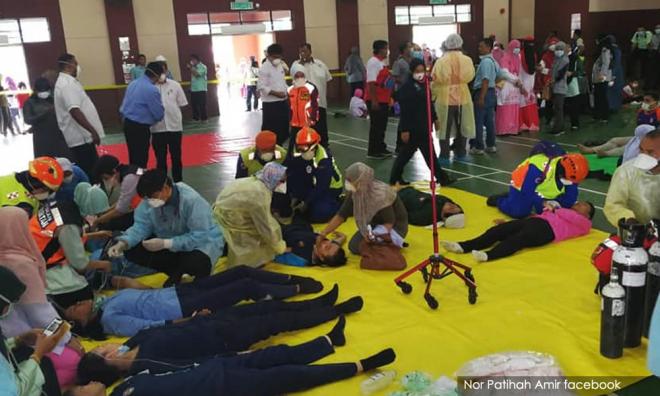 The headmaster of SK Tanjung Puteri Resort in Pasir Gudang, Johor, believes it was the winds bringing an unpleasant odour that caused the pupils to feel unwell today.

Mohd Asri Abdul Kadir said it was a clear, fresh morning and lessons were in progress until about 9.45am, when some of the pupils complained of breathing difficulties, nausea and vomiting.

“I believe the winds may have blown towards the direction of the school bringing with it an odour that had caused the pupils to experience the symptoms,” he told reporters at the school today.

He added that while they were unwell, none of the school’s 857 pupils had fainted. He then instructed them to gather at the assembly area to ensure they were all safe before coming up with a follow-up action.

Students who suffered from the symptoms were then taken to Taman Pasir Putih Community Hall where health officials were summoned to examine them and provide the necessary treatment from 10am to 11.30am.

He said that after the incident, officials from the Department of Environment (DOE) had come to the school to check on the air quality. There was no pollution and, at the same time, confirmed that the incident could be as result of the sudden wind conditions .

"Firefighters and rescue personnel then ordered the closure of the school and instructed staff and students to return home at 11.15 am," he said.

Meanwhile, it wasn’t just the primary school pupils who were affected. The same symptoms were also experienced by the secondary school students from SMK Tanjung Puteri Resort.

Alya Mahirah Ahmad Syirajudin,15, who sought treatment at the community hall said she had been smelling something unpleasant from about 9am.

The smell had caused her and some of her friends to have breathing difficulties.

Her schoolmate Adiputra Rosli, 13, said he felt nauseous while he was walking home earlier today after the authorities ordered the school to be closed.

He was then taken in an ambulance to the community hall where he was examined and treated.

This was after they fainted, vomited and suffered from breathing difficulties following the inhalation of methane fumes from chemicals dumped into Sungai Kim Kim near the schools.

The schools were then ordered to be closed by the authorities.