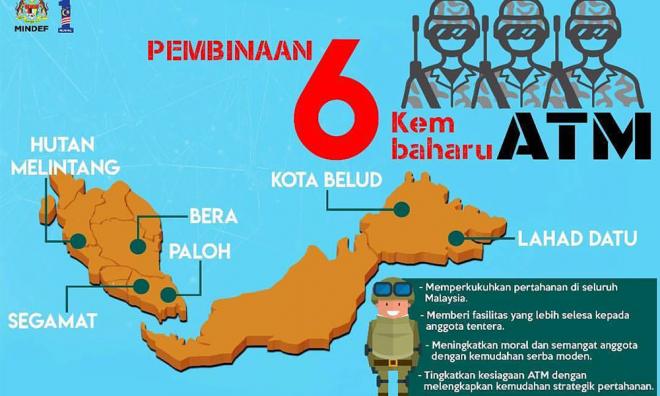 Mindef wants to proceed with Paloh and Hutan Melintang camps

The Defence Ministry (Mindef) will seek approval from the Finance Ministry to proceed with the construction of military bases in Paloh, Johor, and in Hutan Melintang, Perak.

It explained that the military camps had to be completed to provide new accommodation for military personnel and their families, while giving the local economy a boost.

This was said in a parliamentary written reply to Kluang MP Wong Shu Qi, who had sought confirmation on whether the military camps in Bera, Segamat, Paloh and Hutan Melintang would be built, due to political considerations.

In response, the ministry said investigations by the Governance, Procurement and Finance Investigating Committee (JKSTUPKK) had suggested that the new camps were planned with political considerations in mind, rather than the government's interest.

"However, the plan is to continue with (the Paloh and Hutan Melintang) camps because they were already underway," the ministry said.

Last month, Defence Minister Mohamad Sabu had revealed that the construction of these two camps involved land swap deals with private firms, and that the military was on the losing end.

Mohamad also claimed that the construction of the two camps, along with another two in Bera, Pahang, and Segamat, Johor, had been initiated under the previous BN government with political purposes in mind.

All four camps are located in constituencies where top BN leaders were fielded as candidates during the 14th general election.