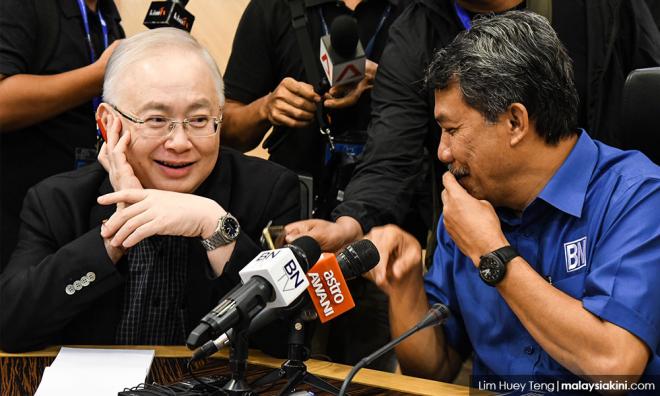 YOURSAY | ‘Dignity can be laid to rest over survival – it doesn’t put food on the table.’

Durian: As much as I don’t agree with former minister Mohamed Nazri Abdul Aziz’s politics, his read on MCA – that they are choosing to stay in BN because of Umno’s strength – is 100 percent correct.

When BN lost Putrajaya, MCA leaders who inherited the party were likely worried – not about their political future, but about whose wealth would continue to support them as ‘macai’ (lackeys).

However, the by-election victories in Cameron Highlands and Semenyih probably led MCA president Wee Ka Siong and his gang to believe that not all hope is lost just yet.

Who cares whether Umno and PAS are banding together to shout about Malay rights, the bottom line is that MCA will hang around as there is a chance that they will taste the crumbs again, even if PAS is to get a bigger bite of the cake.

It takes an insider to say it, as Nazri’s words carry a million times more weight.

Warrant Addict: I have got to agree with Nazri here. MCA and MIC are smart, unlike Gerakan and Parti Pesaka Bumiputera Bersatu (PBB), which ditched BN in the post-GE14 chaos.

See now the solid uptrend of the Umno-PAS combination in winning the last two by-elections, with the Rantau polls, to be contested by acting Umno president Mohamad Hasan, just around the corner.

Fair Mind: What strength? Only yesterday PAS said it pitied Umno. Even more pitiful is MCA, relying on a pitiful Umno for a sprinkling of Malay votes.

Lodestar: Kepong MP Lim Lip Eng and the rest of DAP should mind their own business. Why are they so upset at MCA's decision?

Is it because they know that MCA will fade into irrelevance the moment they leave BN? Are they afraid that MCA could start clawing back some community support by remaining in BN?

MCA wishes to remain in BN to moderate the extremism of the Umno-PAS alliance. Is that not a noble goal and a service to Chinese Malaysians? What if the worst happens, and the Umno-PAS alliance captures Putrajaya? Are the Chinese happy to have totally no representation in such a government?

Many may be of the opinion that it's useless to try and moderate the racial and religious bigotry of Umno-PAS but how is giving up a better solution? The fact that Nazri was forbidden by Umno from attending the BN supreme council meeting shows that the MCA already has had some success in moderation.

Chinese voters have almost totally abandoned MCA, yet they still feel that they have a right to abuse the party for making a decision to stay in BN.

What has near absolute support for Pakatan Harapan gained for the community? The truth is, nothing.

They are not getting more public university places or public service jobs, there has been no reduction of special bumiputera privileges, no ratification of the International Convention on the Elimination of All Forms of Racial Discrimination (Icerd), not even recognition of the Unified Examination Certificate (UEC).

Instead, we are told that the government will investigate racial discrimination in job applications in the private sector – read: Chinese employers discriminating against Malays. Chinese support for Harapan is now taken for granted, and they may have sold their votes too cheaply.

The best strategy for the Chinese would be to split their support between Harapan and BN so as to force both coalitions to compete for their votes.

Fairview: DAP need not interfere with MCA’s decision on its own future. Let the voters decide.

What DAP should be focusing on is making sure that Harapan does a good job as the new federal government. The country needs a strong two-party system and MCA needs a strong Malay party partner, and there are currently no others except Umno.

Most people are aware that MCA was just doing a ‘wayang’ (drama) by first wanting BN dissolved then resolving to stay with Umno.

Voters will take all these into consideration when they next vote. DAP needs to remember that voters are also watching it to see how it is behaving and performing in the new government.

MCA chooses to stay in BN to keep it multiracial

S Kumar: It is simple, it is a matter of survival. Dignity can be laid to rest over survival. Dignity will not put food on the table. But will the food digest, as MCA has been shunned, condemned, ridiculed, told to get out of BN, but yet decided to stay?

But then again, beggars will be beggars – they can't and will not change as they enjoy the taste of the easy life. Let anyone make disgraceful comments, MCA will let it pass from the right ear and out the left.

MCA will let Umno trample on them, and it won’t matter as long as the handouts continue to come.

Freethinker: MCA leaving or staying in BN makes no difference to the direction of the Umno-PAS pact. MCA can either to choose to disembark now or later.

Why stay when MCA knows well it has no influence nor control on what the ‘new BN’ of Umno and PAS are going to do?

MCA as usual, have no guts to do the right thing, but only hinge on Umno for their survival.

Lodestar: @Freethinker The question is why is it the right thing for the MCA to leave BN?

Basically, the idea seems to be that they shouldn't be helping Umno-PAS win Putrajaya. But hang on, haven't they already lost almost all Chinese support? MCA can't even win a single seat on its own. Without BN's Malay vote, Wee wouldn't even have a seat.

So by staying in BN, they do nothing to assist Umno-PAS, but there is a chance that they can moderate the alliance.

And if the worst happens with Umno-PAS capturing Putrajaya, at least the Chinese still have a seat at the table. The scraps fed to running dogs may be better than outright starvation.

Existential Turd: The fact of the matter is, there is only one race that matters in BN, or for that matter, Harapan. It is just a pretence that MCA can keep BN multiracial.

MCA survives on handouts from Umno, so when it finds the former to be less than useful, it wants a second (third? fourth?) wife. There is nothing MCA can do, besides swallow their pride and grin and bear it.

David Dass: The truth is that MCA and the MIC cannot exist on their own. At this point in time, they do not really represent the Chinese and Indian communities. They exist only as a historical relic.

They say that they stay with Umno to keep it moderate. But Umno with PAS are no longer moderate. They have abandoned their moderate policies and position of the past.

PAS wants an Islamic state. They want hudud law. They say no Muslims can ever be equal to Muslims. And they say that non-Muslims cannot be in the cabinet or occupy senior positions in government.

The joint positions taken by the Umno-PAS alliance reflect ‘ketuanan’ policies and principles. Does MCA really expect the keep the new alliance between Umno and PAS moderate? Come on.