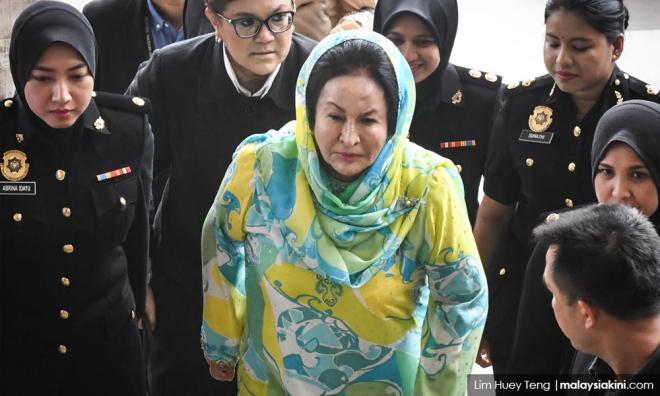 The prosecution has filed an application for a joint hearing of the corruption and money laundering cases facing Rosmah Mansor, who is former premier Najib Abdul Razak’s wife, and the corruption case involving Najib’s former special officer, Rizal Mansor.

Former Federal Court judge Gopal Sri Ram, who has been appointed as a senior prosecutor, informed High Court judge Mohamed Zaini Mazlan when the matter came up for mention today.

Zaini then set April 24 for mention to know the status of the cases involving Rosmah, 67, and Rizal, 45.

Lawyer Geethan Ram Vincent, representing Rosmah, told reporters after the proceeding that today was fixed to hear the application for the joint hearing (of the corruption and money laundering cases).

"But, it cannot be conducted because only the case on money laundering was registered before judge Mohamed Zaini, and also Rosmah’s failure to declare her income to the Inland Revenue Board (IRB).

"The status of the corruption case on the supply and installation of solar energy to rural schools in Sarawak involving Rosmah is still unknown,” he said.

On Oct 4 2018, Rosmah, who is also represented by lawyers Manjeet Singh Dhillon and K Kumaraendran, pleaded not guilty in the Sessions Court in Kuala Lumpur to 12 counts of money laundering, involving RM7,097,750, and five counts for failing to declare her income to the IRB.

The charges on money laundering were framed under Section 4(1)(a) of the Anti-Money Laundering, Anti-Terrorism Financing and Proceeds of Unlawful Activities Act 2001 and punishable under Section 4(1) of the same law, which provides an imprisonment for up to 15 years and fine of not less than five times the sum or value of the proceeds of unlawful activity or RM5 million, whichever is higher, if found guilty.

On the case involving the supply and installation of solar energy to rural schools in Sarawak, Rosmah was charged on two counts of soliciting RM187.5 million and receiving RM1.5 million two years ago for the projects.

The charges were made under Section 16(a)(A) of the Malaysian Anti-Corruption Commission Act (MACC Act), and faces imprisonment for up to 20 years and a fine of not less than five times the amount of the gratification of RM10,000, whichever is higher, upon conviction.

Rizal, represented by lawyer Ridha Abdah Subri, pleaded not guilty to four counts of soliciting and accepting bribes for himself and Rosmah, amounting to RM5.5 million, involving the supply of equipment and installation of the solar hybrid system for rural schools in Sarawak.

The charges were framed under Section 16(a)(A) of the MACC Act, which provides imprisonment for up to 20 years and a fine of not less than five times the amount of the gratification of RM10,000, whichever is higher, upon conviction.