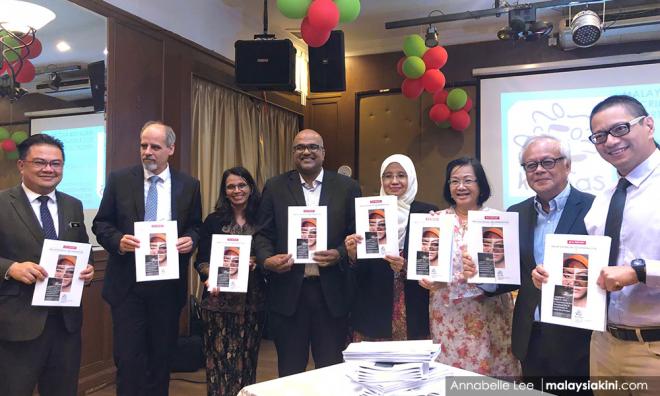 Harapan urged to step up countermeasures against racial politics

The Pakatan Harapan government has been urged to step up its countermeasures against the intensifying use of racial political rhetoric.

At the 'Eliminating Racial Discrimination in Malaysia' forum in Kuala Lumpur today, panellists listed past instances where the coalition failed to answer or address such sentiments.

The outrage against the International Convention on the Elimination of All Forms of Racial Discrimination (Icerd) was one such instance, according to panellist and Suhakam commissioner Aishah Bidin.

Not only did the government cave in and abandon its initial decision to ratify the United Nations treaty, Aishah noted, but Suhakam's Human Rights rally had to be deferred to "make way" for an anti-Icerd rally, which fell on the same day.

"The fact that the government (announced) too soon in terms of saying that we are not ratifying Icerd, I think that provides a loss of opportunity for dialogue, for consultations," she said.

Yap questioned why no action had been taken against these leaders.

“In my memory, there has been no action taken against politicians who have made racial and hate (filled) speeches during elections, they were not disqualified.

“We need to stop the impunity,” he said, warning that such speeches could promote violent acts.

Yap predicted a further increase in the use of racial politics in the next month's by-election for Rantau, in which Mohamad is expected to defend the seat against Harapan candidate Dr S Streram.

As the government, Yap said, Harapan should fight such rhetoric with facts.

"For instance, the issue of the appointment of Richard Malanjum, the so-called 'non-Malay' (as he is labelled by the opposition), as the chief justice.

"Malanjum is actually a native of Sabah and he is a bumiputera. That kind of misinformation is a misconception of the law. And it gives rise to the idea that it is a threat to the status of Malays.

"It is really the responsibility of the state, the government of the day to clarify all these issues, and put out the correct information and messages," he added.

From the audience, lawyer Siti Kasim (above) pointed out that the coalition had not sufficiently utilised government machinery to correct this misinformation.

“We have a serious problem when our government fails to actually rise to the occasion and shoo away the things said by the opposition.

"I just feel that there is a lack of information coming from our government in saying 'that is not true' (in response).

“I mean, they are holding the (government) vehicles now. They can actually use RTM, television and all the media to actually send out the real message,” she remarked during the question and answer session.

The forum was organised by NGO Pusat Komas in conjunction with the International Day for the Elimination of Racial Discrimination.

The report details incidents of racial discrimination in politics, education and social media.

It recommends that Harapan come up a clear counternarrative against the use of racial politics, and “not take the easy way out by playing to the tune of the opposition.”

The report will next be presented to Dewan Rakyat speaker Mohamad Ariff Md Yusof.