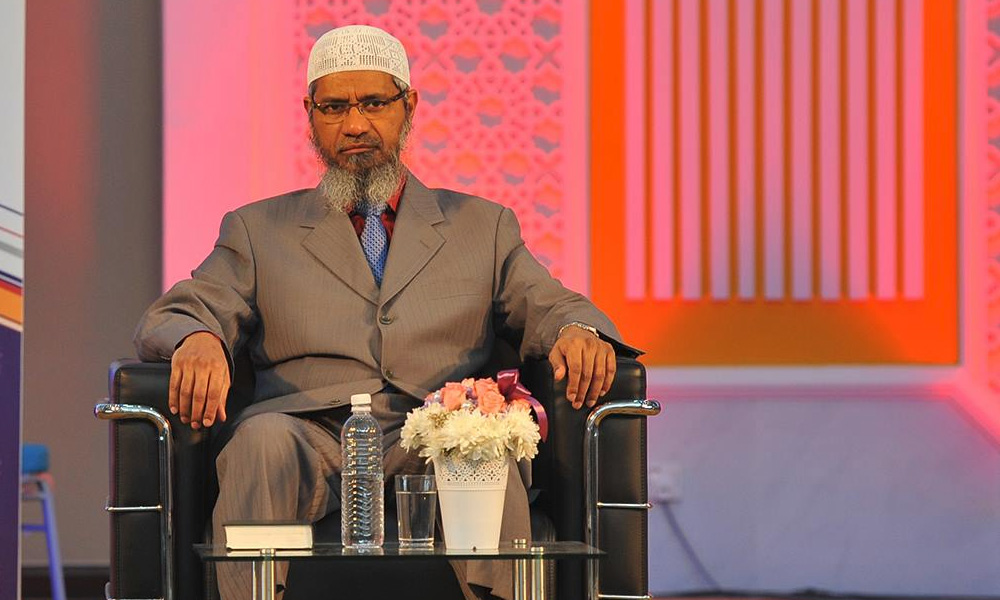 YOURSAY | 'As for the extradition, we are doing to India what China is doing to us.'

Gerard Lourdesamy: How can Zakir Naik be an effective preacher if he is now confined to Malaysia? Apparently, he is too afraid to leave the country to visit other Muslim and non-Muslim countries for ‘dakwah’ activities.

As a Saudi citizen, Zakir should return to Saudi Arabia to propagate Islam from there but even the Saudis now are apparently distancing themselves from Zakir.

So Zakir is left to preach to the converted in Malaysia, which is about 60 percent Muslim. That begs the question, why he is still here? What brand of Islam is he propagating here?

Kangkung: Well, the RM113 million meant for 'Muslim welfare', but allegedly used to buy flats, as well as bank deposits for the whole clan, must be syariah compliant so no one should question it.

Bersatu and Amanah will not accept India's Enforcement Directorate (ED) charges, so why should the world accept Malaysia's charges against Jho Low for laundering funds?

Malaysia is harbouring a fugitive but always preaches to the world that other nations must respect our laws.

MN: India chasing Zakir Naik is like how we are chasing Jho Low.

What both have in common is that they used their considerable allegedly stolen wealth to 'judiciously' influence the authorities in Malaysia and China respectively.

As for the extradition, we are doing to India what China is doing to us.

Harry Mou: Muslim extremists will definitely claim this is a cooked-up story by the Indian government.

To confirm whether it is true, I suggest Wisma Putra (Foreign Ministry) requests for details and publish it.

We must settle this matter with India. We should not let Zakir Naik stand in the middle of good ties between our two countries.

Newday: Of course, Zakir is wealthy. Look at his lectures, TV shows, etc. He is a celebrity.

Allegedly diverting funds for personal use, however, is ‘haram’ and he and his family know it. If true, he is no different from the American evangelical preachers who have amassed enormous personal wealth, thanks to their blind followers.

No matter, they will be judged for their abuse of the faithful here on Earth (Zahid currently) and in the hereafter.

New Beginning: If he had laundered money, it doesn't matter if he is a Muslim scholar, he needs to be investigated.

Money laundering is a crime and if the accusation is true, deport him to the Indian authorities. The Pakatan Harapan government, and especially Minister in the PM’s Department Mujahid Yusof Rawa, please do the right thing.

Please do not harbour an alleged criminal, even if he is a renowned Muslim scholar. Wrong is wrong.

Ravinder: “We don’t want a debate that ridicules others. We need a more intellectual and composed method of Islamic propagation, without the need to ridicule other religions,” said Mujahid.

Mujahid ‘mudah lupa, kot’? (easily forgets?). He is now hugging and giving a red-carpet treatment to the very same person who is ridiculing other faiths.

Is there a political gain to be made by the hugging and giving VVIP treatment to the person who preaches that "every Muslim must be a terrorist"?

RM2.6 Billion Turkey Haram: Malaysia should send Zakir Naik back to India to face those charges. It is mind-boggling that we value him, a wanted man, more than our diplomatic ties with India.

What is so special we see in Zakir Naik that he cannot be traded for the world? We must remember that every dog has its day. There would come one of these days that we may need India's cooperation to help us in some ways.

AnotherKomentar: A radical in India and elsewhere but a darling in "moderate and new Malaysia" - what an irony. Another first, even for Malaysia.

Abasir: Perhaps now is the time for China to publicly declare that Jho Low is there as its honoured guest since he has not committed any wrong there.

And when former finance minister Daim Zainuddin gets there to negotiate a way out of the crippling contract, it should host a dinner for him at which the elusive money launderer should appear as a special invitee.

That should teach PM Dr Mahathir Mohamad and his ‘ketuanan’ ilk something, provided he is still capable of learning.

Like Mujahid, former PM Najib Abdul Razak can well say in his defence that he too was inspired by this alleged Indian money launderer to do what he did for the good of the ummah and all that.

Given that PAS leader Abdul Hadi Awang has accepted that there is a syariah-complaint category of lies, who is there to say there is no such thing as syariah-compliant money laundering?

Perhaps it is time Bank Negara sets up a special syariah section which automatically blesses all shady transactions by the faithful.

With Mahathir unable to shed his habits, the country is getting more ridiculous by the day.

Cogito Ergo Sum: Truly inspiring! Mujahid must now be in ecstasy with this latest news report. Using funds meant for the welfare of Muslims ‘inspires’ our minister but I hope he does not emulate Zakir Naik.

On that, Mujahid has been beaten hands down by Bossku and his merry band of thieves. Why can’t Harapan ministers do what is considered acceptable behaviour?

Even if Mujahid admires this man, he should have just kept silent instead of letting the world know he is a fool. Now, go and lose Rantau.

Quigonbond: So Mujahid used a shotgun and blew off his entire foot praising Zakir as inspirational. Absolutely brilliant move.