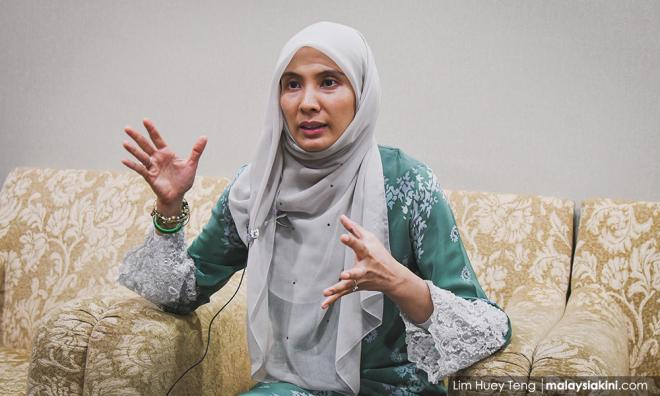 Yoursay: Reading between the lines of Nurul’s criticism

YOURSAY | Her opinion and the reactions that followed say a lot about Harapan and its members.

Why must we play into the hands of PKR deputy president Azmin Ali who wants to divert the issue to Nurul personally as being someone who keeps complaining?

She is indeed correct to be disappointed with Prime Minister Dr Mahathir Mohamad’s delay in implementing a simple Pakatan Harapan manifesto promise that the Public Accounts Committee (PAC) chair should be from the opposition.

Instead of focusing on governing, Azmin likes to aim fire at his own PKR colleague for his own political gain despite working with Nurul for many long years.

The Wakandan: What people seem to gullibly believe is that Nurul was commenting out of principle, which made it fine, it was all right.

Sure, anybody can comment and criticise. It is not just Nurul but other backbenchers have done that quite often.

What people do not seem to see is that there is a bigger picture at play here. This is all about proxies.

It is not just criticising Mahathir per se, it is perhaps more of a power play between the factions in PKR and overall in Harapan.

We have to read between the lines and see who were involved in the act.

Anon 2: Nurul speaks the truth. Mahathir has been a big disappointment, reverting to his old politics of divide and conquer.

The promised changes by Harapan in their election manifesto have not been realised and all we have now are those inept from Bersatu running some states and ministries.

Mahathir, as a leader, should not be constantly reminding the Malays that they need government support (meaning his government) all the time. How can they progress if crutches are on offer all the time?

Frankie: Yes, spoken like a hero and sticking to your scripts past and present, really make you stand out among the rest.

We have too many who'll change according to the situation (chameleon/frog/apple polisher).

Big Data: Do not rock the boat. Let bygones be bygones. Mahathir played a pivotal role in GE14.

Let bygones be bygones? Weren't these all rakyat's money?

Durian: Please spare me your stupid justification, Nurul. If you and your family cannot work with a dictator, please quit.

You campaigned together with a dictator willingly. You and your family have earned enough, period.

Don’t be a sitting MP and do nothing and earned your “gaji buta” (undeserved remuneration). Why stay on?

Anonymous_7d1ca773: Nurul, either you have a hidden agenda by openly criticising the PM or you are just too idealistic to expect all Harapan manifesto promises to be fulfilled overnight.

You should ask your mother, who is the deputy prime minister, the challenges of rebuilding a corrupt nation.

Rest assured that if your father was appointed PM after GE14, the country would be worse and chaotic by now because he is no match to Mahathir to bind Harapan components together and, at the same time, defend the country from racial and religious politics from Umno and PAS.

This is the time to be united rather than throw stones. Or else just resign from your MP position and let others who are more resilient get a chance to serve the country.

LetTruthandJusticePrevail: Indeed, why go all the way to London to seek help from your so-called “former dictator” preceding GE14 if you are so bent on sticking to your so-called principles?

Lodestar: I am on Nurul's side. Those who criticise her may not have lived through those seismic years when her father Anwar Ibrahim was torn down and vilified in the cruellest way imaginable, a deed for which he has never apologised to Anwar or to the nation.

We all thought that he has changed but he is in fact still a dictator. Just see how he is staring everyone down in the PAC fiasco, even with both sides of the political divide united against him and the whole point clearly set out in the Harapan manifesto.

We can only be thankful that there is one thing that he cannot stare down i.e. old age. We all applauded Mahathir's unselfishness in coming back to "save" the nation but Anwar's magnanimity in forgiving him for the good of the nation is often forgotten.

Harapan and my family back Dr M as PM: Anwar

People Suffer: Harapan will lose Rantau by-election. That is what some “traitors” want. When they lose, they will shift the blame on Mahathir’s administration (our new scapegoat).

There seems to be more “traitors” now than before. The sad thing is that they have turned out to be “traitors” sooner than expected - to those who voted for them thinking that the leaders will work in unity and address the people’s problems.

But today, the leaders themselves are the problems for the people.

Badril: I think if there is positive criticism, Dr M can take it. Making a statement on the whims of emotion and personal feeling as all Malaysians do is normal.

Singapore is very happy because we can’t get our act together and our dear Nurul just played into their hands by sharing her innermost thoughts.

Buatapa: This is not PKR president Anwar Ibrahim playing both sides. He backs his daughter who, after all, stood by her old man through his brutalisation by Mahathir.

But in fact, he’s only playing one side, knowing he can’t afford to rock the boat that might sink his prime ministership ambitions or dent them somewhat or undermine his self-professed political authority and legitimacy among his largely cretinous colleagues in Harapan.

ChuenTick: Your political doublespeak is beyond me, Anwar. Be that as it may, I wish you well - that the old dictator taking shape in front of us will not outfox you and deny you the transfer of power promised.

Nurul will be too deferential to speak out to rebut you but what was reported in Singapore’s Straits Times is crystal clear.

Shanmugam V K Subrayan: Anwar has to take a firm stand to control Azmin and his gang of boot-lickers before they cause permanent damage to Harapan in general and PKR in particular.

What credibility has Azmin and his aspiring son-in-law got to run down a principled person like Nurul?

Zen: This is a clear sign that this government is so fragile. So fragile that it would crumble if Harapan did not engage damage control mode immediately.

When he did not get his crooked bridge, he got Abdullah Ahmad Badawi replaced by Najib Abdul Razak. When his son was removed as Kedah menteri besar, he got into the 1MDB bandwagon and got Najib removed.

Now, of course, as he cannot remove himself, he has baited Azmin to wreak havoc on the coalition, maybe with the idea of staying on beyond his stipulated two-year agreement.

I dread to think what charades are going to get played out as Anwar stakes his claim.