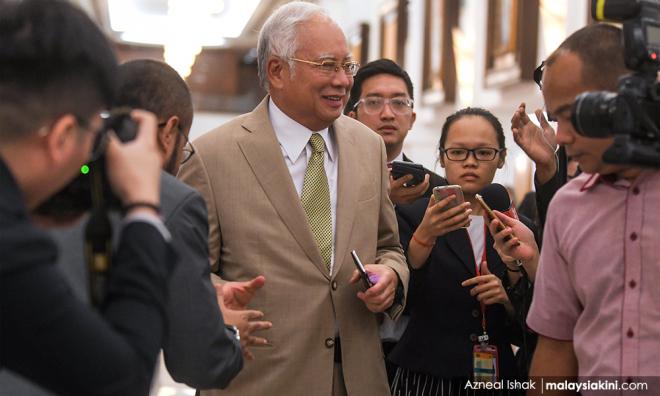 Yoursay: Go after all politicians, not just Najib, for tax dodging

YOURSAY | ‘This should strike fear into the hearts of the Umno warlords.’

What are the steps taken by Inland Revenue Board (IRB) to ensure this payment is made?

Issuing a letter of demand is not sufficient, and if IRB is really serious about this, it must immediately initiate steps to get the money, charge him in the court, forfeit all his money, properties (both in the country and overseas) immediately.

From what we see, despite all the court charges for corruption and money laundering, tax evasion, etc, Najib is still living in luxury. What say you, IRB?

Anonymous_f9c658c: Correct me if I am wrong, but I thought I read someone from IRB saying that the ‘donation’ Najib received is not taxable. Why the change in tune now?

Roar For Truth: This only goes to prove even IRB is politically manipulated. Now poor Najib is the victim.

Prior to BN losing power, it was anyone associated with then opposition leader Dr Mahathir Mohamad who was harassed by IRB.

When will IRB start working for the nation? For now, it is nothing but a political tool of the government of the day.

Not that I am against Najib being taxed, but let it be done according to our income tax law and not as political harassment.

Anonymous 2465861491622056: The IRB director-general or its officers concerned should be charged for dereliction of duty as they did not impose the tax on Najib when the issue of donations came up a few years ago.

By not imposing tax then, the country lost a huge sum of revenue. Although it is better to be late than never, these civil servants should not be allowed to escape the law.

Kahlil Gibran: How did they (IRB) come with this figure (RM1.5 billion)? Can the government explain to us because Najib may have acted wrongly but we, the New Malaysia, will need to follow the rule of law at all times?

Slumdog: I wonder whether the RM1.5 billion tax includes penalties for not declaring the “donations” and interest for delays in paying the tax?

Najib’s hotshot lawyer will have to be next in the sights of the IRB and he must be experiencing pangs of distress and discomfort for allegedly not declaring the RM9.5 million he received from Najib for services rendered.

Fair Play: This could a pre-emptive move. All incomes, legal or illegal unless tax exempted, are subject to tax.

A royal pardon, with the power exercised by the Agong, could be granted. But Najib has still to pay his tax or go to jail.

It’s not easy to cough out one hundred million, much less RM1.5 billion. Besides, the source could be traced which might lead to more complications under anti-money laundering rules.

Anonymous_5609e49b: For once, this king of the kings is taught the rule that "No one is above the law."

Such belief that the ruling politicians are above the law has been practised for far too long and thus the damage to the country today.

Go after each and every one of these animals who has been abusing the system for far too long. This is the only way to show future ruling parties that you do not become a politician to rob but to serve.

Meerkat: Yes, this should strike fear into the hearts of the Umno warlords. Najib has dug his own grave. He had already admitted to receiving the money. What he does with it is up to him.

Whether he can claim that his "return" to the donor (if he can prove it, that is) can be offset against his income is a moot point and I don't fancy his chances against the IRB.

The IRB should place the onus of proving the wealth of the Umno ex-ministers (and other rich tax under-paying personalities, including some princes) on the owners.

If they don't come up with legitimate provable sources of income, charge them with the tax evaded and slap on heavy penalties.

That should be enough to lock them up under the Income Tax Act, while the authorities investigate them for other crimes, like money laundering, corruption, etc.

FellowMalaysian: No doubt, Najib will claim that he doesn't have the wherewithal to pay IRB as he has 'returned' much of the 'donation' of RM2.6 billion back to his ever-generous Arab benefactor.

Anonymous_b3cdcd05: Whatever it is, the donation ought to have been declared when he received it in 2013. If he had intention to return part of it, he should have informed the tax authorities then.

Now that he has been caught not declaring this income, he will be treated as cheating on his tax return and charged under the law.

As for his claim of having returned part of it, that is another grandmother story for another day. Maybe his ‘partner-in-crime’ can help him on this one.

Headhunter: It’s about time to use this on him. You can't have so much money, donation or otherwise, without paying tax.

The IRB must also go after other politicians who are living beyond their means. And don't forget the family of Abdul Taib Mahmud, Musa Aman, Jho Low and the self-styled first lady.

If the authorities can't prove their money and properties are stolen from the people, they can certainly prove they didn't pay tax according to their fortune. There are billions out there to be collected from those crooks.

Frank: Najib has been in politics for four decades. For sure, he has to pay multiple of that amount.

But in the first place, his money is largely money that he and people close to him have allegedly stolen - like there was no tomorrow - from the rakyat.

Hence, shouldn't this money be confiscated anyway instead of having tax imposed on it? And why him alone? There are thousands like him in the rest of the political arena, civil service and GLCs (government-linked companies).

Surely, we do not want this trolls king and gang members to accuse us of being discriminatory, do we?

Abasir: If this is a witch hunt, they really don't have to hunt. Everyone knows where the witch is.