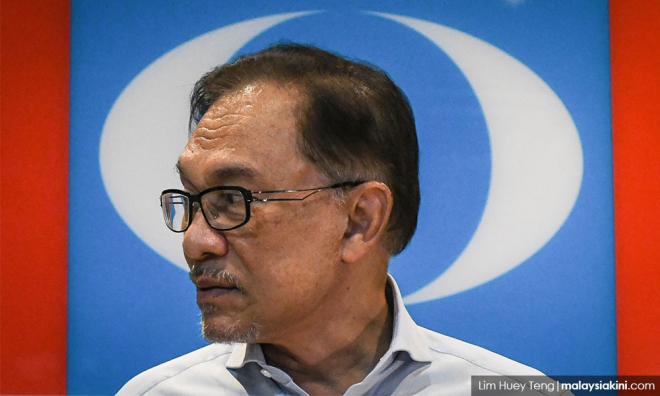 'PKR helped to end arrogance, destructiveness of those in power'

In conjunction with PKR's 20th anniversary, Anwar Ibrahim today listed putting an end to the arrogance and destructiveness of those in power as among his party's many successes over the years.

Crediting the party's supporters, the PKR president noted that they had to undergo numerous trials and tribulations not only to fight for justice on his behalf, but to push for the overall reform of the country's administration.

"Our efforts should not end here.

"In fact, it must and should be interpreted through efforts to rebuild the nation, which have for so long been plundered.

"The arrogance and destruction have been successfully stopped," he said in a statement today, adding that PKR supporters must learn from the country's history to strengthen its future.

Keadilan was first founded on April 4, 1999 with a call to fight for justice for Anwar, who had been sacked as deputy prime minister by Dr Mahathir Mohamad a year prior.

It later merged with Parti Rakyat Malaysia to form PKR.

Twenty years later, it forms the largest component of the ruling coalition Pakatan Harapan in terms of parliamentary representation.

In the same timespan, Anwar has gone from being cast out by Mahathir to becoming his designated successor as the eighth prime minister.

Speculation has been rife that the agreed upon transition plan could be derailed, with PKR deputy president and Economic Affairs Minister Azmin Ali tipped to be made deputy prime minister in June.

Azmin, however, said on Tuesday that he was in the dark over such speculation.

Mahathir himself has repeatedly insisted that the reins of power will be handed over to Anwar – even reiterating it yesterday – and that there is no rift between the two leaders.