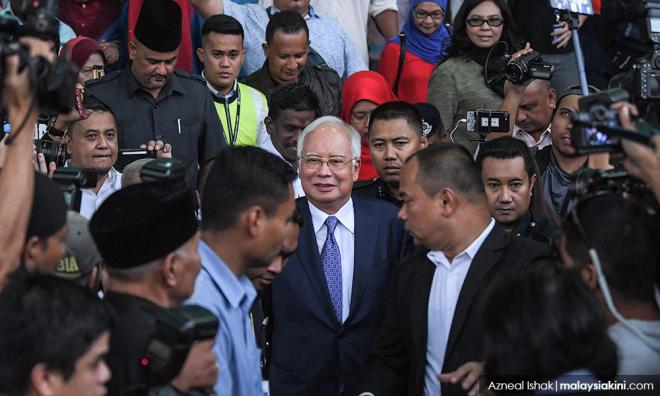 YOURSAY | ‘I think Najib might be in a deeper hole than he thinks.’

Fairplay: For those who have debated at length whether foreign donations are subject to income tax, perhaps the key single key point is overlooked.

The Inland Revenue Board (IRB) sent former PM Najib Abdul Razak a notice of assessment (or a letter of demand) in regard to undeclared income of about RM4 billion for the period of 2011 to 2017 and the tax due of about RM1.5 billion.

But Najib sensationalised the entire issue about foreign political donation. Under IRB guideline, once a notice of assessment (or a letter of notice) has been received, the amount of tax has to be paid within the date stipulated.

The rule is quite simple - pay first (within the time given) and appeal against the assessment or letter of demand later. Therefore, he will have to pay the RM1.5 billion within the date stated in the notice of assessment and after that, file an appeal. This may take a long time to settle.

And second, which tax agent is willing to act for Najib? Where and how he is going to get the money to pay - from a local or foreign source? His bank accounts locally are all frozen.

I think Najib might be in a deeper hole than he thinks. Using the foreign political donation mantra won’t help him even one tiny bit.

Anon 93751028: Since he has to pay first and appeal, he should be discussing a payment plan with the IRB.

I'm sure they'll let him spread it over a year to make it easier for him and if he wins his appeal against the amount, he'll either get a refund or have the monthly payments reduced.

So, there is no need for Najib to squeal to the public about it being a donation, we aren't the ones who will decide on the matter.

Panorama123: My tax consultant confirms that monies “earned” overseas and remitted into Malaysia is not subject to tax.

However, Najib needs to provide solid evidence on the source of donations. He cannot claim that it is political donation since the monies did not go directly into Umno’s bank account but remitted into his personal account.

If proven that the monies derived from 1MDB/SRC, he will be subjected to tax in Malaysia as 1MDB/SRC are companies domiciled in Malaysia.

GMan: @Panoram123 Your tax consultant is correct with one very big error. Any earnings from overseas but due to work conducted/employed in Malaysia is taxable under Malaysian tax law.

He was the PM of Malaysia and hence working for and in Malaysia. Anything earned whether domestic or overseas is taxable unless he was employed overseas in another job - which he wasn’t.

Prudent: @GMan Your tax consultant is also wrong. If Najib earned the money in question overseas while living overseas for more than six months of the year for which his income is calculated for tax, then he is deemed a non-resident for that year and therefore not liable for Malaysian tax.

But we all know that he was living in Malaysia and was never out of the country for more than six months of any one year during the period reviewed by the IRB.

Panorama123: @Prudent It’s too technical for an old man like me as it is subject to different interpretations based on the actual situation of residency, employment status, political donation, etc.

In any case, based on my limited taxation knowledge, I can agree that as Najib is a tax resident in Malaysia and the RM2.6 billion was received in his personal bank account, the amount is taxable.

The burden of proof is on him to substantiate his argument with clear and solid documentary evidence.

Flamescanner: If income from foreign sources have already been taxed at source (that too if there is a binding double taxation treaty), then your income won't be taxed in Malaysia.

In this case, I don't think your 'income' was taxed at source. With the 'political donation' claim that you made, I think you have dug yourself into a hole. I don't think our laws allow for foreign political funding, does it? I will defer to the experts on this.

Anonymous_1527925538: Yes, political donations are only those that goes into a political party's account, not a person's personal account.

Otherwise, all bribes and illicit money will be remitted from overseas into a criminal's personal account as 'political donation'.

Bravemalaysian: As a layperson, I think that since the money went into your personal bank account, and there was no accountability on how the funds were disbursed, this has to be taken as personal income.

If it was banked into Umno's account directly, I don't think this would have been an issue. Even Umno members didn't know how much you received.

Further, this "donation" has its question marks, whether this is indeed from 1MDB. The impending court cases should show clearly whether indeed that you are a thief. And even a thief's income is taxable.

KingKriolle: Najib Razak aka MO1, the burden of proof is on you to show that it is a political donation. Clearly, one niggling question though is why it was deposited into your private account instead of Umno's account.

Secondly, why many Umno leaders including then deputy president Muhyiddin Yassin were not aware of the donation until it was leaked out by a third party.

Thirdly, why did you close the account at Ambank soon after you "returned" the bulk of the donation to the donor? Were you trying to cover your tracks?

Fourthly, if it was indeed a donation, why did you return the bulk of it to the donor, something any right-thinking person will not do.

These and many other questions will have to be answered by you Najib Razak aka MO1 if your claim of tax exemption is to be considered by IRB.

Anonymous 5237890145285379: I am surprised that a head of a political party can accept foreign donations to influence a local election. Isn’t that political interference?

Funny how a political donation ended up in a personal account. Yes, the government is powerful. You should know, Najib. Didn’t you turn the IRB on Dr Mahathir Mohamad previously or to his supporters? So, isn’t revenge sweet?

Cyclonus: I know how you feel being victimised at every turn - it really reminds me of the time when I spent weeks tendering for a job only to be victimised by some Umno crony or corrupt government official who wanted a cut to get it approved and then only found out later that the job was won by some other Umno crony who bid higher than me. Yes, it hurts, doesn't it?

This is on top of the debts and interests that was piled up because the Goods and Services Tax (GST) refund was late (wonder why the government had no money then?).

Yes, life really sucks if you're not in power or a crony. But what to do? We just grit our teeth and move on to scrabble for the crumbs that fall off the gravy train.

But being an aristocrat, you're not used to begging for jobs and being thankful for whatever scraps you get just to pay the bills.

Being someone born with a silver spoon with a total disconnect with the ordinary rakyat, you're not used to being snubbed, questioned, probed and jumping through all the bureaucratic hoops to get things done in real life. Yes, we can really relate to you.

Anonymous_b3cdcd05: If RM2.6 billion was a political donation, then what was SRC International's RM42 million channelled into your account? The sum your friend, former attorney-general Mohamed Apandi Ali, claimed you were not aware of.

Was that also political donation?