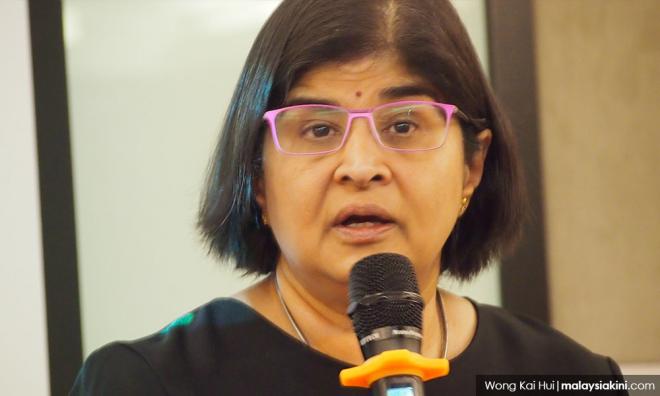 Cabinet ministers should have been present when Prime Minister Dr Mahathir Mohamad announced that Malaysia would withdraw from the Rome Statute of the International Criminal Court (ICC), according to former Bar Council president Ambiga Sreenevasan.

She said this should have been the case since de facto law minister Liew Vui Keong later described the announcement as a collective cabinet decision.

“They ought to have been present with the prime minister to make the announcement, whether they agreed with it or not. Or whether they felt compelled to or not.

“They must all take responsibility for this decision which I believe is an embarrassment particularly as it shows a total misunderstanding of the ICC,” she told Malaysiakini this evening.

Describing the decision to withdraw as a mistake, Ambiga pointed out that Malaysia is not an island and cannot stand in isolation from the rest of the civilised world.

“Why did Malaysia under BN rush twice to sit on the Human Rights Council and then turn around and refuse to accede to basic human rights instruments? Why did we sit on the HRC then?

“It is the height of hypocrisy. The politicians who used this as a means to further their agenda have done Malaysia a disservice,” she added.

In a subsequent posting, she said the Pakatan Harapan administration has the right ideas but self-serving politicians are making it difficult to bring about real change.

'Facts and truths no longer matter in post-M'sia Baru politics'

Malaysia's Representative to the Asean Intergovernmental Commission on Human Rights (AICHR) Eric Paulsen was also disappointed with the decision.

“Malaysia withdrawing from the Rome Statute is so disappointing. It is undeserving to the government that is trying to do the right thing, to be progressive and be part of a rule-based international community that respects international human rights law,” he tweeted.

He said that in the post-Malaysia Baru politics, facts and truths no longer matter.

“Who cares if you don't know and care to know what the Rome Statute, the ICC and international law stand for?

“The ICC is a court of last resort for the prosecution of serious international crimes i.e. genocide, crimes against humanity, war crimes and crime of aggression. Which part don't you understand?” he added.

Mahathir had explained that Putrajaya decided to withdraw from the Rome Statute because people are easily misled regarding the issue.

On March 4, it was reported that Foreign Affairs Minister Saifuddin Abdullah had signed the Instrument of Accession to the Rome Statute.

Wisma Putra stated that the Yang di-Pertuan Agong Sultan Abdullah Sultan Ahmad Shah had been informed by the minister on Feb 15 of Putrajaya's intention to accede to the treaty.

However, Johor Crown Prince Tunku Ismail Sultan Ibrahim claimed that the government failed to consult the Conference of Rulers beforehand.

Johor ruler Sultan Ibrahim Sultan Iskandar had said ratifying the treaty would violate the Federal Constitution as it would affect the monarch, Malay rights and the sanctity of Islam in Malaysia.

'Cabinet made collective decision to withdraw from Rome Statute'

Legal expert: M'sia can only withdraw from Rome Statute after a year