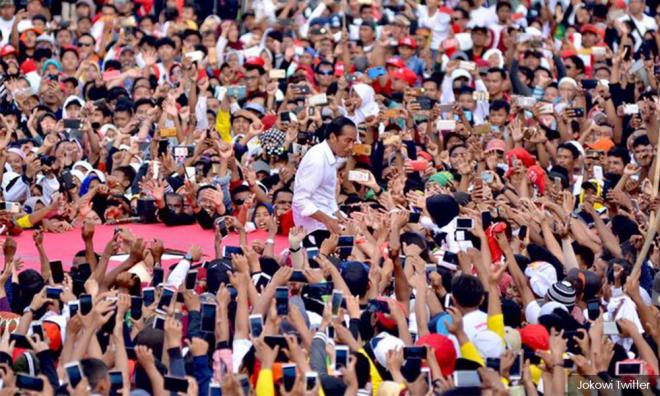 The fake news battle ahead of Indonesia's election

Armed with laptops, three dozen journalists and fact-checkers braced for battle before a live debate between Indonesian President Joko Widodo and his challenger, Prabowo Subianto.

With two giant screens displaying television network feeds in front of them, the keyboard warriors split into six groups, each responsible for fact-checking a segment of the debate.

For nearly three hours, their eyes barely left their screens as they attempted to verify candidates’ comments in real time: allegations about corruption, statistics on the country’s Muslim population, boasts, and even personal anecdotes.

They and other fact-checkers are fighting a running battle against fake news and propaganda ahead of an April 17 election in the world’s third-biggest democracy.

Election monitors are worried that the flow of misinformation stoking ethnic and religious divides could undermine electoral bodies and even raise social tensions.

The Cekfakta (“checkfacts” in Indonesian) initiative brings together the non-profit fact-checking organisation Mafindo and 24 news organisations that normally compete fiercely with one another during election campaigns.

“As a candidate, you cannot throw claims into the air... we will fact-check them.”

Dhyatmika wanted to avoid a repeat of the 2014 election, also between Widodo and retired general Prabowo, when reporters were unprepared for the flood of false news that swept across social media.

The fact-checkers’ adversaries, fake news peddlers, sit at screens too, pumping out misinformation disguised as fact that often exploits ethnic or religious divides.

“We’re in a war for content... people are doing anything they want,” said one fake news creator, who has written stories depicting Indonesian officials as paid off by Beijing. The person declined to be identified because such work is illegal.

Indonesia’s population of 269 million has a youthful median age of just over 30 years, according to the World Population Review.

With more than 100 million accounts, the country is Facebook’s third-largest market and a top-five market globally for its platforms WhatsApp and Instagram, as well as rival Twitter.

Fake news in Indonesia can rack up thousands of views in hours, despite laws against creating and spreading such content.

“There are the factories, the dealers, and the victims. Most of the people who end up arrested are victims... They read hoaxes and believed them to be true.”

Since December, Mafindo has documented a surge in political fake news using ethnicity and religion to target both candidates.

The organisation finds most worrisome the dozens of stories that paint electoral bodies as corrupt. This will be only Indonesia’s fourth democratic presidential election.

Sasmito considers it a good result if fact-checked posts can reach even a small fraction of the audience the originals did.

Mafindo’s work has made it some enemies. The group has received enough threats that it keeps its office address secret; Cefakta’s website was hacked after a previous debate.

A Reuters investigation in March found that both the Prabowo and Widodo campaigns were funding sophisticated social media operations to spread propaganda and disinformation through fake accounts on behalf of the candidates.

Both campaigns said they did not use such teams.

One journalist said he was hired by Prabowo campaign advisers to write positive stories about Prabawo and negative ones on Widodo, to be posted on Facebook and WhatsApp.

He said he was not motivated by money but believes the mainstream media is biased in favour of Widodo.

Fearing government retaliation, the man declined to be named, but he showed Reuters communications that suggested he was he in contact with Prabowo advisers.

He said he wrote only “true” negative stories and cited as an example a post that 2,000 Chinese workers on Indonesia’s Sulawesi island were secretly part of the Chinese People’s Liberation Army.

“We have evidence from government contacts and we can see they are soldiers from the way they look,” he said, declining to share such evidence.

Asked about the Sulawesi allegation, a spokeswoman for the Chinese Embassy in Indonesia replied to Reuters in a text: “Fake news.”

But such claims also make it onto the campaign trail. A Prabowo campaign volunteer in West Java told Reuters last week that millions of Chinese workers had been secretly relocated to Sulawesi.

Reuters found that the creator of the Sulawesi claim had also written stories in 2016 falsely depicting former Jakarta governor Basuki Tjaha Purnama (below) as a Communist stooge of China.

Purnama, a Christian ethnic-Chinese Indonesian ally of Widodo, recently completed a two-year prison sentence for blasphemy against Islam based on a video doctored to make him seem he was insulting the Quran.

The man convicted of making the video, a former journalist, worked for Prabowo’s media team until he was sent to prison last month. A campaign spokesman confirmed he had worked for the media team, but did not comment further.

Social media data gathered by Mafindo, as well as by Indonesian big-data consultancy Drone Emprit, show that allegations using China as a bogeyman are widespread in Indonesia, where suspicions about the wealth of the ethnic-Chinese community and the influence of Beijing run deep.

A disproven video that went viral in January claimed to show seven shipping containers from China at Jakarta’s port filled with millions of ballots punctured in favour of Widodo.

Common misinformation themes against Widodo portray him alternatively as a member of Indonesia’s banned Communist party, a Chinese plant, or anti-Islam.

Prabowo, meanwhile, has been depicted as both impious and planning to create a caliphate, while his running mate has been portrayed inaccurately as gay.

All are inflammatory accusations in the world’s largest Muslim-majority country, which rights groups say recently has seen increased prejudice against religious and LGBT minorities.

And the stories work. Although Widodo enjoys a double-digit lead over Prabowo, three surveys found that a minority of the population believes that he is either a communist or a Christian.

Experts say such polarisation is dangerous for Indonesia and could stoke anger against minorities.

“This kind of fake news gains traction because they’re the seeds of intolerance in our society,” said Cefakta’s Dhyatmika. “And it’s not being addressed.”