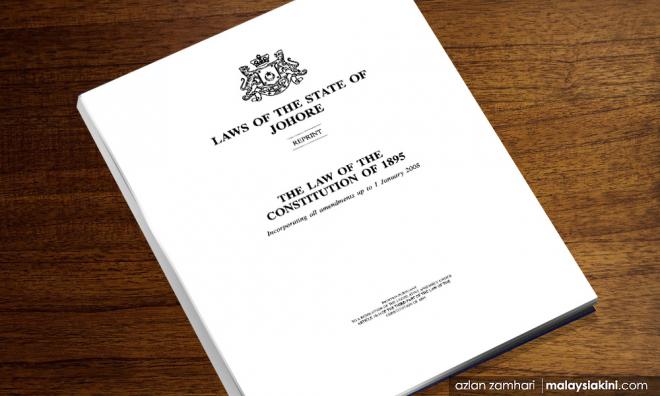 Prime Minister Dr Mahathir Mohamad claimed that the state constitutions of Johor and Terengganu were nullified when the Federation of Malaya was formed.

"The constitutions of Johor and Terengganu, which were promulgated earlier, were nullified by the new constitution which was accepted by all the states...

"It is important that everyone concerned respect the constitution and abide by it. Failure to do so would negate the rule of law," he added in a blog post this evening.

State constitutions in all the Malayan states are the basis for the formation of their respective state legislative assemblies, as well as the guiding law on how a state government is formed.

Mahathir's remarks come after disagreements with the Johor palace over who decides on the menteri besar and members of the state executive council.

Below is the prime minister's blog posting in full:

2. As one, the Malays rose in protest. Such was their unity the British had to back down and abrogated all the MacMichael Treaties. The British agreed to replace the Malayan Union with the Federation of Malaya. Officially the accepted name was “Persekutuan Tanah Melayu”. It reverted to being a protectorate by treaty.

4. In 1955 the British decided to hold partial election for 52 of the 98 seats of the Federal Legislative Council.

5. The British believed that no single party could win more than 49 seats to claim a right to form a majority Government.

6. In the event the Alliance of Umno, MCA and MIC won 51 of the 52 seats and was able to claim the right to form a home-rule Government.

7. Immediately there was a clamour among the people and the parties in the Government for independence.

8. Negotiations were held in London and eventually it was agreed that Malaya would become independent in 1957.

9. In preparation for this, the Reid Commission was tasked with drawing up the independent Federal Constitution.

10. It was agreed that Malaya would be a democracy where the people would choose the Government. The rulers would be constitutional heads without executive power. Their position would be guaranteed by the Constitution which would be the supreme law of the country.

11. The party winning the election would name the Prime Minister (or the Chief Minister – Menteri Besar) and the constitutional head would endorse.

12. Should the constitutional monarch refuse to endorse and proposes his own candidate and endorses him, the winning party can reject him in the assembly – ‘dewan’, through a vote of non-confidence.

14. It is important that everyone concerned respects the constitution and abides by it. Failure to do so would negate the rule of law.

TMJ points back to Federal Constitution to counter Dr M