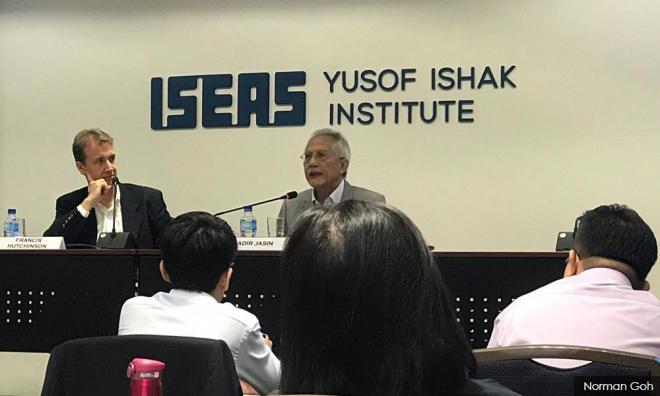 A Kadir Jasin said today that he hopes to see all bilateral issues between Malaysia and Singapore resolved under Prime Minister Dr Mahathir Mohamad's tenure.

Kadir, the special adviser on media and communications to the prime minister, said: "Let us iron out (these issues) if possible, let us get rid altogether of those areas that are causing discomfort in the relationship between the two countries and get on with business."

He was responding to a question at the "Challenges facing the new Malaysia" seminar organised by the Iseas-Yusof Ishak Institute.

A question was raised as to several bilateral issues cropping up after Mahathir took up the helm for the second time, including on airspace, maritime borders, as well as the 1962 Water Agreement.

Kadir assured that there is nothing to be worried about.

“Perhaps, this is an unnecessary, unwanted, uninstructed reaction to the change of government in Kuala Lumpur, to take it in a broad, simplistic manner,” he said.

'As old as history'

According to Kadir, the government at the highest level, particularly Mahathir, is cognisant of this.

“He is a very shrewd economic administrator. He knows.

"He could be making noise about airspace, coastal waters, and cheap raw Malaysian water to Singapore, but that is politics.

“Malaysia is a very vibrant political environment. If you don’t talk, people think you are dead already, or you are not interested. Malaysian politicians have to talk every day,” he said.

Kadir noted that the posturing against Singapore “is as old as history, probably.”

“I’m not so worried about it. But what I’m more interested in is whether Malaysia and Singapore can be a little bit more gentlemanly in our relationship. Be a little bit more open... less gung-ho, less territorial, less nationalistic,” he said.

Kadir pointed out that Singapore is Malaysia’s second biggest trading partner and “it is the reality.”

"It is dangerous for Malaysia and Singapore to look at their relationship based on written words.

“I think it is better for us to look at what is going to happen in the future.”

To another question, also on Malaysia-Singapore relations, Kadir said now both sides can really talk as equals.

Citing the recent meeting between Mahathir and Singapore Prime Minister Lee Hsien Loong at the 9th Malaysia-Singapore Leaders’ Retreat in Putrajaya, Kadir said: “To me, the one big success is nothing negative coming out of that.”