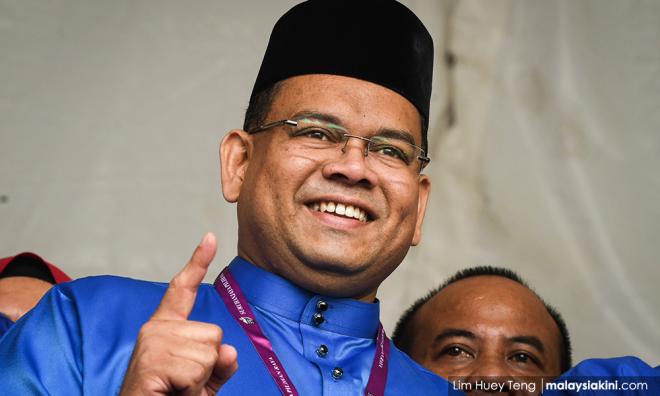 Umno supreme council member Lokman Noor Adam today said his move to publicise a 'teh tarik' session featuring four crown princes was because he did not want the event to be poorly received.

However, he said the circulation among Umno members gave the perception that it was an Umno event, which prompted a postponement.

"The programme is theirs (princes'), I only helped to circulate to encourage people to turn up.

"We love our sultan and crown prince. We don't want people to say that his majesty's programme is poorly received," he said in a statement today.

Lokman said he learned about the event through a friend who was close to Johor Crown Prince Tunku Ismail Sultan Ibrahim.

"I too circulated it and stated that I would be attending.

"As the message was mostly sent to Umno members, therefore it was heavily circulated among Umno members.

"When news of this reached the palace, there was a perception as if the event was being organised by Umno," he said.

Lokman said this led to the intervention of one of the princes' fathers.

"This caused the father of one of the princes who was involved (in the event) to advise him to postpone the programme to avoid slander that the four crown princes were getting involved in politics and attending an Umno event.

Lokman, who announced the event through Whatsapp last night, also accused Malaysiakini of "spinning" the matter.

"Don't entertain Malaysiakini's spin that I was stressed because four crown princes cancelled attending my programme," he said.

Yesterday, Malaysiakini reported that Lokman announced the programme via WhatsApp. There was no mention of the organiser.

Lokman's announcement was accompanied with the following message: "I will be attending the teh tarik session and I will also attend the 'Mega Rally against the Rome Statute: In Defence of Parliamentary Democracy and Constitutional Monarchy' gathering at Dataran Merdeka at 2pm (next) Saturday".

However, an hour later, Lokman said the event may not happen.

A source close to the Johor palace said the crown princes had become upset when Lokman, in his statement, linked the royal event with an anti-Rome Statute rally set for Saturday, which will be attended by Umno and PAS.

"If you see from his (Lokman's) messages, he tried to link this event with another event on May 4, when it is totally unrelated.

"What upset the four princes, and of course the royal families, is the association between these two events. The way Lokman wrote it was as if the princes endorsed the rally, or were the organisers.

"We know they (protesters) are having the rally, and it is okay for them to take their own initiative, but it is not proper to put the messages in one WhatsApp message," said the source.

The source added that the event was organised by the princes, and had nothing to do with Lokman, who publicised it.

"It was supposed to be an interesting event hosted by the four princes where the people get to mingle with them. I don't know how it reached Lokman's ears," the source added.

Yesterday, Lokman circulated a poster which stated that the event in Malacca tomorrow would be attended by the crown princes of Johor, Selangor, Pahang and another 'mystery' prince.

He invited the public to turn out in force for the event, stating that they could take "selfies" with the princes.

'Teh tarik' session is princes' initiative, not Lokman's - source

Selangor crown prince not involved in 'teh tarik' event