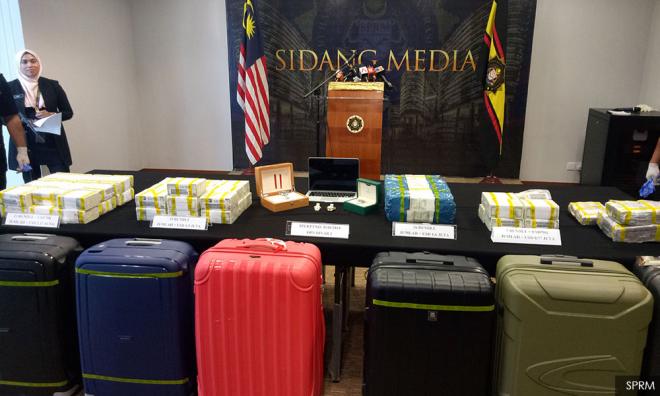 Putrajaya and the police have filed two civil forfeiture suits against former prime minister Najib Abdul Razak, his wife Rosmah Mansor and several others to seize a total of RM711 million worth of luxury items, including 27 luxury cars and a property from these individuals.

The Edge reported that two notices of motion and supporting affidavits were filed in the High Court in Kuala Lumpur yesterday to seize the items, purportedly bought with money from state investment fund 1MDB.

Quoting sources, it said that the action was a follow-up to the seizure of the valuables last year at Najib-linked properties in several areas, including Bukit Bintang.

The first notice of motion filed yesterday was to seize a property in the Klang Valley, cash (in various foreign currencies), jewellery, handbags, watches and sunglasses worth RM680 million.

The second notice of motion is to seize RM31 million worth of items, including 27 luxury cars, cash (in various foreign currencies), 29 bank accounts, watches and bags.

It is learnt that one Supt Foo Wei Min, who headed the police's Anti-Money Laundering Unit in the operations and investigations, affirmed an affidavit in support of the forfeiture action.

The unit was also assisted by the MACC.

The hearing of the application would take as long as a month, The Edge reported.

Yesterday, Attorney-General Tommy Thomas confirmed that Malaysia has received US$57 million (RM236 million) from the US, which was forfeited from Red Granite Pictures after it was accused of financing films using funds allegedly stolen from 1MDB.

In March, the then inspector-general of police, Mohamad Fuzi Harun, stressed that the investigations into the seized items must be completed on or before May 16.

This is because the police have only up to that date to hold onto the seized items. After that, Fuzi said, the police would have to go through certain processes, including recommendations from the court before proceeding with the investigations.

On June 27 last year, former Bukit Aman CCID director Amar Singh reportedly said the total value of the items seized in connection with the 1MDB case was between RM900 million and RM1.1 billion.