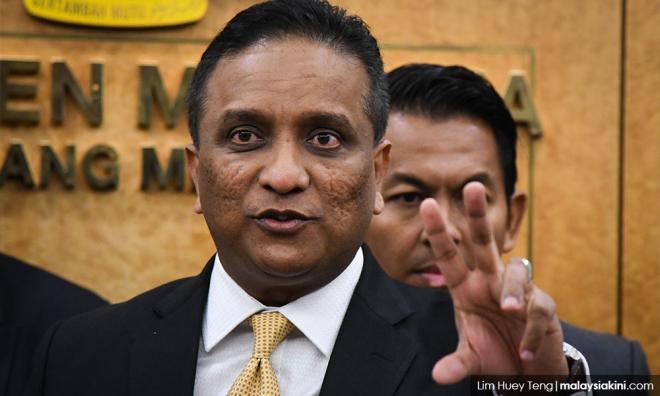 Attorney-General Tommy Thomas' participation in a forum on the Rome Statute, when the matter had already been rejected by the Malay rulers, is rude and borders on treason, claimed an Umno MP today.

In a statement, Kepala Batas MP Reezal Merican Naina Merican asked Thomas to resign from his position over the episode.

"I am of the opinion that the attorney-general is very rude, full of tricks and bordering on treason.

"The Yang di-Pertuan Agong has decreed, and the Conference of Rulers has decided. Who is the attorney-general to revive the issue (Rome Statute)?" the Umno supreme council member asked.

Last month, Thomas spoke at a forum organised by student activists in Universiti Malaya’s law faculty on the matter, together with constitutional expert Shad Saleem Faruqi.

Thomas has dismissed claims that he was participating in the forum because he had failed to convince the Conference of Rulers on the Rome Statute, to whom he had presented a working paper on the treaty.

Police later confirmed that an investigation under the Sedition Act 1948 had been opened into the forum.

Johor Crown Prince Tunku Ismail Sultan Ibrahim was one of the vocal opponents of the Rome Statute, arguing that it would threaten the position of the Yang di-Pertuan Agong.

A bigger agenda at play?

Reezal further claimed that there is a bigger agenda at play behind Putrajaya's perceived eagerness to ratify the Rome Statute.

"It is clear that the attorney-general, who has gone against the stance of the King and the Conference of Rulers, is no longer qualified to hold the position.

"Step down if you can't be loyal to the royals and the Federal Constitution," he said.

According to Reezal, the government is seen to be continuously trying to influence public perception on the acceptance of the Rome Statute.

"The presence of the attorney-general, the important character in the ratification of the statute, in several forums, gives the impression that efforts to recognise the Rome Statute will be reconsidered by the government," he said, further urging the cabinet to immediately put a stop to such efforts.

Rome Statute
Tommy Thomas
Umno
Related Reports
Cops investigating Ummah rally to 'defend Islam'
a year ago
How do ministers, BN shadows rate their performance?
a year ago
Human rights group: Royals should stay out of gov’t policies
a year ago
Malaysia informs UN on withdrawal from Rome Statute
a year ago