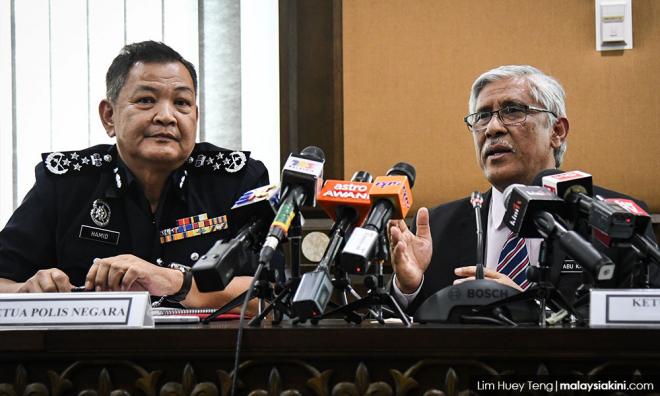 Cops agree to IPCMC and 10 things that happened yesterday

1. There is some progress in the setting up of the Independent Police Complaints and Misconduct Commission (IPCMC) following a meeting between the police top brass and the Governance, Integrity and Anti-Corruption Centre (GIACC), a newly formed agency under the Prime Minister’s Department headed by former MACC chief Abu Kassim Mohamed.

However, there will still be more meetings between the two bodies before further steps can be taken.

2. Prime Minister Dr Mahathir Mohamad had expressed regret that social activist Firdaus Abdillah Hamzah, popularly known by his online persona Pipiyapong, was arrested by the police over a tweet purportedly aimed at the royals.

Mahathir said Malaysians are free to criticise leaders as long as it does not involve threats, slander and insults against the rulers.

3. Incidentally, Firdaus was released by the police a few hours after Mahathir's message. Firdaus had purportedly posted material on Twitter that was aimed at Johor Crown Prince Tunku Ismail Sultan Ibrahim.

4. The Selangor palace has suspended all titles bestowed on Najib Abdul Razak and his wife Rosmah Mansor pending the conclusion of their criminal trials.

5. Rosmah filed a legal challenge to prevent the authorities from applying the Anti-Money Laundering Act (Amla) to compel her to divulge information about her possessions that were confiscated by the police.

7. PAS secretary-general Takiyuddin Hassan has questioned whether the people wanted a "convict" in the form of PKR president Anwar Ibrahim as a future prime minister.

8. PAS' Zaharudin Muhammad, a figure who has been linked to the infamous recording featuring the party’s central committee member Nik Abduh Nik Aziz talking about receiving money from Umno, has lashed out against a group he dubs the "dedak cartel".

9. The Sandakan by-election will take place today. Do follow our live coverage of the results from 6pm onwards. Read our roundup of what happened during the campaign.

10. Najib boarded the same plane as three cabinet ministers to Sabah for the Sandakan by-election campaign.

11. Bersih has criticised Warisan over its leaders hitching a ride on police boats during the Sandakan by-election campaign.