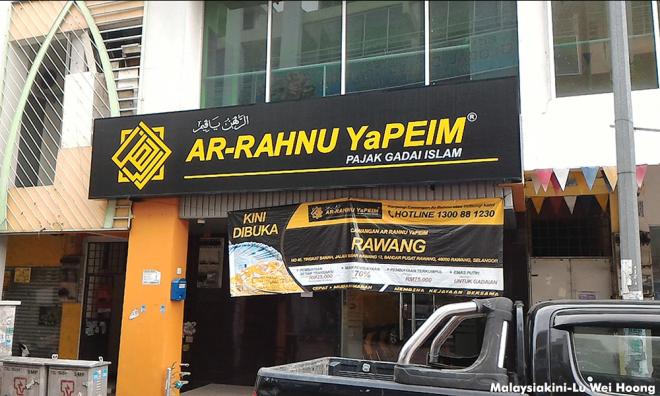 The Islamic Economic Development Foundation (Yapeim) is believed to have lost RM12 million through a gold pawn scheme involving 1,000 Ar-Rahnu customers, which allegedly went wrong due to incompetence.

Citing a confidential government document related to the foundation's expenses, The Malaysian Insight reported today that Yapeim failed to sell or auction off 300kg of unclaimed jewellery worth RM80 million.

The document states that Yapeim tried to cover this up by forcing its subsidiary to buy the jewellery, pawned between 2012 and 2014, through dozens of Ar-Rahnu outlets under its management nationwide.

"Yapeim's management department forced Ar-Rahnu’s management to sell all 300kg of the gold to Input Yapeim, a subsidiary company wholly owned by the foundation, to cover up the matter.

"Until today, Input Yapeim has yet to settle the payment for the gold.

"Following its failure to sell and auction off the jewellery, Ar-Rahnu lost RM12 million in the value of gold," read the document.

Malaysiakini is unable to independently verify the authenticity of the report. Yapeim has been contacted for comment.

According to TMI, a successful auction would have prevented such losses, as the price of gold never dropped more than 20 percent in the 20-month period.

The document also explains how Yapeim delayed the sale of the jewellery to wait for the price of gold to go up, but at the same time, liquefied the gold without owners’ consent.

Wan Zahidi Wan Teh, the chairperson of Yapeim's syariah committee, was reportedly sacked after he objected to the move. No investigation was conducted on the matter due to alleged "interference" from the foundation's management.

The document, TMI reported, also highlighted a further six issues – including money allegedly diverted to pay high bonuses to Yapeim's top management, and the RM1 million payment of legal fees for a lawyer who served as an aide to former prime minister Najib Abdul Razak.

Najib had earlier responded to his name being used in reports on the payment to the lawyer, calling it "evil propaganda" aimed at tarnishing his image on the polling day of the Sandakan by-election.

Yesterday, Yapeim legal and regulatory department chief Adawiyah Abdul Samad refuted the RM1 million figure, and clarified that no funds set aside for orphans in its charity (amal jariah) fund were used to settle the legal fees.

Instead, Adawiyah said, the legal fees were paid through funds from Yapeim's general (am) fund, and were approved by the board of trustees.

Allegations of Yapeim's alleged financial misappropriation were first revealed in 2015 by Akmal Nasir (photo), as the director of the National Oversight and Whistleblowers (NOW) centre.

Akmal had alleged that then-minister in the Prime Minister's Department Jamil Khir Baharom had gone golfing and shopping with funds from Pemangkin – a foundation for the advancement of orphans and the poor – set up under Yapeim.

Jamil later filed a suit against Akmal over the allegation, but it was struck out by the High Court.

Following the latest round of allegations against Yapeim, Akmal – now the PKR Youth chief – said yesterday that he is prepared to disclose the identity of the whistleblower who revealed the alleged mismanagement of Yapeim funds, so long as that individual is given due protection.