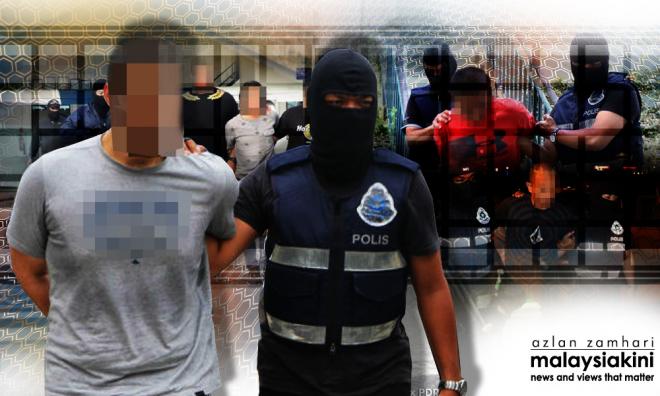 Yoursay: Thanks PDRM, we can't afford to import terrorists

YOURSAY | 'The insidious home-grown IS franchise terrorism must also be stopped.'

David Dass: It is good that the police stopped these terrorists. We cannot allow a Sri Lankan-type tragedy.

We have so many refugees and foreign workers in the country. Both legal and illegal. Our intelligence services must be overstretched. They must be given more resources, more training. Bring in experts from other nations.

Our places of worship and hotels and holiday resorts are vulnerable targets. Not all persons with bags or rucksacks are stopped and checked.

Vijay47: Obviously, the first response required here is to congratulate and thank the police for removing a grave danger from our landscape.

We hope that this heralds the arrival of a new breed of dedicated police officers motivated by effectiveness and integrity; we know that under the previous regime, the police were more concerned with serving political masters and not acting “contrary to my syariah principles”. So indeed, well done, Inspector-General of Police (IGP) Abdul Hamid Bador.

The terrorist cell involved may seem minor in the perspective of what violent religious fanatics can wreak, but almost every aspect of their objectives warns of much more potentially devastating consequences.

That it wanted to avenge the death of a firefighter is certainly unbelievable, but worse, it merely reflects how effective the rhetoric from Malay extremists, including from Pakatan Harapan, was in influencing primitive minds.

The management of the Seafield temple attack was a scandal ab initio. There was, and is, this distinct suspicion that the police were not too enthusiastic once it was established that the culprits were not the Hindus defending their place of worship but the Malay gangsters who attacked it.

What of the politicians from Umno, PAS, and even Bersatu, who painted every issue in red roaring racial and religious colours?

Mohamad Adib Mohd Kassim, the International Convention on the Elimination of All Forms of Racial Discrimination (Icerd), the Rome Statute of the International Criminal Court (ICC), everything was a challenge to their delicate status; non-Malays now had the audacity to even protest at being ‘tersinggung’ (offended).

There was nothing to detract Malay fanatics from taking to the streets and rallying to defend race, religion, and royalty - all their actions seemed to receive the stamp of approval, lest the Malays be spooked and not assuaged.

Malaysia will surely refuse to learn from the lessons heaped on Germany, France, and England where the immigrants are ungrateful ticking time-bombs waiting to be let loose on the heathen host country.

Thus, we have here some Rohingyas masquerading as victims while they plot to kill, maim and destroy during moments when they are not begging in the streets.

Your work is cut out for you, Abdul Hamid Bador. Yes, apprehend the danger cells but go also for those who are, as minister Mujahid Yusof Rawa would term them, inspirations.

Abasir: "Thus we have here some Rohingyas masquerading as victims while they plot to kill, maim and destroy during moments when they are not begging in the streets."

There is more truth in this line than anything said thus far by those paid to secure our borders and maintain public order.

The Indians who first offered succour to those streaming in from Bangladesh have long said the same - that infiltration by the purveyors of "Islamic" terror is not just possible but is a daily occurrence.

They have now clamped down only because there is no way in hell to ascertain which one among the pathetic, unwashed lot is a primed killer.

But securing the borders in Malaysia is next to impossible for two reasons: 1. The rampant, routine corruption among those Muslims paid to secure the borders (Wang Kelian); and 2. The fact that the Rohingya, like the guards, are also Muslims appealing for "brotherly consideration".

Will the new IGP be able to stem the tide? Not likely because this, like nearly everything else in Malaysia, is integral to Malay-Muslim politics funded, as always, by Salafi-Wahhabi benefactors like that money-laundering fugitive who fears no one but Allah (and the Indian police).

Newday: One Malaysian and two imports - one a refugee and the other a factory worker. I wonder if they have the documents to attest that they are legally allowed to be here.

A potential ongoing big problem with the millions of immigrant workers, mainly from Muslim countries and refugees, is getting admitted without proper screening.

The reason for the attack? Firefighter Adib. Much thanks (not) goes to the far-right of Umno, its affiliated NGOs and PAS for turning Adib into a martyr, no matter what the evidence points to, and we haven't even finished the inquest yet.

Anonymous 9916: So we have a Rohingya who is plotting to blow up minorities’ places of worship. Malaysia is welcoming these “terrorists” with open arms.

Not only that, Malaysia is also welcoming back Malaysians who went to Syria to fight alongside Islamic State (IS). Leave them to die there since it’s their choice to go. Why import terrorism?

Or is it because they are Muslims, that’s why Malaysia will accept them back? What if they were the minorities? Will Malaysia even consider bringing them back?

What have the minorities done to deserve this kind of treatment? It seems that Muslims in Malaysia are getting more intolerant by the day. The authorities better take heed of the situation.

Fateh: When the government allows some quarters (Umno and PAS) to spread racism and preach fanatic teachings to the naive believers, the country will move towards destruction.

These extremists may seem small and irrelevant now, but the multiplier effect is very damaging. If the current political scenario of this country is not carefully dealt with, it will break up this country.

OceanMaster: Those politicians from Umno and PAS who spew racist bigotry are the root cause and are the ones who are responsible for the rise of such extremism.

Accepting Muslim preacher Zakir Naik to remain in Malaysia and taking a soft approach towards blatant racist-bigotry narratives by certain individuals is subtle posturing of Harapan that promoting terrorism and putting down other religions and race is acceptable in Malaysia.

On the issue of Rohingya, a much tougher security vetting should be imposed on that group to prevent infiltration of terrorists into the country. Get tougher right away, Harapan. There should be no compromise in our national security.

AnotherKomentar: This insidious local home-grown IS franchise terrorism must be stopped.

Leveraging fragile communal relations and exploiting the current Malay-Muslim under-siege narrative propagated by mainstream politics (you know who), the country can so easily plunge into communal and political unrest.