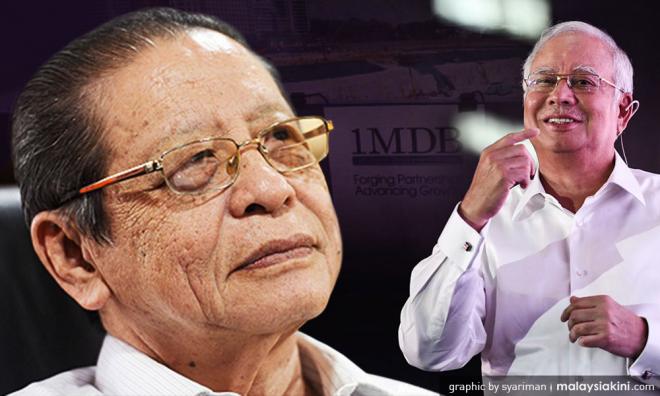 YOURSAY | 'If examples are raised in this ill-conceived debate, won't that be contempt of court?'

Behsaikong: How is it even possible that former prime minister Najib Abdul Razak challenged DAP adviser Lim Kit Siang to a “freestyle” debate?

Najib is on trial facing multiple criminal charges on the very debate topic – "How Malaysia became a global kleptocracy."

If examples are raised in this ill-conceived public debate, won't that be contempt of court? What is Lim thinking? Let the court trials expose this man, not a public debate.

Rance: Lim, please don't have this debate. We should not give Najib face, he is irrelevant.

Furthermore, Najib's trial in relation to SRC International Sdn Bhd is going on. We don't want to put the case in jeopardy.

Najib has nothing to lose. The 'bossku' will lie all the way and his ardent followers will believe him.

FairMind: Yes, debating with a kleptocrat serves no purpose, since he is already charged with many offences in court.

While his case is ongoing, he can certainly use the debate and the public comments to his advantage.

Moreover, this debate platform will only give publicity to him and allow him to further cause disunity among Malaysians by rolling out the 3R (race, religion, royalty) card. It's a trap.

FellowMalaysia: There has been such a tremendous amount of revelations and developments the past year, especially over the last six months, that tells us that Najib is toxic.

The damage that he has inflicted on the country as a result of his utter excess has caused an untold amount of suffering, especially among the poor Felda settlers, retired government servants, ex-armed forces personnel and pilgrims performing the haj.

Najib is also facing a gamut of criminal court charges, and any attempt to relate to his 42 charges in the debate may be cited as a contempt of court.

He has also shown his repulsive behaviour when he was interviewed by Al Jazeera's Mary Ann Jolley barely six months ago.

After the botched interview, Najib is craving for publicity and attention. With the atrocities that he has been implicated in or allowed to foster while he was the prime minister, Lim should just brush off Najib's request for a debate.

Oceanmaster: Don't engage Najib, stay away from him like a plague.

What Najib and his lackeys don't realise is the extent of hardship and humiliation every Malaysian is living through due to the disgusting things he did to the country while he was the prime minister.

Those who lived through the 1970s, 1980s and 1990s will remember how Malaysia was among the 'Asian tigers' and one of the most respected developing countries in the world.

Today, Malaysia is known for the biggest kleptocracy scandal the world has ever seen. There is this unbearable stench on and around Najib.

In many countries, people like him would have seen the end quickly, but we modest Malaysians are still hoping for the best, so we will let due process to take place.

Lim shouldn't have to stoop so low to face off against this man. In his desperation, Najib is using this opportunity to fan racist sentiments against you and DAP and divert attention away from the real issue. Let the courts decide.

RightsaidFred: Lim, take Najib up on the offer. Let's have some fun for what it is worth. Knowing Najib, it's very likely he will not have the 'cojones' to show up. This 'Bugis warrior' is all talk and no action.

Just name the time and place, and get Communications and Multimedia Minister Gobind Singh Deo to telecast this live. Maybe even invite CNN and other international media outlets for extra coverage.

Anonymous_ 1536078333: What about a debate on the future of the country, which is going sideways instead of forward? Let MACC, the police and courts worry about past deeds.

Lim, please focus on the future of the young, and what will you bequeath to your great grandchildren?

Anonymous 6939cb47: Indeed, there is no point debating Najib now, he is no longer the prime minister.

If anything bad or not in his favour, or he doesn't know or doesn't like is raised in the debate, he will just walk away. Like he did in the Al Jazeera interview.

Frank: Frankly, Lim, the only debate that Najib should have is with himself. Why? He seems to have multiple personalities. So many, I believe he himself does not know how many there are.

Just play him out on this debate talk. Don't take him seriously – being taken seriously is all that he wants right now.

He is no longer relevant to Malaysia, save for what will happen to him and his gang of thieves, and whether we can recover the billions that they're still holding on to.