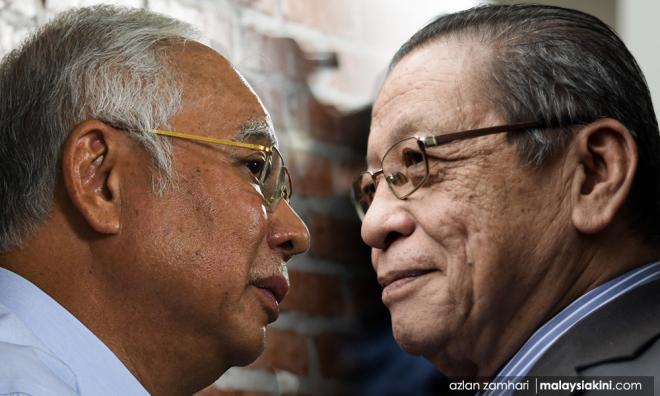 Najib Abdul Razak launched another salvo against Lim Kit Siang for pulling out of a planned debate between the two political rivals.

The former premier also dismissed the DAP veteran's claim that the verbal jousting match could be used to stir up racial sentiments and labelled the latter as a “serial liar”.

“This is a debate, not a wrestling match. Why run?

“[...] Why is DAP playing up racial issues? Is this an admission by Kit Siang that DAP is a Chinese party?

“This is a debate between two parliamentarians. Nothing to do with race,” he posted on Facebook.

Najib said he had intended to pose numerous questions regarding the Pakatan Harapan government and 1MDB during the debate.

He said Lim should just admit he was afraid he could not answer such “facts” and that the debate would reveal the DAP leader and the Harapan government to be liars.

Among the topics Najib claimed he had intended to broach included the RM2.6 billion in his personal account, currently a subject of his ongoing criminal court cases; the repayment settlement between 1MDB and Abu Dhabi’s International Petroleum Investment Corporation (IPIC); as well as the East Coast Rail Link (ECRL) project costing.

On a more personal note, Najib said he also wanted to question Lim regarding the Attorney-General Chambers' decision to drop a corruption case against the latter's son, Guan Eng.

“I wished to ask Kit Siang so much more. And I will wait for Kit Siang to answer. But he has run away. Even so, I will not declare Kit Siang a coward.

“I will only call him a serial liar and a dishonest person.

“One more thing. Kit Siang no longer has the right to issue any statements attacking me,” he added.

The saga began earlier this week when Najib challenged Lim to a public debate after Hari Raya Aidilfitri as the former claimed he was frequently on the receiving end of the DAP leader's press statements.

Lim accepted on the condition that the debate would be on the topic "How Malaysia became a global kleptocracy", to which Najib agreed.

However, less than 48 hours later, Lim withdrew from the debate, saying he was inundated with feedback from various quarters advising him against it.

Among the reasons given was that Najib would use the platform to stir up Chinese-Malay racial sentiments, particularly against DAP.

"I know my decision will be greeted with a tempest of allegations that I am a coward.

"My 53 years in politics is an open book for Malaysians to judge whether I am a coward or not, and I am always prepared to subject myself to the judgment of Malaysians.

"However, there is one thing I will not compromise – the higher interests of the nation and Malaysians," said Lim after announcing his withdrawal.

Critics, too, had panned the debate, deeming it a waste of time and that Lim and the government should focus on more pressing matters.

They further warned that it would play into Najib’s hands in controlling the narrative surrounding accusations against him, and could even be sub judice in view of his ongoing criminal cases.