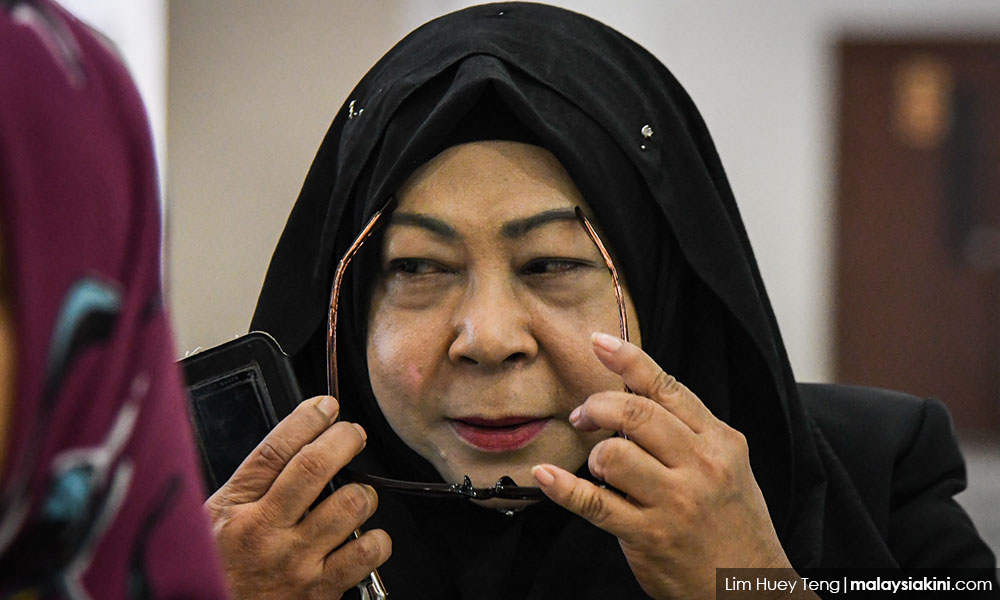 Lawyer Shahrudin Ali has questioned the arrest warrant issued against his client and former spy chief Hasanah Abdul Hamid for failing to turn up at a case management before the Kuala Lumpur High Court.

Shahrudin argued that the law requires the attendance of an accused during a trial but a case management is a pre-trial process.

"How can an arrest warrant be issued to force the attendance of an accused person at a case management, for example, to fix a date?

"Why do you need to see the accused in court for this three-minute exercise between deputy public prosecutor and counsel?

"Further, why the need to seek an arrest when the accused has lawfully posted bail? The court would allow bail only if the court was sure the accused would not abscond or disappear at the trial proper," he said in a statement today.

Hasanah, who is formerly the Malaysia External Intelligence Organisation director-general, had failed to turn up in court yesterday and was subsequently issued an arrest warrant.

Azam Aziz Shaharudinali & Co, which is representing Hasanah, said its client had forgotten the case management date and that the law firm had also had forgotten to remind her.

Shahrudin stressed that case management is not a trial.

"Case management is not a trial. The central figures in a case management are the counsel and deputy public prosecutor. Not the accused.

"In fact, in the case of Hasanah, a trial date has been fixed on Feb 3 next year. Further, Hasanah has never failed to turn up in court for anything before, case management or not.

"Why the need to arrest her for this few-minutes-case-management?."

Shahrudin said the Criminal Procedure Code has its early history from India and the compelling of an accused is dealt with in the law.

However, he said an amendment which came into effect in 2012 introduced the concept of case management.

"A new chapter - XXVIIIA - was inserted into the Criminal Procedure Code. This is the plank of our arguments.

"The controversy surrounding Hasanah’s absence in court yesterday was all about this new chapter on 'Pre-trial Process'.

"Even the title proves that a trial has not started at this stage, that is, a process before a trial begins.

"For the first time ever, terms that have not been expressly used by the Criminal Procedure Code before appear in this new amendment. It is interesting to see the departure from the old ways," he said.

Hasanah is facing charges of criminal breach of trust involving RM50.4 million belonging to the government.

She allegedly committed the offence at the office of the director-general of the Research Division, Prime Minister’s Department, Putrajaya, between April 30 and May 9, 2018.

The charge, which was made against her in October last year under Section 409 of the Penal Code, carries a maximum penalty of 20 years’ imprisonment, whipping and fine, upon conviction.