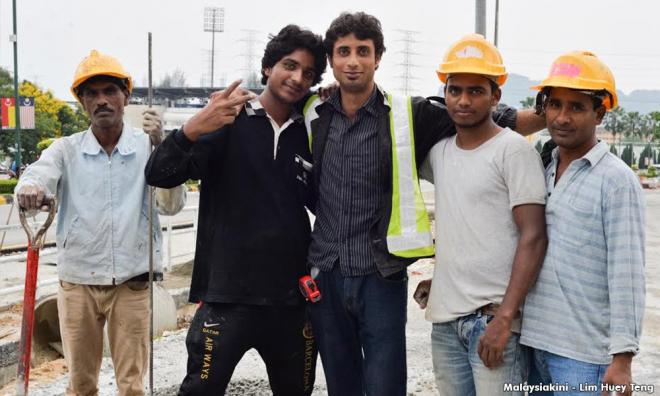 Yoursay: Another 50,000? Time to kick our foreign worker addiction

MAICCI wants PM to intervene in lack of foreign workers

Anonymous 770241447347646: The government should seriously review the shortage of foreign workers as pointed out by Malaysian Associated Indian Chambers of Commerce and Industry (MAICCI).

If there is a shortage, then avenues should be opened quickly to find a solution fast.

Together with this, the government should also review the working conditions of foreign workers. The normal issues are the long working hours; some even work seven days a week.

What about the living conditions? Are they cramped into a room or a house to save cost? Are their salaries deducted if they do not turn up for work due to illness?

Let us, in enriching ourselves, not turn into monsters. Let our humanity show. Let us make their stay here comfortable as they have to sacrifice family life and pay huge fees to unscrupulous agencies to reach our shores.

Let us not add to their miseries.

Anonymous 122233: Enough is enough, Malaysia has too many foreign workers.

Industry players must agree with the government to reduce a certain percentage of foreign labour every year so that our country will not be overwhelmed by migrant workers.

Rembrandt: There are 32,000 ex-prisoners looking for jobs and the Prison Department has asked the people to give them a second chance.

Give them jobs so they can stand on their own feet and start a new life. These Indian businesses should employ them.

After all, the workers they are looking for are not skilled workers, so train our own instead of foreigners. People should start employment agencies to match employers and ex-prisoners together.

Alternatively, use automation. The Indian restaurants are still using a lot of workers just to take orders, clean tables, wash and dry the plates, etc; same old, same old like 50 years ago.

There is no way the government should allow another 50,000 foreigners into the country. This has to stop. Use our ex-prisoners and give them a second chance.

Toffeesturn: There is more than that number of illegals and refugees in this country who can be legalised for employment and given these jobs.

Instead of issuing permits for another 50,000 into the country, let's begin recruiting these first. If they refuse, send these illegals back to their countries of origin.

I am sure the refugees would love bona fide employment.

RKR: There are so many jobless Indians in the country. Why can't these entrepreneurs train them in their respective industries? Why must they rely on foreign workers?

Clearwater: Poor working conditions and lousy pay are not acceptable to the locals. Foreign workers are prepared to endure because conditions in their home country are worse.

The employers are exploiters of cheap human labour, but then consumers also benefit through lower prices made possible by such practices.

Change For The Better: Pakatan Harapan, if you continue with this importation of cheap labour, there are many consequences, the least of which are the moans of these so-called business people.

The socio-economic consequences are plain to see. We see diseases that had been eradicated, crime, a change in the demographic balance and culture of the nation - all in the quest for cheap labour.

Previously, corrupt officials who milked the system to make money via permits, processing, etc, were keen to have this gravy train.

If we persist in keeping wages low in the false belief that it keeps us competitive, our quest to be a developed nation will be pushed back even further. Surely the impact is already plainly obvious.

Grrrrrrrrrrrrr 2019: Yes, this (the barring of civil servants from holding political posts) is a good idea as they should not be partisan.

Remember how much damage Jasa (Special Affairs Department) did although it was a government agency and not an Umno agency.

Also, reduce the number of civil servants holding board positions when they lack experience in corporate and business matters.

The government should appoint capable people to represent them at government-linked companies (GLC), not civil servants merely by virtue of them being in the government.

Anonymous_cbd4fb5d: Civil servants should be barred from joining as directors or forming any companies for 10 years from the date they retire from the government.

Many top civil servants, for example, the KSU (ketua setiausaha or chief secretary) or pengarah (director) in a department or ministry, when he or she is about to retire, starts colluding with private companies to join them as directors or chairpersons after retirement.

Either they start dishing out contracts, approvals, permits to these companies before they retire, or on retirement, walk into government departments to get contracts and favours for these companies. It's shameful.

Headhunter: Civil servants should be seen to act as professionals. Once they join a political party, it is likely that they will be partisan in many of their decisions.

Don't bring politics into the civil service. We have seen how damaging it can be. If civil servants want to be in politics, do the right thing by resigning.

Wong Choong Meng: There is no need to think very hard on this matter. Of course, civil servants must be barred from holding political party posts.

Anonymous_3925G: Yes, stop them. Also, ministers and politicians should not interfere with public servants doing their jobs. Then they can work without fear or favour.

yoursay
foreignworkers
migrantlabour
maicci
Related Reports
M'sia, Bangladesh must strictly regulate worker recruitment process
a year ago
MAICCI wants PM to intervene in lack of foreign workers
a year ago
Gov't looking to attract more foreign investments to boost economy
a year ago
Yoursay: Thanks PDRM, we can't afford to import terrorists
a year ago