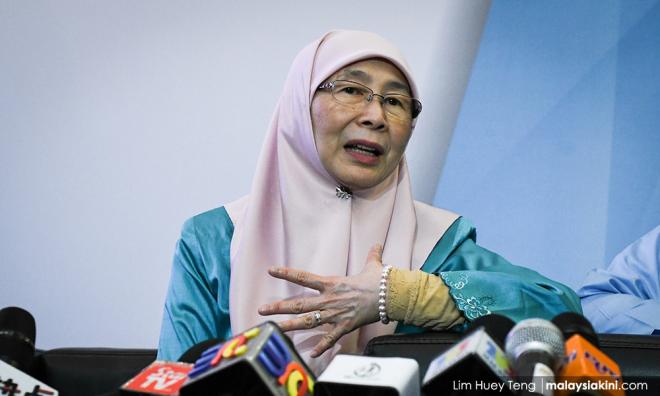 Deputy Prime Minister Dr Wan Azizah Wan Ismail has vowed stern actions against the culprits if the deaths of 14 Orang Asli in Kuala Koh in Gua Musang were indeed caused by contamination of their water source.

"Allegations that the deaths were due to contamination of a pond the Orang Asli depended on as their water source will be investigated thoroughly.

"The authorities will look into mining and logging activities in the vicinity to see if all proper procedures in relation to the environment had been adhered to.

"The government will take stern action against the culprits if found the deaths were caused by contamination of the Orang Asli water source," she said in a statement today.

Wan Azizah, who is also the women, family and community development minister, said the government will also review environment policies in relation to logging and mining activities.

"Stricter enforcement and more deterrent measures are some of the steps that must be looked into.

"My prayers are with the families of those who perished and those who are currently undergoing treatment," she said.

NGOs, including Peka Malaysia, have put the death toll at 14.

However, local police and the Kelantan Health Department said it can only confirm two deaths.

The Kelantan Health Department said they had died from pneumonia.

It added, in a statement, that 29 others who are ill have also been given medical treatment.

It said clinical test found infection in their respiratory tract but the exact infection has not yet been identified pending lab results.

Minister in the Prime Minister P Waythamoorty, who today visited the site, confirmed through his aide that 14 deaths had taken place in the last month.

He explained the confusion over the death numbers was because the post-mortem for 12 others has not been conducted.

He also urged the PAS-led state government to cooperate on the matter.

"I hope all quarters including the state government will cooperate to determine the actual cause for so many deaths in a short time without any cover-up.

"An independent forensic committee should be formed to study all aspects and possibilities," he said.