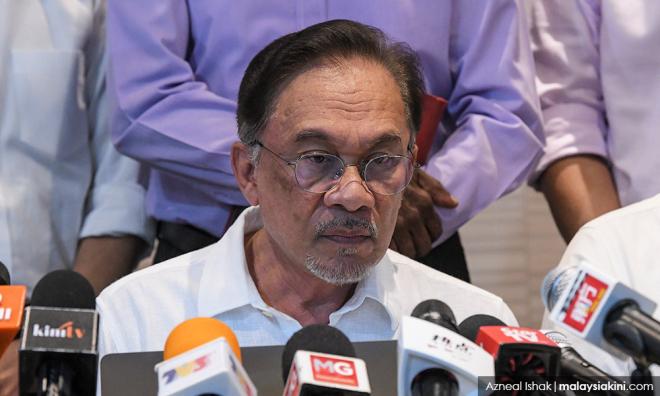 PKR president Anwar Ibrahim has denied his and his supporters' involvement in the dissemination of a series of sex videos implicating his deputy Mohamed Azmin Ali.

As Anwar told reporters last night, there is no reason for them do so, as they are all from the same party.

"What would be the reason for us to do this? We are from the same party and from Pakatan Harapan," he said after attending a Hari Raya Aidilfitri open house at his constituency of Port Dickson.

"There's already (an attempt) to slander (Azmin) and this cannot be justified by more slander."

Soon after Santubong PKR Youth chief Haziq Abdullah Abdul Aziz confessed to being one of the men shown in the videos, speculation was rife on the involvement of Anwar and his supporters.

Azmin has since characterised the scandal as a "nefarious plot" to destroy his political career.

'All in Harapan back me'

At last night's event, Anwar also brushed off allegations of a power struggle between himself and his deputy, and that this has caused a rupture within Harapan.

"All parties have given their support to me," he said.

Both police and the Communication and Multimedia Commission are probing the sex videos, which were first released to the media and other PKR leaders on June 12.

Haziq is being investigated under four laws, including Section 377B of the Penal Code for "carnal intercourse against the order of nature," and Section 292 for distribution of obscene materials.

He was released from police custody on bail yesterday.

"I don't agree with their views. This is (an internal) matter between the premier and Harapan," he said. "Others can give their views, but I don't agree."

He also disagreed that Azmin should take leave from his posts pending investigation into the sex video.

Otai Reformis had demanded that Putrajaya ask Azmin to go on leave in the wake of the scandal.