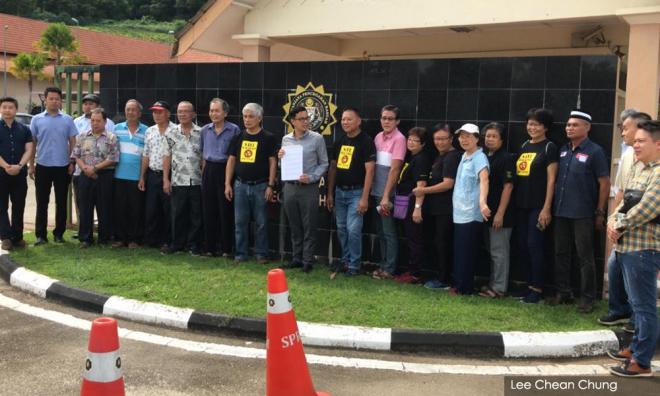 Semambu assemblyperson Lee Chean Chung has lodged a report with the MACC against the Department of Environment (DOE) for allowing Lynas to accumulate its Neutralisation Underflow Residue (NUF) waste beyond statutory limits at its Gebeng facility in Pahang.

While Lee acknowledged Lynas' defence that its storage of the scheduled waste beyond the stipulated 20 metric tonnes received the DOE director-general's approval, in accordance with Regulation 9(6) of the Environmental Quality (Scheduled Wastes) Regulations 2005, he said the same regulation does not provide the director-general with power to extend the storage time beyond 180 days.

"It is clear that the NUF waste accumulating at the Lynas Advance Material Plant (Lamp) has exceeded the time limit by several times, at more than five years.

"Therefore, in our opinion, the (continued) storage of the NUF at Lynas' factory is an offence," Lee said in his statement to the MACC.

The report was lodged at the Pahang MACC headquarters in Kuantan.

Furthermore, Lee said it was unreasonable for the DOE director-general to grant approval for storage of up to 55,000 times of the 20 metric tonnes limit.

According to a ministerial report in December 2018 last year, the accumulated NUF waste at Lynas' Gebeng facility stood at 1.113 million metric tonnes while its radioactive Water Leech Purification (WLP) waste stood at 451,564 tonnes.

"In our opinion, allowing the storage of 1.113 million metric tonnes (of NUF), which is 55,000 times more (than the limit), is inappropriate and clearly oversteps the powers granted to the director-general," he said.

Lynas had stressed that it is in compliance with all government requirements with regard to its waste management.

"As a scheduled waste under Malaysian regulations, it (NUF) is regulated by the DOE.

"The DOE has periodically consented to the storage of NUF on-site, while allowing Lynas to pursue research and development on the reuse of NUF," Lynas Malaysia managing director Mashal Ahmad had said.