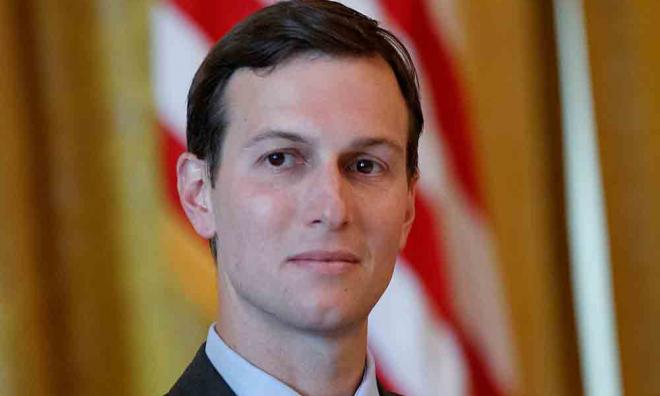 The Trump administration prepared to launch its US$50 billion (RM207 billion) economic formula for Israeli-Palestinian peace in Bahrain on Tuesday but the Palestinian leadership reiterated its disdain for the plan and Saudi Arabia, envisaged as one of its main bank-rollers, also indicated some reservations.

The two-day international meeting, led by Trump's son-in-law and senior advisor Jared Kushner (photo, above), has been billed as the first part of Washington's broader political blueprint to resolve the Israeli-Palestinian conflict.

But the political details of the plan, which has been almost two years in the making, remain a secret. And neither the Israeli nor Palestinian governments will attend the curtain-raising event in Manama.

Palestinian President Mahmoud Abbas, whose Palestinian Authority exercises limited self-rule in the Israeli-occupied West Bank, was scathing about its prospects of success.

In Gaza and the West Bank, Palestinians protested against the plan and burned portraits of US President Donald Trump.

Washington will be hoping that attendees in Manama such as wealthy Gulf Arab states will show a concrete interest in the plan, which expects donor nations and investors to contribute US$50 billion to Palestinian territories, Jordan, Egypt and Lebanon.

Saudi Arabia - a close US ally which shares a common foe with Israel in Iran - on Tuesday voiced support for "international efforts aimed at improving prosperity, investment and economic growth in the region".

But Riyadh reiterated that any peace deal should be based on the Saudi-led Arab peace initiative that has been the Arab consensus on the necessary elements for a deal since 2002.

That calls for a Palestinian state drawn along borders which predate Israel's capture of territory in the 1967 Middle East war, as well as a capital in East Jerusalem and refugees' right of return - points rejected by Israel.

Kushner said on Monday the plan would not adhere to the Arab initiative.

"It will be somewhere between the Arab Peace Initiative and between the Israeli position," Kushner told Al Jazeera TV in an interview to air on Tuesday.

Israeli Prime Minister Benjamin Netanyahu, a close Trump ally who is facing an election, said Israel was open to the plan. "We'll hear the American proposition, hear it fairly and with openness," he said on Sunday.

Expectations for success are low. The Trump team concedes the economic plan - billed "Peace to Prosperity" - will be implemented only if a political solution to one of the world’s most intractable conflicts is reached.

The highest ranking Arab official at the Manama conference appears to be Saudi Arabia's finance minister and there seemed to be meagre representation from European countries.

It is not clear whether the Trump team plans to abandon the "two-state solution," which involves the creation of an independent Palestinian state living side-by-side with Israel.

The United Nations and most nations back the two-state solution and it has underpinned every peace plan for decades.

But Trump's team has consistently refused to commit to it, keeping the political stage of the plan a secret.

Any such solution would have to settle long-standing issues such as the status of Jerusalem, mutually agreed borders, satisfying Israel's security concerns and Palestinian demands for statehood, and the fate of Israel's settlements and military presence in territory in Palestinians want to build that state.

In Gaza, businesses closed doors in a general strike called by the ruling Islamist Hamas group and other factions. Protesters burnt pictures of Trump, Kushner and Netanyahu and others criticised Arab states for attending.

"They are traitors. We decide our fate and no one else. We want money and we want projects, the situation is miserable but it doesn't mean that we should concede our rights."

The workshop is being held in Bahrain, home of the US Navy's Fifth Fleet, at a time of heightened tension between Tehran and Washington and its Gulf allies.

Although the event is supposed to focus on economics, Gulf Arab states hope it will also be used to show their solidarity with the Trump administration over its hard line against Iran, a senior Gulf diplomat said.

Trump on Monday imposed sanctions on Iran's supreme leader and other officials after Iran downed a US drone last week.

Palestinian leaders have boycotted the conference, and are refusing to engage with the White House - accusing it of pro-Israel bias. Breaking with international convention, Trump in 2017 recognised disputed Jerusalem as Israel's capital - a move that infuriated the Palestinians and other Arabs.

Kushner said that even without the Israeli and Palestinian governments represented, the presence of Israeli business officials and journalists with their counterparts from the Arab world would be significant.

"The politicians will not bring us anywhere," said conference attendee Shlomi Fogel, an Israeli shipping, finance and real estate entrepreneur. "We, the business people, should be able to show them there might be another way."