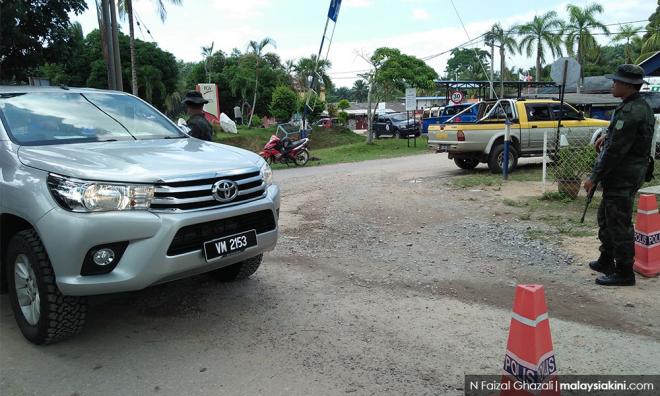 The Orang Asli settlement in Kuala Koh, Gua Musang, is still a red zone and members of the public are reminded against intruding into the area until the prohibition is withdrawn.

Kelantan police chief Hasanuddin Hassan said 30 members of the 8th Battalion of the General Operations Force (8GOF) are stationed there to carry out their duty.

He said until now, the Health Ministry had yet to decide whether to end the prohibition or otherwise.

"We (the police) are just waiting for instructions from parties with the expertise, and the police are merely implementing the instructions as stated in Regulation 20 of the National Security Council.

"It is hoped that members of the public using the route will be patient because based on the health angle, the regulation is still necessary,” Hasanuddin told reporters after the monthly assembly at the Kelantan Contingent Police headquarters in Kota Bharu today.

He said a member of the 8GOF, who had been infected with measles, was now recovering.

He is still being treated at the Gua Musang Hospital, but he is expected to be discharged from the hospital soon.

On another development, Hasanuddin said the crime index in Kelantan showed a drop of 18 percent between January until June this year.

He said that in the corresponding period of 2018, there were 2,098 criminal cases recorded, compared with 1,720 cases up to June this year, which was a reduction of 378 cases or 18 percent.

"The success was the outcome of close cooperation between the community and the police. We also increased operations in drug prevention because we are certain that most of the criminal cases that occurred were linked to drug abuse,” Hasanuddin added.