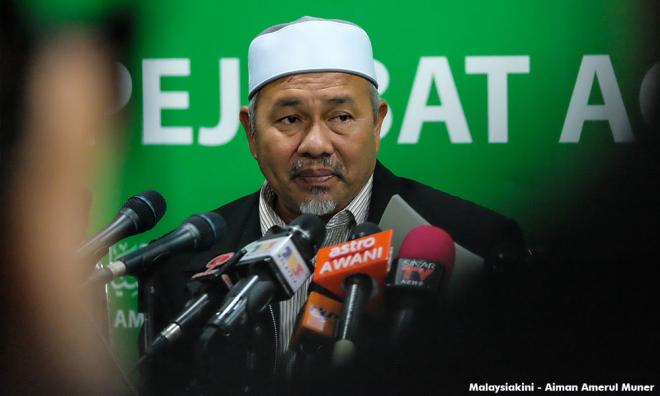 YOURSAY | ‘What to expect from a leader who before branded Umno as a party of infidels?’

Anonymous_1544340881: My goodness, "There is one hadith (collected sayings of the Prophet Muhammad): If God gives you wealth, do not display it, as there will be many who will scrutinise it", did I read it correctly?

My eyes must be playing tricks on me. This proves that the powers-that-be in the so-called Malay-Muslim elites are truly not good Muslims then.

Why all the big bungalows, high-end condominiums, luxury cars and extravagance accessories, i.e. Rolexes and Hermes bags, that I see so many flaunting from Kuala Lumpur to Kuching?

Now we know all the Umno-PAS elites despite "fighting and defending" Islam with million-man marches are actually not real Muslims all this time. They are just snake oil sellers using religion to get what they want.

My goodness, I hope they open a roti canai shop and sell roti kosong since that appears all that they are really good at that is productive - they are experts in flip flops!

Dont Just Talk: What to expect from a leader who before branded Umno as a party of infidels and those voting for Umno would go to hell?

Money can do wonders to a person's perception especially when it is from ‘Party Penipu’, and what was wang haram (sin money) in the past can become wang halal (legitimate money).

Anonymous 5237890145285379: Divine argument? More like a bunch of politicians hiding behind religious arguments to make it convenient for them to deflect blame or responsibilities.

Quo Vadis: These politicians are masters of the art of inventing and reinventing themselves.

Little wonder that they have remained in the wilderness all these years and undoubtedly will remain there for all time.

Being forgetful, both intentional or otherwise, is one of the most common and undesirable traits in our politicians.

Anonymous_3f49: PAS has it covered by invoking hadith and probably misinterpreting it to suit and cover up their potentially unsavoury practices.

Envy is engendered by humans, PAS members included, but not necessarily interpreted as virtuous and so should be discouraged rather than 'hidden away'. A perverse interpretation in any context.

Bad Feng Shui: Yes, this is another display of hypocrisy from the holier-than-thou types.

Occams Razor: I have suspected for some time that the Kelantan state government and PAS members use the money they receive for the purposes of spreading Islamic fundamentalism.

The reason why they are so scared of declaring their assets is because of the trails that might lead to Hamas or Muslim Brotherhood, maybe even Isis (Islamic State).

Not a big surprise there as several PAS members were filmed posing with Isis fighters. So how to get out of this situation? Taqiyya. A Muslim’s best defence against the infidels.


True Malaysian: They are politicians using religion for their own end. This is dangerous and should not be allowed as it can create national disharmony and disunity among races.

AJ: PAS’ Islam as everyone knows is a religion of convenience for them. They are allowed to manipulate and interpret it according to whatever they want.

This is precisely the point of the officials of this race in this religion who use it as a tool of convenience.

Thinking Aloud: Right-thinking people won’t get too excited over what Malaysian politicians say nowadays because often their pronouncements create a lot of humour but not substance.

In particular, those political leaders from right-wing PAS who, when it suits them, will bring in religion to defend their stand and Umno will use race for the same purpose.

It would seem that these PAS and Umno leaders are telling the world that their members and supporters are a bunch of idiots who happily swallow whatever their leaders say. In Malaysia, this may not be a surprise.

Ipohcrite: Tuan Ibrahim should be careful of using the name of the Almighty to suit his political agenda.

The rakyat already saw through his political shenanigans and retribution can come down very swiftly on him. Beware, my dear Tuan Ibrahim!

FlabberPro: Since when is PAS elected by God to represent His voice?

Did the God of PAS deputy president Tuan Ibrahim Tuan Man own a fickle mind that He changes His mind at His own whims and fancies and Tuan Ibrahim has what it takes to detect that change?

Or are all these just mortal limitations personified using God's name in vain?

I think the rakyat, elected by God to elect leaders, have spoken loudly and clearly; they do want to see their leaders declaring their assets to vindicate their corrupted reputation.

Apache: It shows the level of intelligence the PAS top leadership has.

Moving forward, we are not going to declare our annual incomes to Inland Revenue Board (IRB) as we don't want to show off our wealth, too.