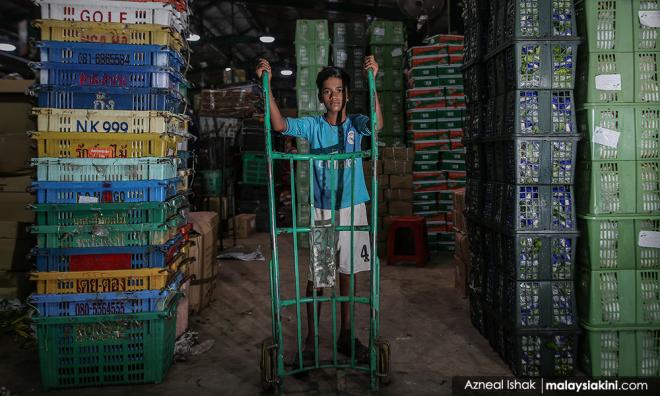 The Human Resources Ministry has challenged some points raised by Malaysiakini columnist P Gunasegaram in his article “Dr M and Kula are clueless about labour policy”.

"When it comes to managing any country’s workforce, there are no easy answers, but there are a lot of challenges," the ministry said a statement today.

"Some of the challenges faced by the Human Resources Ministry as mentioned in the article were on issues of employing foreign workers, managing what is described as 3D (dirty, difficult, dangerous) jobs, wage structure, expatriates and overall governance.

"What was not described by the author is the fact that the current minister (M Kulasegaran) has met with his stakeholders – the Malaysian Employers Federation (MEF) and the Malaysian Trade Union Congress (MTUC) – every month to discuss every decision on the management of foreign workers.

"Has the author considered that when he made his analysis?"

The Human Resources Ministry cited data from the Immigration Department, which show that there are 2,002,427 migrant workers in the country as of June.

These workers are from various Asian countries who ply their trade in manufacturing, construction, farming, services, agriculture, and domestic work.

"Before the introduction of the minimum wage, the ministry let the law of supply and demand dictate the income level. Nevertheless, this initiative did not increase wages in the manner it should have done.

"Thus, the government initiated the intervention via the introduction and implementation of the minimum wage in 2012 to set a minimum wage level in the hopes it would increase wages."

The Human Resources Ministry said it continues to works closely with its tripartite members through the National Labour Advisory Council (NLAC) to address issues affecting employers and employees.

Responding to the columnist's suggestions of automation, the ministry said it has been actively working with various educational agencies and training institutes under the TVET Empowerment Committee led by the Education Ministry to produce more graduates.

Besides that, the ministry is also working with the International Trade and Industry Ministry under the National Industry4WRD Policy. Launched last October, it is aimed at upskilling and reskilling the existing workforce, and training new talents in Industry 4.0 skillsets.

These two policies are expected to upgrade the skills and income of the Malaysian workforce, it said.

"To date, the data shows that we have allowed 123,077 expatriates to work in Malaysia. The industries these expatriates fills the most were found in the services industry (52.6 percent) and the information technology industry (30.4 percent).

"These highly-skilled expatriates are expected to transfer knowledge in their course of duty in Malaysia.

"The ministry believes these initiatives would reduce the dependency on a low-skilled foreign workforce, and increase the supply of highly-skilled workers for the industries."

The Human Resources Ministry conceded that there is still a need for foreign workers in the short term to fill in the resource gap needed by our industries.

"There are areas where (certain) industries find difficulty to employ local workers and where Malaysians may find the jobs less appealing.

"This gap arises due to increased education among our population who expect better jobs and better pay that commensurate with their educational attainment and lifestyle; and the changes in Malaysia’s economic structure from an agricultural to a services-based economy, among others."

"Malaysians, in general, have moved up the economic value chain. From the perspective of the ministry, the influx of low-skilled foreign workers into Malaysia is meant to fill the needs of industries in areas that local jobseekers were not available or suitable to fill."

Addressing the classification of the workforce, the ministry said that the skill classification is divided into skilled, semi-skilled and basic-skilled workers.

As of 2017, data from the Statistics Department shows the average wages of these categories were found to be RM4,574, RM1,947, and RM1,531 respectively, with an overall average of RM2,880. This does not include inflationary factors which are not under the Human Resources Ministry's jurisdiction.

"If we were to look at recent wages data, we would find that the wage scale has moved up from 20 years ago."

The ministry challenged the author's statement that the "import of labour impoverishes most Malaysians".

"This may not be accurate as Malaysians have made great strides in education, economy and employment, and overall living condition.

"Our poverty rate has greatly reduced and Malaysians are seeing greater freedom and security," it said.

The ministry went on to thank Gunasegaram, saying it took "cognisance of the author’s passion in wanting a better Malaysia".

"This is the hope of every Malaysian. The ministry would like to extend our gratitude to the author for keeping us on our toes with his views.

"This is in line with the government’s views that everyone plays a role in ensuring that our people play a check and balance role on the government of the day," it said.