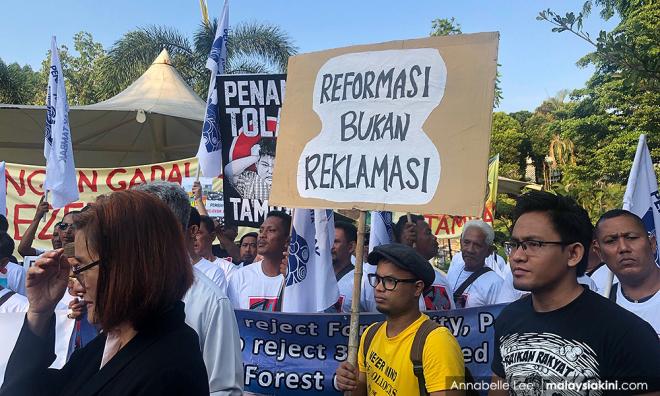 4,733 sessions? We only met CM once, says fishermen association

A fishermen association has denied that its representatives had met the Penang government for discussions since the Penang South Reclamation (PSR) was mooted in 2016.

Persatuan Nelayan Pulau Pinang chairperson Nazri Ahmad said his group had only met Chief Minister Chow Kon Yeow on May 31, to submit a list of demands for ex-gratia payment.

"Our association has never been invited for talks, even during the past reclamation exercise in Seri Tanjung Pinang, or Gurney Drive. Earlier, we were also not invited for the PSR.

"We were only invited for discussions after we expressed our grouses towards the project, but we did not meet them as many times as they (Penang government) have claimed," he told Malaysiakini.

However, Nazri acknowledged the effort by PKR president and Port Dickson MP Anwar Ibrahim to meet with the fishing community last Saturday.

He refuted Gerakan's remarks that the meeting was a "sandiwara" (drama) with no firm commitment. Meanwhile, PAS dubbed Anwar a "hypocrite" for seeking publicity.

"At least Anwar showed some sympathy towards the fisherfolks," Nazri said, citing the future PM's plan to discuss their plight with Chow (below).

He went on to express his disappointment over the Penang government's remarks about compensation to be paid to the group.

"It was like they want to stifle our freedom to protest against the project. So far, the state government has not offered us any compensation yet."

Nazri, who joined his 200-odd comrades and supporting NGOs at the march to Parliament on July 11, was referring to a series of tweets by Penang executive councillor Dr Afif Bahardin.

In his tweets after Anwar's meeting with the fishermen in Sungai Batu, Bayan Lepas, Afif said the engagement process had already begun in 2016.

Afif, who heads the PSR taskforce on compensation, said 4,733 sessions were organised with various sectors including the fishing community.

Meanwhile, Umno's former Pulau Betong assemblyperson Muhammad Farid Saad said the fisherfolks staged a rally at Parliament and met with Anwar, not for the sake of obtaining compensation from the state.

"They did it to express their concerns about the island and its future, it was not about compensation," he said.

Farid, who had previously raised a motion at the Penang Legislative Assembly to call for a review of reclamation projects in the state, reminded Anwar that his five assemblypersons had abstained from voting against the motion.

"Abstaining from objecting our motion meant that the five representatives supported the call to review the projects. It seems, Anwar has disappointed his own assemblypersons who had struggled against the project," he said.

To be implemented by SRS Consortium, PSR, which involves the creation of three artificial islands, was planned so that proceeds from its development and sale of land could finance the RM46 billion Penang Transport Master Plan.

Chow has agreed to meet Anwar, while the fisherfolk taskforce has been directed to start compensation talks with their representatives.