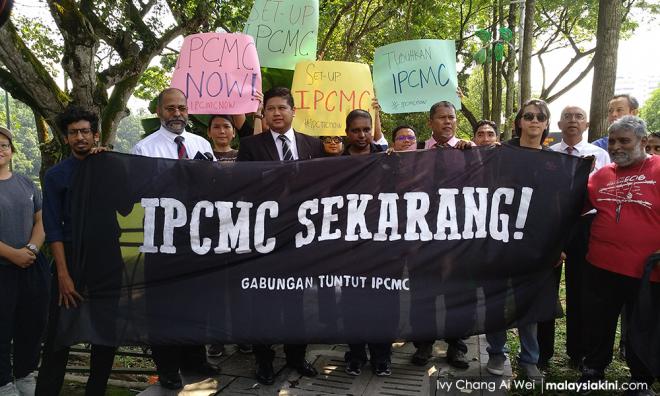 IPCMC is here - but does it have bite?

KINIGUIDE | The Independent Police Complaints of Misconduct Commission (IPCMC) Bill 2019 was tabled yesterday in the Dewan Rakyat, and the debate is expected to take place during the next sitting, when the House reconvenes in October.

In the interim, members of the public have three months to scrutinise the bill. Malaysiakini looks at the details to see if the IPCMC addresses past criticisms that the Enforcement Agency Integrity Commission (EAIC) - which it will replace - lacks bite.

The IPCMC was first proposed by the Royal Commission to Enhance the Operation and Management of the Royal Malaysia Police in 2005. It was watered down to the EAIC after fierce objections by the police force under then inspector-general of police Musa Hassan.

The EAIC can investigate, but cannot take action. Current inspector-general of police Abdul Hamid Bador (photo, below) is more receptive to the IPCMC in its original form when it was first proposed but has stressed that it must come with improved welfare for the police force.

The commission will comprise no more than 10 members. These members will be appointed by the Yang di-Pertuan Agong on the advice of the prime minister for a three-year term and no more than two consecutive terms.

The commission will then appoint a secretary who will act as the "chief executive officer".

The IPCMC will have the power to appoint officers, second legal officers from the judicial and legal services and engage consultants.

When necessary, committees intended for specific purposes can be set up and led by a commissioner.

While Parliament will ensure adequate funding for the IPCMC as a whole, the remuneration of commissioners will be determined by the Yang di-Pertuan Agong, and allowances for members of any committee set up by the IPCMC will be decided by the prime minister.

What misconduct can the IPCMC investigate?

The scope of misconduct that can be investigated is detailed in Section 22 of the bill. The commission may deal with the following complaints against police personnel:

How does the IPCMC work?

A complaints committee under the IPCMC will be in charge of receiving complaints of police misconduct from the public, which must be in writing.

The bill also requires the heads of departments in the police force to refer to the complaints committee if they receive any complaints of misconduct against their officers.

The complaints committee will then determine the classification of the complaint.

If it concerns misconduct laid out in Section 22 of the IPCMC, it will be referred to an officer of the commission for investigation.

The bill does not specify whether "relevant authority" includes the IPCMC or whether it will be referred to the police - which will be a subject of the complaint - or directly to the Attorney-General's Chambers.

While not clearly stated, it could mean the commission can exercise its discretion. It is worth noting that Section 22 does state that criminal wrongdoing by the police force is a form of misconduct under the IPCMC's jurisdiction.

Once the investigation is completed, the commission's officer will then submit the findings to the complaints committee.

If the findings show corruption or criminal offences, they can also be referred to the MACC or to a "relevant authority".

The disciplinary board under the commission will then commence proceedings to deal with the misconduct.

The complaints committee will have to inform the complainant about the action taken.

Alternatively, the commission can also initiate an investigation on its own accord, without having to go through the complaints committee if it is satisfied that there is significant public interest in the matter.

The IPCMC is required to table an annual report to Parliament, which must detail all matters referred to it and actions that have been taken.

What kind of punishment can be meted out?

The disciplinary board can take the following action(s) against an errant police officer: warning, fines, forfeiture of emoluments, deferments of salary movements, reduction of salary, reduction in rank or dismissal.

Under Section 36, the IPCMC can also impose a surcharge on any member of the police force under the Financial Procedure Act 1957, and this will be noted in the officer's record of service.

A surcharge is a sum imposed on someone employed by the government for certain failings, such as being responsible for the destruction of government property or the improper payment of public money.

The disciplinary board comprises five members - three from IPCMC, the inspector-general of police or his or her police representative who is of higher rank than the accused, and a representative from the Police Force Commission who is a member of the police force.

However, the prime minister can determine the board's composition and create regulations on procedures.

A special disciplinary board must be convened if the complaint is against the inspector-general of police.

Does the IPCMC have bite?

However, the IPCMC Bill also includes punishment for attempts to obstruct its officers.

IPCMC officers can compel any person, including the officers of the police force or public bodies, to provide information or surrender documents that can facilitate an investigation.

Non-compliance or providing false information can result in a fine of up to RM10,000 or imprisonment of up to two years, or both.

Anyone who hinders people from giving evidence to the commission or threatens, insults or harms people who have given evidence faces similar punishment.

Similar to a court, committing contempt against commissioners of the IPCMC is also punishable with a fine of up to RM10,000 or up to two years imprisonment, or both.

However, any prosection conducted under this bill must receive written consent from the Attorney-General's Chambers.

IPCMC members and officers will have an authority card, and like the police, they can present this card to persons from whom they wish to gather information.

Section 47 of the bill states the police must report to the commission any incident resulting in grievous hurt or death to any person under police detention or custody.

In such a situation, the commission can set up a task force to investigate the incident. The task force will have powers of investigation similar to the police - namely all investigation powers contained in the Criminal Procedure Code.

This is in addition to the powers provided under the IPCMC bill.

How Independent is the IPCMC?

According to Section 6(2) of the IPCMC Bill, a commissioner cannot be a current or former member of the police force.

Current members of the public service are also barred from sitting in the commission.

Commissioners are required to disclose their interest and recuse themselves from deciding on misconduct cases in which they have an interest.

The same condition also applies to officers and consultants to the IPCMC.

While the IPCMC can sue or be sued in its name, court action cannot be taken against the commission, its members and representatives, if they had acted in good faith. Witnesses are also given the same protection.

The IPCMC can direct the inspector-general of police or a public body to provide protection to any person assisting the commission.

This action can be taken if the commission believes the safety of the person may be prejudiced, or that the person may face intimidation or harassment.

Those who receive such a directive are required by law to comply.

The commission may cooperate and share information with other enforcement agencies but the information must be treated as confidential.

IPCMC commissioners and representatives are not allowed to disclose information they obtained through the course of their duty or they will face a fine of up to RM10,000 or imprisonment of up to two years or both.

The IPCMC's role is not only to look into complaints and act on them but also to help promote integrity and facilitate policies in that direction.

The commission's functions as listed are:

Which area does the IPCMC not have jurisdiction?

The IPCMC cannot touch on issues regulated under Sections 96 and 97 of the Police Act 1967, which are largely on administrative matters in the police force.

Section 96 of the Police Act 1967 deals with regulations concerning promotion and reduction in ranks, promotion and proficiency examinations, the definition of disciplinary offences, uniforms and arms, leave of absence and fees for extra police services.

Section 97 of the Police Act 1967 concerns administrative orders for the general control, direction and information of the police force.

This instalment of KiniGuide is compiled by Nigel Aw.

kiniguide
ipcmc
police
crime
corruption
human rights
Related Reports
Fourteen years after RCI, gov't tables IPCMC Bill
a year ago
The IPCMC, rule of law and freedom from fear
a year ago
'IPCMC should go hand-in-hand with guarantees of police rights'
a year ago
My role is to convince officers about IPCMC once it's finalised - IGP
a year ago