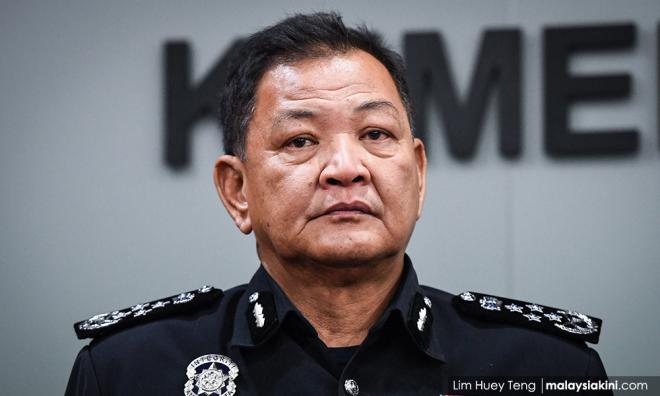 Yoursay: No one dragging IGP into 'political fight'

YOURSAY | 'Just get the internecine PKR warfare in the open and be done with it. We need to move on.'

Prudent: Inspector-General of Police Abdul Hamid Bador, if you don't want to be dragged into a political fight, please stop making political statements.

And please stop spouting nonsense about not being able to identify the persons in the video.

By refusing to acknowledge this, are you not deliberately lying to the public? And also not doing what your duty – picking up those engaging in the sexual acts shown, as it is a crime under Malaysian law.

Mushiro: No one dragged the IGP into anything. He himself made more political statements than he did professional statements. He still pretends not to understand the difference.

It is not for Hamid to talk about a "wicked pact (pakatan jahat)" and political conspiracy, claim the leader of a political party is involved, and arrest eight people when not even one of the actors in the sex videos can be identified.

If he has the evidence, just arrest the leader of the party involved.

Capo: Dear IGP, from your statement we know you are trying to put the blame on Anwar – as per instructions given from above?

If you want to play political games, go into politics. You have been appointed as IGP to serve the nation and its people with utmost integrity and accountability, not dance to Mahathir’s whims and fancies.

If the two actors in the video cannot be conclusively identified, then the question of mastermind doesn't even arise. It’s a blank, throw it into the dustbin.

Isn't that a clear indication that someone at the top is protecting the latter? Is the rule of law that they promised to uphold not meant for those in the corridors of power?

Anonymous_1538808416: Hamid says investigations into the sex videos reveal that a leader of a political party is the mastermind behind the “wicked pact to embarrass and tarnish the reputation of a certain individual.”

A ‘leader of a political party’ could only be referring to the president or other senior leaders.

Whatever it is, as the prime minister-in-waiting, I don't think Anwar is so stupid to get involved. I am more inclined to believe this is a setup to destabilise PKR and derail the handover of the premiership.

We have seen how Prime Minister Dr Mahathir Mohamad has protected Azmin since the sex scandal broke.

Mahathir loyalist Khairuddin Abu Hassan even made a police report to reopen the investigation into Anwar's past sex clips on the pretext of 'defending' him. More like the opposite.

Clearly, this is directed by someone else and aimed to destabilise PKR for good. But the party is already in self-destruct mode anyway.

Quigonbond: ‘Political party leader’ – there’s no need to beat around the bush. If you want to say it's Anwar, just do so.

‘Evil conspiracy’ – how do you know if the facial recognition came back as uncertain instead of a clear no, and the video is already certified as genuine?

The Home Ministry is under a Bersatu leader. Azmin doesn’t even need to feel hot under the collar, since he has such strong support from Bersatu to take Anwar down.

Just get the internecine warfare in the open and be done with it. The nation needs to move on.

P: Another thought would be that all this drama was not created by Harapan themselves. No, not Mahathir for Bersatu or his son, and not Anwar wanting to become prime minister. What if it came from the other side?

Who else would want Harapan to implode? Umno and Low Taek Jho, who is still in hiding waiting for ‘Bossku’ to take back the premiership?

Constitutional Supremacy: This is no-nonsense and straight-shooting IGP. Thus, his statement is the truth based on the evidence available. People had been pestering him to conclude the matter early.

When he does that and announces the results then some people say he is biased. These must be from PKR members not satisfied with the results.

Casey: What the IGP said is consistent with the findings of the Australian experts.

SBS News quoted Deeptrace CEO Giorgio Patrini as saying: "None of the analysts could confirm that Azmin is the man in the video, they only concluded the video appears to not have been digitally altered."

Caripasal: Does the IGP really think that people would believe him when he says "failed facial identity”?

Anonymous_1527925538: @Caripasal, read the news properly. The result of the "failed facial identity" came from CyberSecurity Malaysia, not the police. Someone also sent the video to Australia with the same results.

Roger 5201: Is there anyone else who could and would spend “hundreds of thousands” of ringgit and possibly gain from this exposé?

KPE: Spend so much money, but still cannot produce a high definition video that leaves no doubt as to the identities of the people in the video. Hard to believe.

Vgeorgemy: If that is the case, the police must invoke the Anti-Money Laundering, Anti-Terrorism Financing and Proceeds of Unlawful Activities Act 2001 to trace the source of the funds on the detainees under remand.

If the US Department of Justice and other foreign authorities can trace the funds siphoned out of the treasury and 1MDB, these transactions can easily be traced.

Annonymous: Good try, but it is not so easy to destroy Anwar, as the rakyat is sick and tired of these filthy games.

The fact is, the rakyat resoundingly voted for Pakatan Harapan, with Anwar as PKR president of the largest party in the coalition.

Jonah: @Annonymous, please don't include the rest of us into your ‘rakyat’ that condones Anwar being part of the conspiracy. The real rakyat wants Malaysia to progress. Not get stuck in gutter village politics.

SDMan: Barely a year, and Harapan is already imploding. The people of Malaysia trusted you and this is how you repay us?

Bunch of self-centred politicians who do not care about the people and the country. Clamouring for positions when the people are suffering, the economy is deteriorating and the currency is weakening. Don’t expect the people to give you the mandate in the next general election.

Personally, I couldn't care less. I am more interested in other, more important news – automatic voter registration, the recent exposé on Pasir Gudang rivers, or the plight of the Orang Asli.

This story is just more of the same pointless gutter politics that is so ingrained in our political culture that doesn't benefit anyone – unless you consider entertainment beneficial.