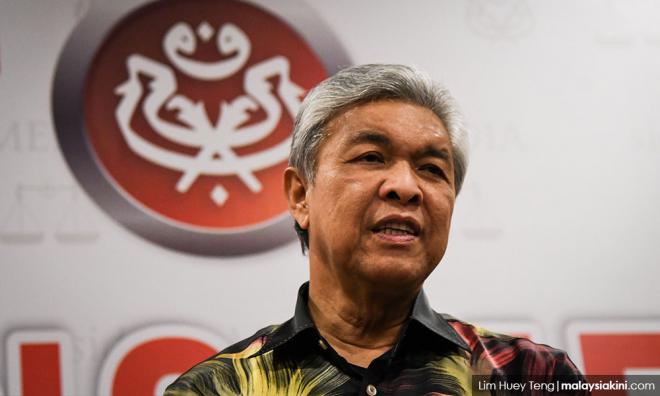 Thank you, Zahid, for the latest proof of Umno’s toxic lies

MP SPEAKS | Here, I record my thanks to Umno president Ahmad Zahid Hamidi for providing the latest proof of the toxic politics of lies, race and religion to incite fear, suspicion, distrust and hatred in the script of klepto-theocracy, even resorting to the stupidest of falsehoods.

I must confess that I was taken aback by Zahid’s rejoinder to Bersatu chairperson Dr Mahathir Mohamad’s claim that Umno practised a culture of becoming “dumb and dumber” – with his assertion that Mahathir was being “fooled” by the DAP.

Was Zahid suggesting that Mahathir was obeying a DAP directive when he advised Bersatu to avoid being caught in a cycle of self-serving leaders who will prevent others with more capability to rise and succeed them, as happened to Umno?

Was Zahid saying that Mahathir’s reason for Umno’s eventual downfall when the people moved to reject self-serving leaders was the invention and creation of DAP, and that Mahathir does not have the IQ to think and analyse things on his own?

Mahathir had said: "In order to preserve his position, an Umno branch chief is not keen to allow others who are more capable to be members. The only ones who can join are those dumber than him.

"But one cannot live forever, so when this branch leader passes away, his successor will be even more stupid, until eventually, the branch becomes a dumb branch."

Was Zahid saying that Mahathir (photo) was only parroting what DAP had told him about Umno branches becoming “dumb and dumber”?

It is not my practice to respond to the lies and falsehoods which irresponsible and opportunistic proponents of klepto-theocracy have poured out against me.

But I want, in this instance, to clarify that I have no knowledge whatsoever that Umno leaders have become “dumb and dumber” over the years, and I concede that Mahathir has greater knowledge on this matter, as he had been Umno president for 21 years.

In fact, Mahathir has admitted that the rot started since the time he helmed Umno as its president.

Sad to say, the best example of this process of the rot in the calibre of Umno leadership is none other than Zahid himself, who could even say such a stupid thing as to attribute to DAP the origin of the analysis that Umno leaders are becoming “dumb and dumber.”

As if to immortalise his position as the “dumb and dumbest” Umno president in 73 years, Zahid said this: “Elok sekiranya berpisah kongsi dengan DAP. Parti itu menjadikan PH sebagai boneka mereka. Saya kira eloklah beliau bermuhasabah & berusaha berhenti daripada diperbodohkan oleh DAP dlm Pakatannya sendiri (It would be nice to part with DAP. That party has made Pakatan Harapan their puppet. I think it is better that he reflects on himself and stop being fooled by the DAP)."

Zahid is providing a living example of Umno leaders being “dumb and dumber” and unable to be wise in evaluating, or being patient and loyal in the political struggle.

Otherwise, how could the Umno leaders allow Zahid to return from garden leave to resume the mantle of Umno president, when he has made history in the Malaysian courthouse with a total of 87 criminal charges related to corruption?

Zahid has even beaten the former Umno president Najib Abdul Razak, who faces 42 criminal charges, and is singly responsible for bringing Malaysia to the infamy, ignominy and iniquity of a global kleptocracy.

He also beats the former Sabah chief minister Musa Aman, who faces 51 charges, and the former 'First Lady' Rosmah Mansor (photo), who has with 20 criminal charges against her.

Zahid appears to be in good company as Najib is the newly appointed adviser of BN, and nobody can say whether it is Zahid or 'Bossku' who has the final say about the direction of BN and klepto-theocracy.

Has Zahid forgotten what he said when he announced taking garden leave as Umno president seven months ago?

He had referred to “punishing” conditions imposed on Umno, and the rejection and insults, but even “humiliation, in a number of meetings he attended, as if Umno was as unclean as the faeces of animals deemed haram.”

Were these Umno indignities and humiliations a vindication of what Mahathir said about Umno branch leaders becoming “dumb and dumber,” or was Zahid parroting what DAP was telling him – as if DAP is not only directing Mahathir but also directing Zahid as the grand puppet-master in Malaysia?

In actual fact, whether Umno branch chiefs are getting “dumb and dumber” is no business of DAP and not within my ken.

But can Zahid explain why he is dragging DAP into the picture in this debate with Mahathir? Is this because Umno leaders have become “dumb and dumber” over the years?

The best evidence that Umno leaders are getting “dumb and dumber” over the years is their continued silence – even now – on the 1MDB scandal – when the whole world had been condemning Malaysia for becoming a global kleptocracy as a result of the 1MDB scandal!

Would a leadership that is not becoming “dumb and dumber” show no sense of remorse or contrition for the global kleptocracy of the 1MDB scandal, especially after the United States Department of Justice filed a 250-page kleptocratic forfeiture litigation for US$1.7 billion of over US$4.5 billion in 1MDB-linked assets?

Mahathir had led the campaign against Najib’s 1MDB scandal. Nobody would suggest that the first three prime ministers, Tunku Abdul Rahman, Abdul Razak Hussien and Hussein Onn, would have kept quiet over the 1MDB scandal.

Is this another sign that Umno leaders have become “dumb and dumber” over the decades?

Another test whether Umno leaders have become “dumb and dumber” is whether the Umno leaders in the first six decades of its history would have agreed to promote klepto-theocracy, which has no respect for facts or truth, and where “Malu Apa Bossku” is the very symbol of a campaign which has lost the sense of right and wrong and totally bereft of moral values as to able unable to feel any shame for “kleptocracy at its worst” 1MDB scandal?

mp speaks
lim kit siang
toxic lies of umno
ahmad zahid hamidi
Related Reports
Zahid refutes Dr M on 'dumb and dumber' Umno
a year ago
Crying shame that some BN leaders still trying to keep a lid on 1MDB
a year ago
Nazri reminds Zahid that he is no longer Najib's pol sec
a year ago
Nazri and KJ: Insane to expect better results with Najib at helm
a year ago