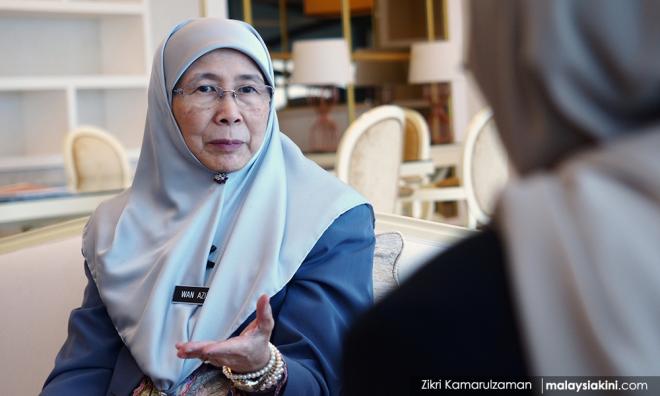 This is after PKR senator Mohd Imran Abd Hamid proposed a law protecting men from being "seduced" into sexually violating women.

"Even though Imran has apologised and retracted his statement, I am of the opinion that gender sensitisation sessions should be conducted, especially for elected and appointed representatives."

"[This is] so that the causes and consequences of violence against women can be better understood together," she said in a statement today.

Imran (photo), a retired navy admiral, had told the Dewan Negara that there needs to be a law to protect men from the actions, words and clothing of women, so they do not commit crimes such as incest, rape, and molestation.

Wan Azizah – who is also the women, family and community development minister – said that the senator's remarks were shocking and the victim-blaming unacceptable, and that both have no place in the New Malaysia.

"As a PKR senator, Imran should be more considerate and sensitive to the party’s stand on violence against women, including sexual violence and harassment.

"Political leaders, both elected and appointed representatives, must play a role in ensuring women and also men, are constantly protected from sexual violence," she said.

Sabah PKR Wanita called for him to be replaced due to his repeated insulting remarks against women.

Previously, the former Lumut MP told the Dewan Rakyat in 2015 that the “sexy dressing” of athletes could lead to zina (illicit sex).

Women's Aid Organisation (WAO) executive director Sumitra Visvanathan also called on the Parliamentary Select Committee on Rights and Gender Equality to look into the matter of gender sensitisation training for all MPs and senators.

Sumitra further questioned the silence of other senators, after Imran issued the proposal in the Senate.

"What the senator said is unacceptable, and his retraction is far from sufficient. He should resign. It’s not the senator’s first offence. Such blatant misogynists shouldn’t be serving in the Senate.

"Additionally, we need to question why the senator even felt entitled to make such a statement in Parliament, and why other senators did not speak out immediately," she said in a written response to Malaysiakini.

Pointing out that the Dewan Negara should represent all sectors of society, WAO also called on political parties to appoint more women and women’s rights activists.