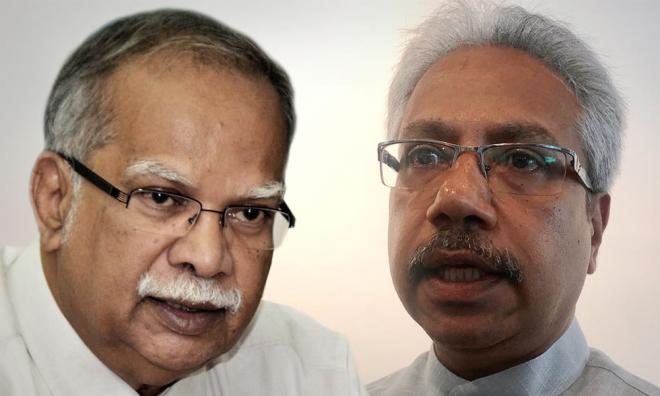 The war of words between Penang Deputy Chief Minister II P Ramasamy and Minister in the Prime Minister's Department P Waythamoorthy shows no sign of abating with the former calling the minister's response ‘pathetic'.

"It is pathetic that Waythamoorthy took issue with Transparency International (T-I) over the disbursements of funds meant for the Indian poor through the agency of Mitra," said Ramasamy in a statement today.

"I agree with T-I that direct disbursements for the poor and the needy is the way to go. The old and archaic method of funds being mediated through NGOs not only limits the fund intended for the poor but also gives rise to abuse of power and corruption," he said.

In the latest exchange between the bickering pair, Ramasamy lamented that rather than accepting the idea proposed, Wathyamoorthy criticised them for not understanding the rules and regulations that stand in the way of direct disbursements.

"I am not disputing the obstacles that prevent the direct disbursement of funds to the poor, but the question is not so much legal or procedural, but justice for the poor.

"After receiving RM100 million from the government some time ago, why didn’t he address the legal and procedural issues earlier but only when questions were raised," asked Ramasamy.

Ramasamy questioned whether Mitra was the right body to focus on the needs of the Indian poor.

"Sedic, which operated during the BN days might not be there, but is Mitra any different from this agency?"

To date, Mitra has disbursed about RM31.5 million to more than 50 NG0s, training centres and private companies. The list of allocations can be found on the Mitra website.

"I think there is still time for Waythamoorthy to think about this matter and take corrective measures," said Ramasamy, who is also Perai assemblyperson.

Despite the pair trading barbs through the media, Ramasamy insisted his words were not personal.

"I say it again, I have nothing personal against Wathyamoorthy or the agency under him. He needs to be transparent not just to the government or the prime minister, but also to the Indian public.

Ramasamy claimed that during BN's rule, the Indian community was cheated of much-needed development funds and he did not want this to be repeated under Harapan.

"Recently after much pressure, he has sought to eat the humble pie by calling for a meeting with Harapan Indian MPs to brief them on fund disbursements. However, he is yet to call Harapan's Indian state-elected representatives," Ramasamy said.

Ramasamy, a long time DAP member, reminded Waythamoorthy that while the latter was not a member of a Harapan coalition party, he was still part of its government.

"He might think that he is not a Harapan member, but surely without Harapan, he would not have been given the present minister’s post. Therefore he must not betray the trust that Malaysians have placed in the Harapan government," said Ramasamy.

Last Saturday, Ramasamy called for Waythamoorthy to hold a town hall session over the matter.

Waythamoorthy also asked Ramasamy to pick up the phone and talk to him instead of making public accusations through the media.

governance
waythamoorthy
ramasamy
mitra
Related Reports
Waytha: Mitra can’t give ‘direct’ allocations, TI-M should check facts
a year ago
Give funds directly to needy, Transparency Int'l tells Waytha
a year ago
Indian poor need direct assistance from the government
a year ago
Answers please, Minister, on how Mitra funds are being distributed
a year ago