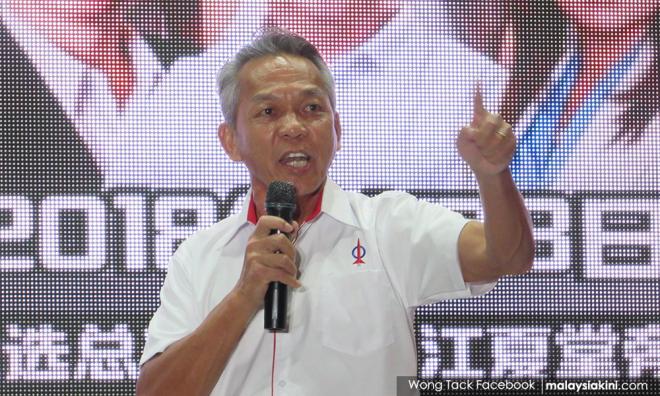 A DAP lawmaker has exhorted the people to be united and fight to “regain ownership of the government” in order to steer it in the right direction.

When efforts to resolve issues through internal channels have failed, Wong Tack said it is imperative for the people to step in.

“What needs to be done now is that the people must go to their respective MPs and state assemblypersons to demand them to make a stand and speak out on Lynas,” he told Malaysiakini this evening.

“We cannot blame the government if we ourselves don't have the courage to speak up. The people must also become a part of the decision-making process. We need a strong collective voice.

“In Malaysia Baru, decisions especially those that will adversely impact the wellbeing of our children and environment must not be left to a few in the top echelons,” he added.

The Bentong MP also dismissed MCA's call for him to resign in wake of Prime Minister Dr Mahathir Mohamad stating that the renewal of Lynas' operating licence would depend on the rare earths processing plant furnishing a plan to deal with its radioactive waste.

According to Wong, MCA is bereft of the moral standing to make such a demand.

“Secondly, is this really what the people want? To ask all those who have stood up to fight for their interests to resign? Wouldn't this result in all 'yes men' remaining in the government?

“Wouldn't this give rise to the creation of a government made up of unscrupulous people who will have complete freedom to do whatever they want?” he asked.

Furthermore, Wong said throwing in the towel would mean succumbing to the “propaganda of the people's enemies” to make the people act against their own interests.

“Because instead of fighting those who made decisions against them, the people are attacking those who are fighting to protect their interests,” he added.

MCA vice-president Ti Lian Ker had urged Wong and Kuantan MP Fuziah Salleh (below) to step down, claiming that the pair rode on the anti-Lynas sentiment to win in the last general election.

He had said by-elections should be held for both the seats to gauge the public's support towards the Pakatan Harapan government in light of the new development.

Lynas' current permit to operate the plant in Gebeng, Pahang, would expire on Sept 2. There has been no indication from Putrajaya if it would be renewed.

However, Malaysiakini learnt that the current permit might be extended for six months to allow Lynas to design a waste disposal plan.

In the 1980s, the federal government had closed down Asia Rare Earth Sdn Bhd's in Perak due to the presence of thorium hydroxide from mining operations.

Following Mahathir's statement, Wong said it was beyond logic for the current government to allow Lynas to continue operating.

Whereas, Fuziah reiterated her opposition to Lynas but claimed there were ministers formerly with BN in the current administration who appear to view the issue from the perspective of the previous government.