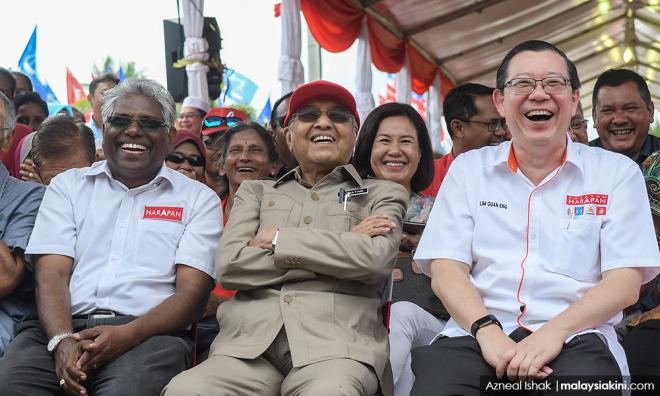 YOURSAY | ‘Draw ‘redlines’ that Mahathir must not be allowed to cross.’

Average Joe: As a Chinese, I don't have any issues if Chinese students learn Jawi. After all, we have many young Chinese learning Japanese and Korean. It is just another form of writing.

If you are steadfast and believe in your own faith and religion, no writing is going to make you change your faith or religion.

However, there is a great deal of mistrust because too many promises have been made but broken over the past 60 years. It will take a much longer time for us to regain this trust.

DAP is in an unenviable position but I believe that its leaders are sincere in solving problems caused by friendly fire.

Drngsc: This issue of khat shows that Malaysians as a whole do not trust Prime Minister Dr Mahathir Mohamad. True, technically speaking, khat is neither Islam nor a new Malay language.

There are many educational issues of much greater importance, and he decides to push khat. Many see this as a move to destabilise DAP and cause infighting within DAP in particular and non-Malays in general.

The second issue is communication. The DAP must do much better in communicating issues of importance to Malaysians.

It looks like Deputy Education Minister Teo Nie Ching did not do her homework or was caught in a trap devised by Mahathir.

DAP has to be more alert. Do not trust Mahathir. Check and double-check everything of importance. Consult among DAP leaders.

Yes, Pakatan Harapan is a coalition, but unfortunately, in this coalition government, the minority, an egoistic old man, just cannot accept that he must consult and discuss with others on policies that affect all Malaysians.

Draw "redlines" that Mahathir must not be allowed to cross. Indeed, it is better to allow Harapan to implode than to betray your own mission. We must maintain our principles and our struggles.

Anonymous_ba958b7b: A little bit of knowledge and a lot of propaganda - these sum up the intellectual capability of most of us in this country.

DAP leader Liew Chin Tong is attempting to calm the situation, while many are fanning the flames. This man has worked hard all these years to secure a kinder and better country for us all. Kudos to Liew.

It has been one of the most important issues which DAP has been championing for decades but has now been quietly dropped. This was despite you having Teo as deputy education minister but she has become mute about this.

Liew is misleading the rakyat. Why do we need to learn these six pages of khat in the first place? Former minister Rafidah Aziz had already said that khat is of no use to our economy, so why is there is a need to learn it? Why not let the students focus on science and maths?

Isn't it clear that Mahathir is trying to showcase Bersatu's capability to woo PAS and BN to form a grand coalition?

Rupert16: Either it’s Liew and DAP who still can’t see the wood for the trees or they are deliberately appeasing Mahathir and turning a blind eye to what he and Bersatu are trying to do in using our education system to gain favour from the Malays.

Anonymous_1cfb3ab6: I support Liew’s statement that DAP shouldn’t withdraw from Harapan nor the government.

This would be playing into Mahathir’s hands as he will simply invite Umno and PAS to join the government (together with PKR deputy president Azmin Ali’s faction, Amanah and Warisan) and kick out PKR president Anwar Ibrahim’s faction.

The old fox doesn’t care about the next election as long as he has the two yes men - Azmin and Mukhriz Mahathir - as his successors, and the national car project and the crooked bridge.

DAP has to fight from the inside. But I disagree with Liew that DAP should continue to support Mahathir.

It is time for a change of leadership and if it fails, call for a snap general election. Even Umno and PAS wouldn’t mind an election, rather than take their chances with Mahathir.

DAP and the remnants of PKR shouldn’t be afraid of another election even if it means another term in opposition as given the s**t the country is in, they will come back stronger after the next GE.

StrainingGnats, SwallowCamels: Liew, thank you for your attempt at explaining.

1. "Fox News in the US plays the role of setting agendas or perspectives. Pro-Trump social media influencers and cybertroopers then dance to the tune and take it to the next level in cyberspace through peer-to-peer apps such as WhatsApp. The illusion of a large ‘consensus’ of sorts, more like an echo chamber, is thus created."

With due respect, you might have gotten Fox wrong. Are you sure you are not talking about CNN, MSNBC, etc? What is the basis or source of your opinion?

2. "There has simply been too much disinformation about the learning of Jawi as the opening of floodgates for Islamisation."

This the second of your "basic facts”. This is an opinion and not a fact. But it may well be that the teaching and learning of Jawi are intended to be an opening for Islamisation.

May not be the floodgates or the only opening but an opening nonetheless. Time will tell if indeed the idea will be implemented.

Cynical: Liew, do you think the whole mess is created by Sin Chew Daily? You are merely parroting your boss (Finance Minister and DAP secretary-general Lim Guan Eng) who has an axe to grind with the newspaper. Do you think that Malaysians are stupid?

Read Azly Rahman's column. Khat is not only Jawi. Khat is Arabic, used almost exclusively to write Quranic verses in the form of calligraphy. If khat is Jawi, why not call it Jawi instead of khat?

Salvage Malaysia: Even the ordinary folks can see that Azmin’s case was to weaken PKR by amplifying the rift (with Anwar). Khat and Lynas are to weaken both DAP and PKR. Only one party will emerge stronger and victorious, Bersatu.

If Lim is able to boost the economy fast, resulting in the people and businesses prospering under Harapan, then all of these are non-issues or it could be easily dampened.

Lim, however, is only good at blaming. What a shame after 61 years to finally win the federal government and now you keep scoring own goals. Umno and PAS are laughing on the side as Harapan implodes.

My2cen: Liew is completely wrong to put the blame squarely on Sin Chew Daily for printing and highlighting the news.

The blame rests on each minister/deputy minister, especially those from DAP, who knew about the issue and did not do the right thing to tell the minister to hold on until they have had a chance to consult and seek feedback from Chinese and Indian educators/stakeholders.

The Harapan cabinet has a “perfect” record of shooting itself on its foot on every policy matter since it was formed.

They also did not go to the ground to inform the people what is Icerd (International Convention on the Elimination of All Forms of Racial Discrimination) and the Rome Statute (of the International Criminal Court) were before they decide to ratify both international conventions.

If anything, Sin Chew has done its job as the fourth estate and look after the interest of those affected.

My Understanding: Liew, when the mandate was given to DAP and Harapan, it was based on a manifesto which you came out yourselves; not by any newspaper company such as Sin Chew Daily, Utusan Malaysia or Malaysiakini.

You screwed up and are now trying to lay the blame on someone else.