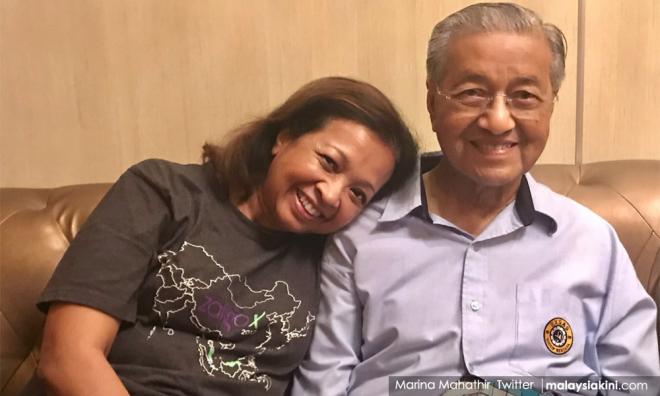 Yoursay: Even Marina can’t convince Dr M to get Zakir out

YOURSAY | ‘There’s no point telling Mahathir, even if the one who said it is his own daughter...’

The sheer arrogance of this woman, daring to express her personal view instead of lecturing her father.

Marina has no right to share her opinion. Instead, she must tell her father off. That is the only action she is allowed to take.

Docsarna: Just because her father is the prime minister doesn't mean that Marina agrees with all that her dad does or says.

Please have a little more sense, people, and show some maturity in your thinking.

Marina has made a statement which depicts her thoughts, and she clearly condemned racist preacher Zakir Naik.

So instead of throwing dirt at her, praise her for having the guts to speak out, unlike most politicians on both sides of the political divide who have lost their cojones for the sake of votes.

Capo: Marina's call sounds cheap and hollow. Her father gets a wanted fugitive to denigrate the Chinese and Indians, then she and Bersatu Youth chief Syed Saddiq Syed Abdul Rahman come out and say "Oh, we are family."

If non-Malays were considered as such, Mahathir would have listened to our voices of unease about Zakir's continued presence in the country.

Instead, he is using Zakir to the maximum to sow racial discord and further his own agenda. Hence, when you act to destroy your own ‘family,’ that ‘family’ reserves the right to throw both Mahathir and Zakir out.

We simply deserve better. We deserve to choose who leads us better.

JW: There’s no point telling Mahathir, even if the one who said it is his own daughter, because he is always looking for ways to gain politically for himself and himself alone.

Mahathir has no qualms playing up race and religion, no qualms at all acting racist, because he believes no one can touch him and he is above the law. That's the kind of old man he is.

Nothing shames him. No desire to listen and learn from others, including the younger generations, because he believes his racist thinking is the best kind of thinking there is. It’s disgusting and sad.

Wira: Mahathir, you pleaded with us to give you and your coalition a chance to set this country right again.

Keeping and giving Zakir more rights than our citizens to inflame racial sentiments with impunity is not right. This is not the new Malaysia we voted for last year.

Please deport him. He can choose whatever place he wishes to go to.

You need not send him back to India if you are worried about Muslim backlash in Malaysia. However, he must not be allowed to remain here. He broke our sedition law.

Wg321: Zakir Naik is not charged with terrorist acts in India. He is charged for money laundering in India.

Our legal system and the Indian legal system are the same as both were under former British rule. So Mahathir should not worried that Zakir Naik will not be given a fair trial over there.

In fact, our Penal Code is adopted from India wholesale. India is not China.

Actually Mahathir, Umno and PAS are all using Zakir Naik to win Malay votes. That is why is Zakir Naik is treated like a VVIP. So, it is useless to ask Marina to talk to his father.

Being Right: Ask Zakir this: did Indian Malaysians vote for Narendra Modi during the recent election in India?

Anyway, Zakir does not even have the guts to face the law in the country where he was born. Why run away?

Why do we take Malaysian offenders to court, but at the same time keep a fugitive who seems to have committed wrongdoing in his mother country?

Why are we protecting someone who has come to this country to hide, and also who seems to be creating hatred among the various races?

David Dass: What Zakir said in Kelantan does not need interpretation.

In fact, anyone who wants to know the character of this man should just go on YouTube and listen to his videos.

He misquotes, misinterprets and cites non-existent sources to support his claims that Christians deliberately distort the Bible to misrepresent the truth.

Zakir is a charlatan. He fools only the ignorant, and clearly profits from it. By questioning the status of Chinese and Indian Malaysians, he has overstepped the line. Some Malays may agree with him. But the majority will not.

Rightsaidfred: Someone has given Zakir the greenlight to stoke racial fires.

Mahathir, please do something. This man has directly insulted all Malaysians, Malays, Chinese, Indians, Dayaks and others, who wake up every morning to make this country tick.

Malaysians stood behind you, Mahathir, when you issued your call to duty before GE14. Jangan mudah lupa (don’t forget so easily), Mahathir. Send this preacher home now.

Honma: So this preacher from India was giving a talk to a predominantly Malay crowd in Kelantan but spoke in English?

Now you know why his supporters are saying that he was misquoted.

PAS, who brought this ‘popular preacher’ to Kelantan, did so for political mileage. They don't care whether the Kelantanese folk understand what Zakir actually says.

Little does he realise Mahathir has his own agenda and nothing will interfere with what he has already decided.