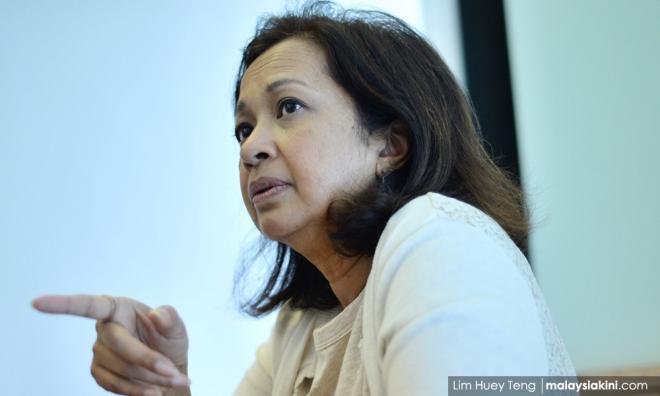 Social activist Marina Mahathir is the latest to join the chorus condemning preacher Dr Zakir Naik for calling on Chinese Malaysians to leave the country.

Sharing a Malaysiakini report on the controversial comments, Marina questioned Zakir's standing in making such a call.

"That's rather a lot of my family... who are you to tell us that?" she tweeted.

Zakir reportedly made the remarks against Chinese Malaysians during a talk in Kelantan last Thursday in response to calls for him to leave the country.

He also claimed that Hindu Malaysians were more loyal to Indian Prime Minister Narendra Modi than to Prime Minister Dr Mahathir Mohamad, although he later said he was misquoted.

Marina's tweet has attracted scores of replies, many of which urged her to advise her father Mahathir to deport the preacher.

"Tell your dad laaaaa... to chase him out... I remember you came to Padang Kota during GE14... you saw how we Malays, Chinese, Indians and the rest, you saw right in front your eyes how we gathered united and now your dad is backing one guy to break it," netizen @V_vendha tweeted in response.

"Right. Please tell that to your dad!" tweeted @Gaffor.

"Please. For the love of God and Malaysia, we cannot have Zakir in Msia. He is causing rifts now. He is daring now," said @Malacire.

The prime minister previously stated that Zakir (right in photo) would not be extradited to his home country of India, where he is wanted on charges of money laundering and terrorism. He has denied any wrongdoing.

Citing concerns that Zakir would not get a fair trial in India, Mahathir had likened Zakir's case to that of former police officer Sirul Azhar Umar – whom Australia has refused to extradite as he is facing the death penalty for the murder of Mongolian model Altantuya Shaariibuu.

'No place for such statements'

Shahril took to Twitter to say that there is no place for such statements in Malaysia, especially coming from a non-citizen.

"No two ways about it: There is absolutely no place for statements like this, not from anyone, much less a non-citizen," he said.

Zakir was granted permanent resident status in 2012 by the previous BN administration.

It is believed that Shahril is the first Umno leader to openly criticise Zakir since the issue surfaced yesterday.

His tweet did not fare very well, however, with many netizens criticising him for jumping on the issue before more senior leaders in his party.

Some also claimed that Shahril did not understand the context of Zakir's speech at the event in Kelantan.

The Umno Youth leader defended his criticism, saying he had seen the video of Zakir's speech.