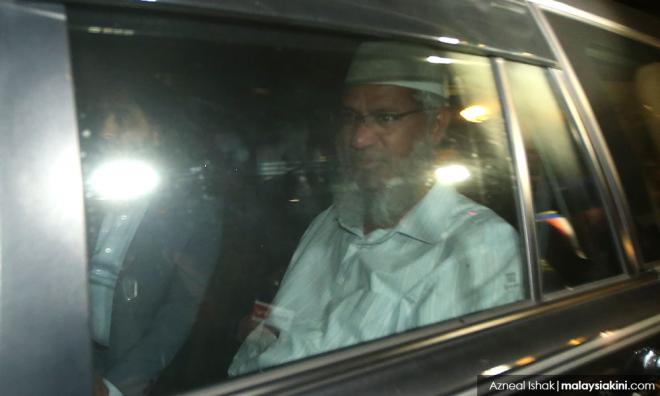 Police will continue questioning preacher Zakir Naik at Bukit Aman on Monday over his remarks about Hindu and Chinese Malaysians.

Federal CID director Huzir Mohamed said police had questioned Zakir from 3.30pm yesterday and stopped at 7pm when the preacher asked for a postponement so that he can break his fast.

The Indian-national came under fire for saying that Hindu Malaysians supported the Indian government more than Prime Minister Dr Mahathir Mohamad over his charges in India. He had also made some pointed remarks about Chinese Malaysians, calling them "guests".

He claimed to have been misquoted on both remarks.

Meanwhile, police will also be taking a statement from tycoon Khoo Yew Yin over his remarks criticising the armed forces.

Koon had criticised the armed forces, saying many personnel did nothing except "eating and sleeping". He has since apologised for his remarks.

Besides the preacher and the tycoon, Huzir said police are also investigating educationist group Dong Zong.

This was after a police report was lodged over Dong Zong's claims that the introduction of Jawi khat at vernacular schools was a form of Islamisation.

Zakir and Dong Zong are being investigated under Section 504 of the Penal Code, which covers insult with intent to provoke a breach of the peace, and is punishable with up to two years’ jail, a fine, or both.

If convicted, this is punishable with up to two years' jail, a fine, or both.

Koon is also being investigated under Section 233 of the Communications and Multimedia Act for improper use of network facilities, which is punishable with a fine of up to RM50,000, one year's jail, or both.