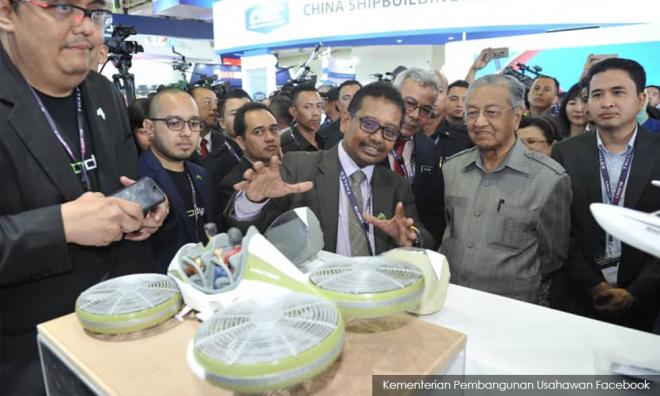 Yoursay: Flying into oblivion with a car no one asked for

YOURSAY | ‘Don't embarrass the country by making it sound like a national initiative.’

Malaysia stands by its views on flying car project - Redzuan

I think what Redzuan means is that “Prime Minister Dr Mahathir Mohamad stands by his views on the flying car.”

It’s pretty obvious that Malaysia disagrees. But then that’s how democracy works in a dictatorship.

Malaysian-United: The flying car is a half-baked idea. Don't embarrass the country by making it sound like a national initiative.

A lot of Malaysians expressed disgust for it from the start, but Redzuan’s big ego won't let him quit. What was Mahathir thinking when appointing him to the cabinet?

JDoe: Dear Mahathir, thank you for kicking Umno out. You have done your part. But please stop destroying this country further. It is time to let go.

At 94, you have nothing to lose, but the next generation – including the young ones in your family – have this entire country to lose.

Each of us has different dreams for ourselves, but only one dream for this nation. I want to see a peaceful and prosperous nation. I hope you can let that happen.

Quo Vadis: With this man as the so-called entrepreneur development minister, is there any wonder why there is no progress at all in this country after a year and a half of Pakatan Harapan being in power?

There are tons of other entrepreneurial initiatives that are more beneficial to this country, especially technology relating to environmental protection, waste management, safety, agriculture, etc, that really require backing and easing of barriers.

Why not focus on these real and tangible initiatives? Yet a flying car is touted as the solution to our traffic chaos? It really looks like there is a huge prawn hiding behind the stone. Jokers one and all.

Anonymous 5237890145285379: @Quo Vadis, I totally agree. There are so many other ideas and initiatives that are so much more realistic and easier to implement with the help of a small amount of capital.

Some roadside vendors are making millions from their own enterprises. There are others who are struggling, like the SMEs (small and medium-sized enterprises). These are the people who should be encouraged.

Just look at Shenzhen in China. The authorities there did a lot to encourage new companies and new industries. DJI is one such company. It took a loan of a few thousand dollars to start up the drone industry.

But for Malaysia, our ‘flying car’ minister is likely to think all these small companies are not making a big splash enough to go with his ego.

The minister might have said it is a private initiative, but I would take that with a huge pinch of salt. We do not have information on the company, but I will not be surprised if the backers are some government agencies – just like the new third national car.

The prime minister did not initiate the project. Just some government agencies doing it without his knowledge. Believe it?

As Mr ‘Malays gave away too much’ says, the entire ecosystem of the flying car industry may be worth US$500 billion (RM2.3 trillion) or more.

But what does that translate into your flying car project? How much do you think the project will get out of the US$500 billion? Yes, you can have a local captive market due to monopoly (remember Proton Saga?) but that is probably a minuscule portion of the US$500 billion.

Second, can you get the car off the ground? We are a third world country, not known for high technological inventions or innovation. We can’t even build a land-based car to compete with other car companies.

Furthermore, this is a totally new industry with all its attendant problems. Are you saying that your project will solve all the problems soon and you will be launching the car? How will the car fly? With four propellers? I would think DJI will have more experience in this field.

How about emergencies? Will the car run out of power in mid-air? How about mid-air collisions?

So many countries are legislating drones and controlling its usages. You expect that we can just walk into a showroom to buy a flying car with just some experience in drone flying?

How about traffic lanes in the sky and the submission of flight paths? We are not talking about flying from one international city to another, but flying within a city or a kampung.

How about maintenance? A normal car can be poorly maintained and yet be driven on the road, but a flying car will just drop from the sky.

Lastly, do you think that by just setting up a company, you can conquer the world? You think other car companies with vast resources are not interested? You think other large corporations like the tech giants will not hesitate to venture into this industry if the industry is feasible?

Is this the type of entrepreneurial spirit that you are trying to encourage? It looks to me like it is more an ego trip without any knowledge of the high potential for failure.

But then, you are using our money so there is no pain involved (for you). I expect that you are a typical Umno politician who will likely just give some excuses for the failure and blame it on others.

Your attitude towards the Chinese Malaysiakini reporter is already an indication of how you handle issues.

Anonymous_3f4b: Redzuan, like all other Bersatu ministers, are fools. They are, to borrow the terminology of Youth and Sports Minister Syed Saddiq Syed Abdul Rahman, ‘bodoh sombong’ (foolishly arrogant).

They refuse to take credible findings and conclusions of a reputable UN investigative team on poverty into consideration but wallow in their own myopic and narrow world. ‘Katak di bawah tempurung’, as you might say.

The entire government under Harapan is hopeless – refusing to tackle the real and critical issues affecting the country, but indulging in polemics and inane projects that serve no value and productive purpose, and will instead drain the country further.

Clearwater: If a cow can jump over the moon, why can't a car fly? Going by this nursery rhyme, Redzuan may have a point.