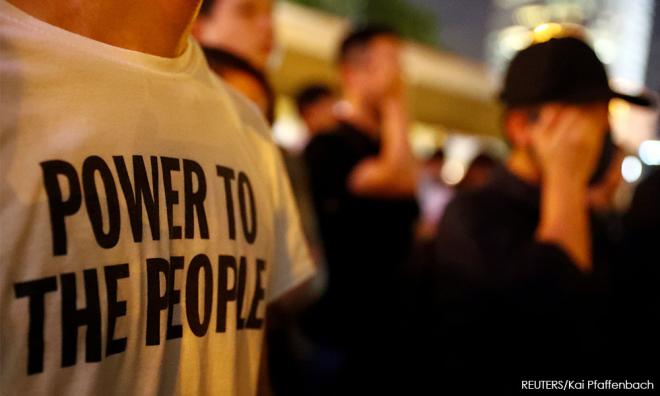 Protesters were expected to gather in downtown Hong Kong today in the latest of a series of anti-government demonstrations that have plunged the Chinese-ruled city into its worst political crisis in decades.

Police blocked plans for a mass show of force marking the fifth anniversary of a decision by China to curtail democratic reforms in the former British colony, which returned to China in 1997.

The Civil Human Rights Front, the organiser of previous mass protests, cancelled today’s demonstration after being denied permission, but not having a permit has not stopped people demonstrating in the past.

“Although organisers said they will cancel the event, we anticipate people will come out,” a senior police official with experience as a commander on the ground during recent confrontations told a press briefing.

“If they come out, we will see how they act. If they do it in a peaceful manner, police will exercise proportionate action to prevent major confrontation. If they still use violence, police have to take proportional action to stop the violence.”

The MTR subway said one station on the western approach to the protest site would suspend operations in the afternoon because of likely “public activities” and that further action was possible.

Hong Kong police arrested a number of prominent pro-democracy activists yesterday, seeking to rein in a movement which started with anger over planned legislation allowing extraditions to mainland China and broadened into calls for democracy.

Joshua Wong (photo), one of the leaders of the pro-democracy “Umbrella” movement five years ago, is the most prominent activist to be arrested since protests escalated in mid-June over fears China is squeezing Hong Kong’s freedoms.

He was charged with inciting and participating in an unauthorized assembly outside the police headquarters on June 21.

The bespectacled Wong, who was 17 when he became the face of the student-led civil disobedience movement in 2014 that blocked major roads for 79 days, has not been a prominent figure in the latest protests, which have no identifiable leaders.

Beijing has also accused foreign powers, particularly the United States and Britain, of fomenting the demonstrations and warned against foreign interference.

“We appeal for restraint on all sides,” she said in Geneva.

There have been frequent clashes between protesters and police, who have often fired tear gas and rubber bullets to disperse crowds, amid accusations of excessive force.

“A lot of people from the outside think it is the police who escalates (the violence) first,” the police officer said. “This is not true.”

With protesters and authorities locked in an impasse and Hong Kong facing its first recession in a decade, speculation has grown that the city government may impose emergency laws, giving it extra powers over detentions, censorship and curfews.