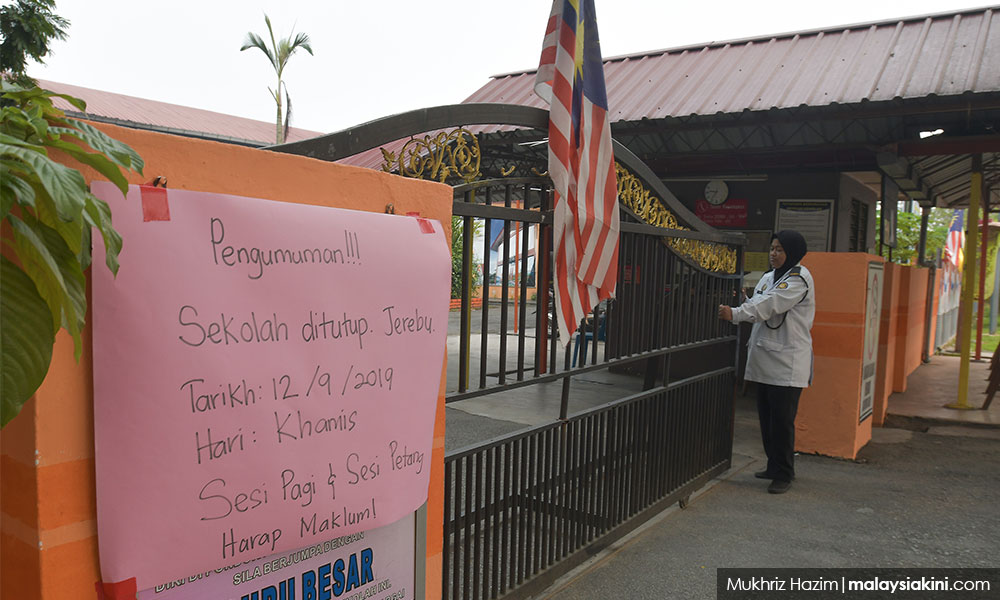 Schools closed in several states, and 9 news from yesterday

1. Schools in several states have been ordered closed for one to two days beginning yesterday due to “unhealthy” air quality, including all schools in Kuala Lumpur, Penang and Putrajaya. Flights were also cancelled or delayed in Penang.

2. An analysis by Malaysiakini and Penang Institute finds that at least 22 percent of the Dewan Rakyat members are on the executive branch’s payroll, raising questions on its efficacy as a check-and-balance mechanism.

3. Several experts gave suggestions on how to improve national-type primary schools, such as through project-based schools or redirecting the schools to focus on the foundational skills of reading, writing, arithmetic and algorithm.

5. Mahathir insisted that his Indian counterpart Narendra Modi did not ask for the preacher Dr Zakir Naik’s extradition at a recent meeting, after Indian External Affairs Minister S Jaishankar reportedly said India is “persistently and relentlessly” pursuing the fugitive.

6. A former aide to former prime minister Najib Abdul Razak told the High Court in Kuala Lumpur about how he led a MACC raiding party to the apartment of fugitive businessperson Low Taek Jho.

7. Activists implored the government to amend the Federal Constitution so that Malaysian women can confer Malaysian citizenship to their overseas-born children.

8. While International Trade and Industry Minister Darell Leiking's six-day trade mission to the US was touted as a success, sources told Malaysiakini that a low point was a meeting with US Trade Representative Robert Lighthizer, who was “unbelievably rude, offensive and without civility”.

9. A viral social media posting claiming that Chinese Malaysian wholesalers were boycotting the produce of Malay farmers in retaliation to the “buy Muslim-made products first” campaign turned out to be untrue.

10. Malindo Airways Sdn Bhd urged passengers to change their passwords if they had reused the same password on the Malindo website with other online services, following a data breach.