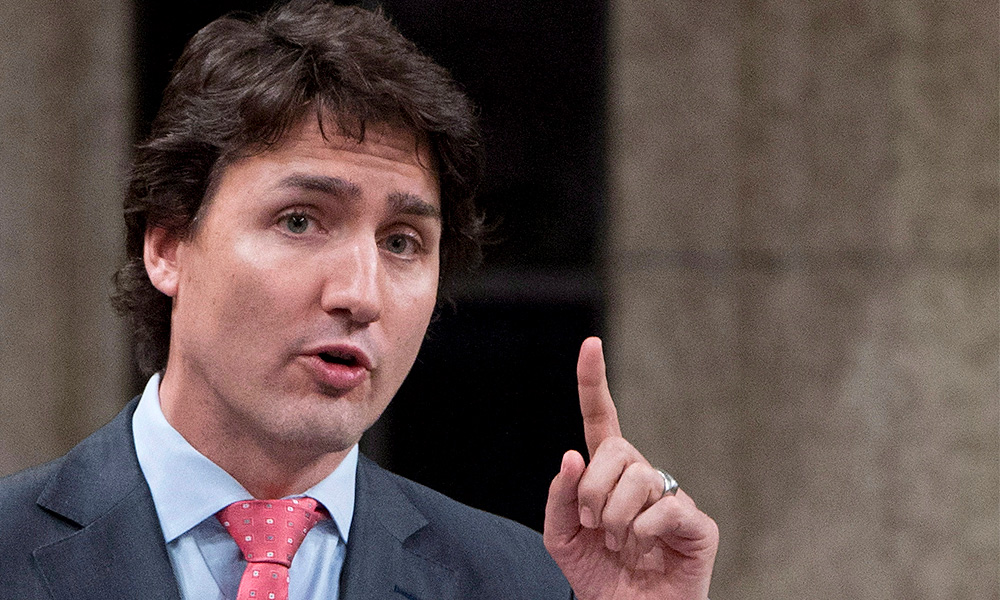 Canadian Prime Minister Justin Trudeau, embroiled in a blackface picture scandal, on Friday pledged to ban military-style assault rifles in the country's most ethnically diverse city in a bid to get his campaign back on issue.

Trudeau was campaigning in Toronto with less than five weeks to go before his Liberals fight an Oct 21 national election and two days after at least two bombshell images of him in blackface emerged, as well as a video showing him with blacked-up face and body wearing a curly-haired wig.

The scandal over the pictures, which could help propel the rival Conservative Party into power, continues to dominate headlines both at home and abroad.

US President Donald Trump, who has clashed with Trudeau in the past, said in the Oval Office on Friday, "I'm surprised and I was more surprised when I saw the number of times."

Trudeau, 47, sidestepped questions both about Trump's comments and whether the affair had damaged Canada's image abroad, repeating that he was very sorry for what he had done when younger.

The first picture that emerged showed Trudeau with his face blackened at a 2001 "Arabian Nights" party when he was a 29-year-old teacher at a Vancouver private school. The picture was published by Time magazine on Wednesday.

Liberals need to hang onto Toronto, Canada's largest city, to have any chance of retaining power. The city has faced a recent escalation in gun violence, which is why Trudeau made his gun ban announcement there.

"Thoughts and prayers aren't going to cut it," Trudeau told a news conference. "We know you do not need a military-grade assault weapon, one designed to kill the largest number of people in the shortest amount of time, to take down a deer."

This month, a 17-year-old was killed by gunfire and five other people were wounded in a community just outside of Toronto. Two days later another person was killed in a shooting on a major highway.

At least four members of Trudeau's cabinet turned up at the announcement to show their support, including Finance Minister Bill Morneau and Foreign Minister Chrystia Freeland (photo) who stood among some two dozen legislators and candidates. Trudeau shook hands or hugged every Liberal on the stage at the end of the event.

In an interview with Reuters on Friday, Freeland said the ban of military assault rifles was "a really important step" and that she was "really glad to serve in a government that is campaigning on that as part of our platform, and I'm proud to be on the PM's team".

"I have tremendous confidence in Justin Trudeau as the leader, as the prime minister," said Freeland, who is a key ally of Trudeau.

Earlier in the day, Trudeau walked down the street in Toronto's Danforth district, where the sitting Liberal member of Parliament faces a tough fight. Most of the people he met seemed delighted to meet him, including a young woman who embraced him four times and posed for a selfie.

Stay-at-home father Stu Simmons said the blackface photo was not important as long as Trudeau did his job.

"I dressed up as The Hulk when I was 18 and no one's going to get mad at me about that, except perhaps the Martians," he told Reuters.

Not everyone was welcoming. "Where's your black face, man?" one woman shouted at Trudeau. "Good morning," he replied.

Liberals said that while the scandal is politically damaging, voters will ultimately be more interested in concrete measures such as the new gun rules.

Those announced on Friday include a buyback programme for all legally purchased assault rifles, and a Liberal government that would also work with other levels of government to give municipalities the ability to further restrict or ban handguns.

When asked about gun control before Trudeau's announcement, Scheer said he does not believe "blanket bans" are effective and that boosting police resources "to go after criminal and illegal firearms" works better.

Trudeau's campaign was upended when Time magazine on Wednesday published the image at the 2001 "Arabian Nights" party. Other images have since emerged, and Trudeau said on Thursday he was "wary" of ruling out the existence of even more because he could not remember those that had already come to light.

On Friday, Trudeau said a video that emerged on Thursday showing him with his arms, face and even parts of his legs blackened came from a costume day when he worked as a whitewater rafting guide on the Red River in Quebec, when he was in his early 20s.