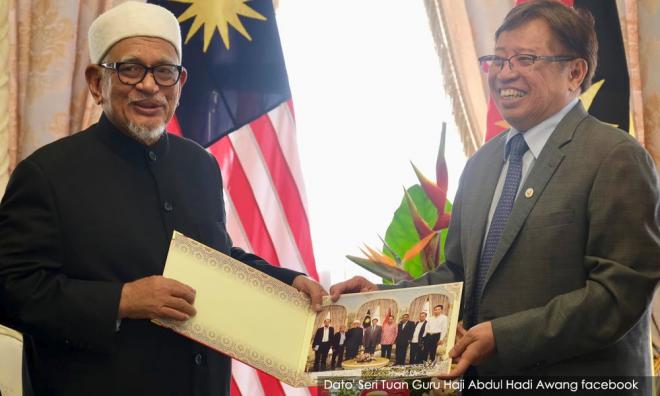 YOURSAY | 'With the meeting between Hadi and Abang Johari, it proves beyond doubt where GPS loyalty lies.'

Anonymous 2413471460628504: How is it all right for PAS president Abdul Hadi Awang to say things like the bumiputras must unite to prevent Chinese control?

Imagine if a Chinese were to say Chinese must unite to prevent Islamisation. The condemnation would be swift, loud and probably the person will be charged and jailed.

But Hadi can say all this with barely a condemnation anywhere. How is it that these people cannot see the unfairness?

They are entitled to everything and to be able to say anything. However, it is "death" to any non-Malays/Muslims who dare to squeak anything remotely similar.

So Islam teaches fairness? Maybe it does, but not the way Hadi and his ilk propound the religion.

Frankie: Indeed, these Malay/Muslim politicians can say anything about non-Malays/Muslims and we've to keep quiet and take it on the chin. To them, it's called fairness.

They're insisting that the Malays are stupid and must be protected, and Islam is weak and must be defended.

Anonymous_1544340881: Oh dear, yes. Beware the Chinese if they take over, they will deprive the Dayaks and natives of all the top civil service posts.

Yes indeed, beware the Chinese, they will be building Confucius and Taoist temples all over Sarawak.

Heaven forbid, beware the Chinese, they control the army and police.

The Chinese will send their Buddhist missionaries to Christian Dayak and Iban areas. Oh, the poor natives of Sarawak, beware of the Chinese.

Just one small question, though. Who at present controls and dominates the civil service? Same as the race and religion that controls the army and police, which is also the same as those who are sending Muslim teachers to Christian areas.

Yes, natives of Sarawak, beware indeed the marginalisation of your people but no need to look so far ahead into the future. Just see what is happening now.

It’s time to settle the Malaysia Agreement 1963 (MA63) issues but with your corrupt state leaders, indeed woe to you, beloved Sarawak. When will your misery end?

Meeting with an Islamist in a state where the majority are not Muslims is a strong sign of fear.

With this meeting between Hadi and Abang Johari, it proves beyond doubt where GPS loyalty lies.

With this, it also proves that something is brewing among GPS, Umno, PAS and Bersatu. What was Prime Minister Dr Mahathir Mohamad’s meeting with them about, with PKR deputy president Azmin Ali in tow?

Is there going to be a new alignment at the next elections, or is Mahathir preparing his own personal agenda?

Constitutional Supremacy: The cooperation between Sarawak and Kelantan and Terengganu is a farce.

Hadi is actually representing Umno, which has a hold on Sarawak PBB through former minister Nancy Shukri as she still supports Najib. Two months back, Nancy invited Najib to Sarawak where he was given a grand welcome.

Thus, Abang Johari cannot be trusted. Harapan may have to take him on in the coming state election.

Abang Johari has always been a diehard supporter of Umno.

Sarawakians are ambitious people and work hard to improve their standard of living, whereas, in the other two states, people pray, marry young, divorce and wait for the government money.

Hadi must be nuts to even think he can work together with Sabah and Sarawak. He will be kicked out, as what happened in Peninsular Malaysia.

Just a Malaysian: It looks like Hadi is the self-appointed prime minister for the opposition. Umno must be very careful.

Hadi will use and discard Umno after it gains power. Umno president Ahmad Zahid Hamidi and Najib are doing everything to stay out of jail, but they will eventually grow a monster they cannot control.

Unspin: There is no doubt that we are looking at the new de facto leader of BN - Hadi Awang. Not only is he parroting the bigotry of Umno in the past, but he is also adding a toxic brew of hatred from his own hypocritical self.

G-Sam: That's true. Umno doesn't have credible leaders anymore. Reasonable leaders like Khairy Jamaluddin get no support whatsoever. Zahid and Najib are both embroiled in court cases. Hadi is the only one left to lead.

Anak JB: A warped racist who used religion to cause racial disharmony. He was supporting a corrupt kleptocrat and got paid off with dirty laundered money in the process.

Denials and lying through his teeth on not paying off Sarawak Report editor Clare Rewcastle for the out-of-court settlement, only to be caught with his pants down. Shame on you!

Prudent: This picture (of Hadi and Abang Johari) is worth more than 100,000 Sarawakians' votes.

That is at least the number of votes I think GPS will lose in 2021 as a result of the negatives from the above picture.

Vgeorgemy: Hadi wants to import the lifestyle of PAS - an extravagant lifestyle for the leadership while the grassroots struggles in poverty - to Sarawak.

The regime in Kelantan is well known for its criminal neglect of the original inhabitants. Hadi has come with such criminal intentions to Sarawak.

The natives in Sabah and Sarawak are smarter. Everybody knows what sort of people Hadi and his supporters are.