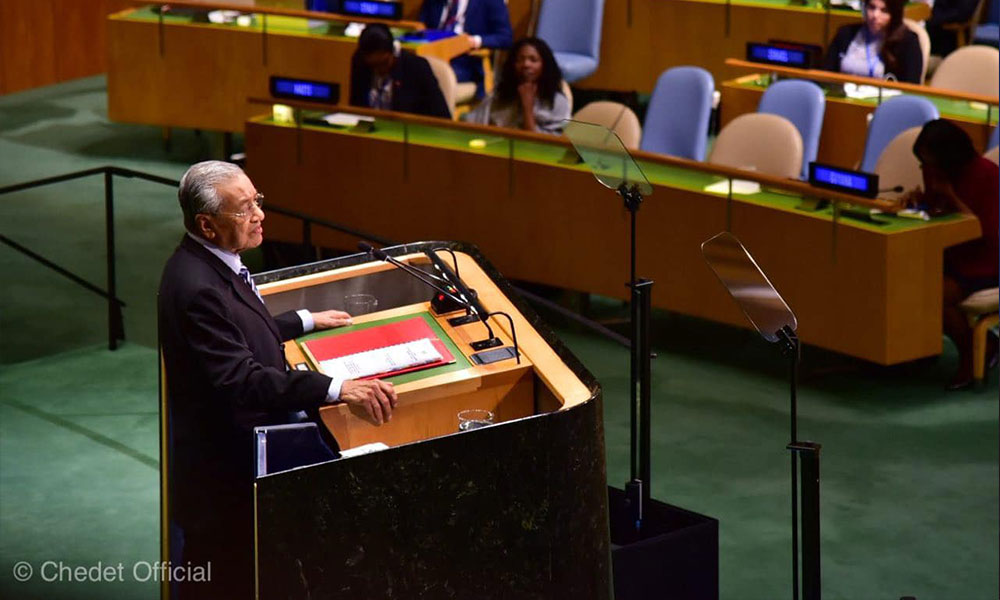 Malaysia succeeded in highlighting the country’s foreign policy agenda and priorities during its participation in this year’s United Nation General Assembly (UNGA), Wisma Putra has said.

In an overview of Prime Minister Dr Mahathir Mohamad's working visit to the 74th UNGA session in New York, which began on Sept 17, the Foreign Ministry said Mahathir spoke on various international issues, including on the Rohingyas, the Palestine-Israeli conflict, as well as Jammu and Kashmir.

Mahathir also addressed “baseless and unjustified” claims of deforestation in regards to palm oil, of which Malaysia is a major producer.

The UNGA is slated to end tomorrow.

Below is the overview of Mahathir and Foreign Minister Saifuddin Abdullah’s working visit, as provided by Wisma Putra:

Mahathir led Malaysia’s delegation to New York in conjunction with the 74th Session of the UNGA from Sept 24 to 28. He was accompanied by his spouse, Dr Siti Hasmah Hj Mohd Ali, Foreign Affairs Minister Saifuddin Abdullah (below); Economic Affairs Minister Azmin Ali, and senior government officials.

The PM touched on the Palestine-Israeli conflict, the fate of the Rohingyas, and the situation in Jammu and Kashmir, which he hopes would be resolved by peaceful means.

On the issue of palm oil, the prime minister said linking the production of palm oil to deforestation was baseless and unjustified. A key message of the national statement is for the international community to pay attention to climate change and natural disasters, instead of preparing for war. The prime minister also touched on trade, sanctions and capitalism, as well as on selectivity in the application of the rule of law.

Apart from the general debate, the prime minister participated in the high-level side event entitled “Rohingya Crisis – A Way Forward”, in which he expressed hope that the international community would do more to end the misery that has befallen the Rohingyas.

During the Sustainable Development Goals (SDG) Summit Leaders Dialogue 6 on “The 2020-2030 Vision” and the side event on "Environmental Stewardship in Addressing Poverty to Achieve Sustainable Development for All", the prime minister stated that the 17 SDGs will continue to be embedded within Malaysia’s latest long-term plan of the Shared Prosperity Vision, 2021-2030.

While in New York, the prime minister attended a dialogue session at the World Leaders Forum at Columbia University and had a session with members of the Council on Foreign Relations. He also met renowned entrepreneurs and potential investors during the JP Morgan investor luncheon, and the roundtable meeting with the US-Asean Business Council and the US Chamber of Commerce. He was interviewed by several international media organisations, such as the Wall Street Journal and Oxford Business Group.

Meanwhile, the foreign minister participated in the high-level meeting on 'Universal Health Coverage' and a number of other ministerial-level meetings involving Asean, OIC, the Commonwealth, as well as the Asia Cooperation Dialogue.

He also participated as a panellist at the ministerial side event jointly organised by Colombia and Peru, entitled “United Nations General Assembly Special Session 2021 on Corruption: A Path Forward to Enhance and Strengthen the International Anti-Corruption Legal Framework”.

Overall, Malaysia’s participation at the 74th UNGA successfully promoted the nation’s foreign policy agenda and priorities to the international community. Malaysia’s statement at the UNGA General Debate was also very well-received. This was evident by the applause at the General Assembly Hall and the number of representatives from UN member states that stepped forward to congratulate the PM after delivering the national statement.

True to its commitment as a responsible member of the international community, Malaysia will continue to support the central role of the UN as the most constructive multilateral platform in the maintenance of international peace and security.