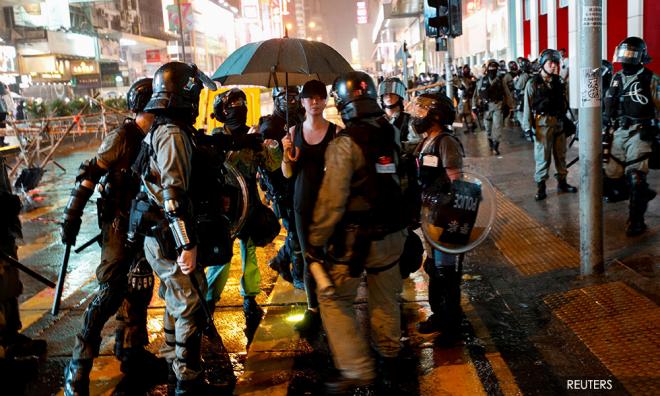 Hong Kong pro-democracy activists plan a rally on Monday evening after another weekend of unrest that saw protesters hurl petrol bombs and police reply with tear gas and rubber bullets, as violence in the Chinese-ruled city shows no signs of letting up.

Activists said they planned to gather at Chater Garden in Admiralty district near government headquarters at 1100 GMT, a day after demonstrators rampaged across the territory.

Peaceful rallies descended into chaos on Sunday as activists and police clashed in chaotic scenes across the Asian financial hub. In one of the worst incidents, an officer was slashed in the neck by a protester and taken to hospital.

Demonstrators in the New Territories district of Tseung Kwan O attacked two plainclothes officers who they hit repeatedly on the head with hard objects, police said. The officers were taken to hospital with head injuries.

Protesters threw more than 20 petrol bombs at a police station in the gritty working-class district of Mong Kok across the harbour in Kowloon, and vandalised metro stations as well as mainland Chinese businesses or those deemed pro-Beijing.

Demonstrators again targeted railway operator MTR Corp, which they accuse of colluding with the government and police by shutting some services early.

The rail network resumed operations on Monday although maintenance work was underway at some stations that had been vandalised.

All train services were due to stop for maintenance at 10 p.m. (1400 GMT) on Monday, except the Airport Express Line.

Embattled Hong Kong leader Carrie Lam (above) is due to deliver her annual Policy Address on Wednesday amid pressure to restore confidence in the government as it grapples with the city's biggest political crisis in decades.

The protests were sparked by a now-abandoned extradition bill but have widened into a pro-democracy movement and an outlet for anger at social inequality, in a city with some of the world's most expensive real estate.

The government said late on Sunday it found it "baffling" that visiting U.S. Senator Ted Cruz said he had not seen any violent acts by protesters.

"While we respect the freedom of speech of foreign politicians, we consider that comments should be based on facts," the government said.

"Everyone can see from media reports that violent protesters conducted violent and vandalistic acts on many occasions in Hong Kong in recent months."

Cruz said on Saturday that Lam had scrapped a meeting with him. He did not give a reason why but said Lam's office had requested that the meeting be confidential.

The government said the meeting was cancelled because Lam had another commitment.