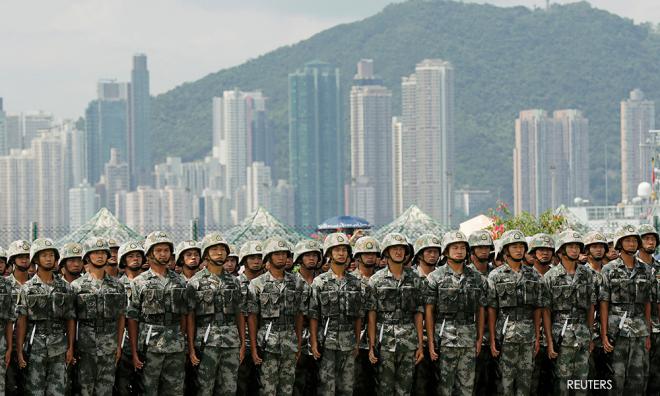 I do not rule out China's intervention: Carrie Lam

Hong Kong's Chief Executive Carrie Lam on Tuesday said she did not rule out the option of the Chinese government intervention to tackle the ongoing protest if the situation becomes so bad, Anadolu Agency reported.

On Tuesday, speaking at a news conference streamed live from her office by Channel News Asia, Lam claimed that her administration had no plans to use emergency powers.

"I still strongly feel that we should find the solutions ourselves. That is also the position of the central government -- that Hong Kong should tackle the problem on her own.

"But if the situation becomes so bad then no options can be ruled out, if we want Hong Kong to have at least another chance," she said.

She also touched on a recent ban on using face mask, claiming the ban was effective and it was too early to cast doubts on the colonial-era law.

She admitted that there would be some complications and misunderstandings while enforcing the new legislation.

Lam (below) said her government would take necessary measure to provide for some legitimate defences and exemptions for certain categories of people.

"When I announced the (mask ban) on Friday, I said it had at least two purposes, the first is to help the police to identify individuals and enforce the law.

"The second -- which I think is more important -- is its deterrent effect," she said.

Hong Kong, an autonomous region under China since 1998, is witnessing protests since early June, against the Lam administration’s move to legalise extradition to mainland China.

Even as the bill was officially dumped, the protests continued unabated.

Lam had invoked a colonial-era Emergency Regulations Ordinance last week, first time in over 50 years, imposing ban on wearing face masks, in order to curb unrelenting protests in the region.

Since Saturday when face mask ban was imposed, at least 16 people have been indicted for violating the ban, daily South China Morning Post reported.

Earlier, two people identified as Ng Lung-ping, an 18-year-old male university student and Choi Yuk-wan, a 38-year-old woman, were arrested for defying the ban, but the court had granted them conditional bail.